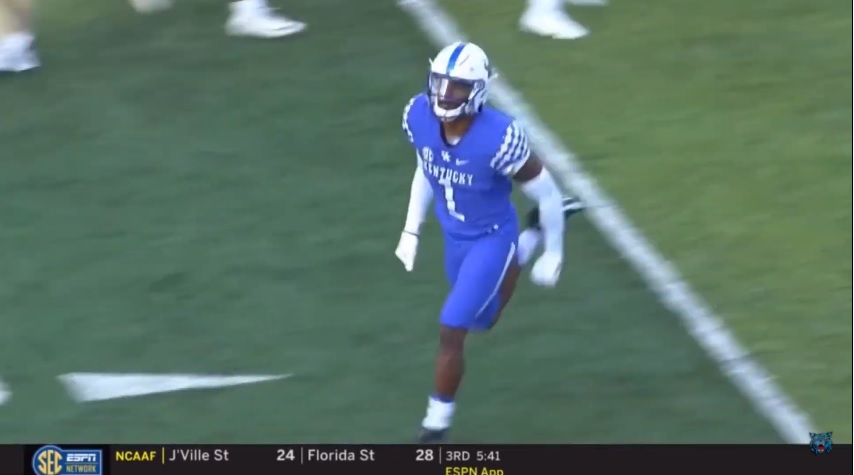 In the wake of Cameron Sutton’s crucial resigning, cementing the Steelers with two outside starters and a starting caliber slot corner, depth at the position remains underwhelming with two unproven names in Justin Layne and James Pierre.  Today, we’ll look toward another mid round target at the position, Kelvin Joseph out of the University of Kentucky.  Although only producing one season of starter level tape, the 21 year old underclassmen showcased enough coverage ability and turnover production against high level SEC competition to warrant hefty draft buzz.

Gifted with ideal measurables and athleticism, Joseph is routinely able to carry receivers vertically with ease, using his large frame to reroute receivers and box them out at the catch point.  In the first clip, aligned in off man coverage against 2020 Heisman Trophy recipient Devonta Smith, Joseph initially bites on an out and up double move, however, proper eye discipline allows him to locate the near hip and smoothly transition to carry the receiver vertically.  At the catch point, Joseph squeezes Smith toward the sideline with an impressive look and lean, using his large frame to box out the talented receiver and secure a timely interception.  Later in the game, deployed in a deep 1/3 zone assignment out of a Cover 3 scheme, Joseph once again squeezes Devonta Smith to the sideline with a smooth look and lean, disrupting the timing and causing the route to fall harmlessly to the turf.

While larger framed cornerbacks can appear flat footed at times in off coverage, Kelvin Joseph’s click and close ability is undeniably one of standout traits in his game.  Against Tennessee, aligned in man coverage against a stack, Joseph displays great patience, widening to match the receivers release before executing a textbook T-step break to undercut the out route and race to the end zone, producing the games first points in the process.

Equally adept in press coverage, Joseph is able to suffocate receivers off the line with a combination of fluid hips and advanced hand usage.  In the first clip against Alabama, Joseph smoothly executes a mirror press before opening explosively to deploy a physical two hand jam at the top of the slant route, ultimately getting his left hand across to secure an impressive pass breakup.  In the next clip, aligned to the top of the screen against Georgia, Joseph plays with heavy inside leverage off the snap, squeezing the receiver outside of the numbers with a two hand jam, turning into the receiver to check for  a back shoulder throw, and ultimately drifting toward the sideline to secure an impressive, toe-tapping interception.

While a lack of functional strength limits Joseph’s effectiveness as a run defender, a solid football IQ and consistent desire to contribute in the box encourages me to believe that he has room to grow in this area. Working out of press coverage against Georgia, Joseph matches the receivers inside release before identifying the crack and replace, stepping up to fill off the edge, and shooting low to cut down the back after a miniscule gain.

Although the desire is certainly there, more often than not, as previously mentioned, a lack of functional strength limits his ability to finish tackles, both in the box and in the open field.  In the first clip, deployed in deep 1/3 zone coverage against Alabama, Joseph drops his eyes upon contact, shooting low and whiffing badly on the open field hurdle, allowing for 10 extra yards on what should have been a routine stop.  Later in the game, aligned as the overhang defender to a tight formation, Joseph steps up to successfully fill the D-gap, yet whiffs on a shoestring tackle attempt, allowing Najee Harris to stumble for a healthy, eight yard gain.

While Joseph is an extremely consistent player in coverage, like many young prospects at the position, occasional lapses in eye discipline can leave him vulnerable against advanced route runners.  Aligned in man coverage against Florida’s All-American tight end, Kyle Pitts, Joseph bites hard on an outside stem, allowing the talented tight end to cross his face over the middle, creating separation for a 60 yard touchdown on the catch and run.  Although a tough task when operating out of outside leverage, ideally you would like to see Joseph seek contact at the top of the route to disrupt Pitts timing and remain in phase on the break.

Overall, Kelvin Joseph enters the 2021 draft as a desirable mid round prospect who will impress teams with his polished and versatile coverage ability.  Nonetheless, a clear lack of functional strength means that he will likely need a year in the weight room before he is able to contribute successfully as a tackler, both in the box and the open field.  That being said, Joseph’s ideal fit comes in a single high-centric team, operating mainly out of Cover 1 and Cover 3 concepts, namely Pittsburgh, San Francisco, or Seattle.

If drafted to Pittsburgh, Joseph would likely exit camp as the team’s number four cornerback on the depth chart, serving on special teams and working toward carving out a boundary role in dime sets.  Moreover, in the event of an injury to Steven Nelson, Joe Haden, or Cam Sutton, Joseph could move into a role as a boundary cornerback in the team’s Nickel package.  In an ideal world, Joseph’s game reminds me a lot of Darius Slay, where both players are extremely effective in off coverage, possessing great agility and ball skills for players of their stature.

Although a lack of collegiate film, with only one season of true starter production, could limit some teams interest, Kelvin Joseph has all of the tools to develop into a pro bowl caliber player on the boundary.  While a lack of functional strength will limit his ability to contribute heavily in year one, Joseph’s upside will certainly make him tough to pass on in the mid rounds.  With the Steelers more than likely to spend at least one pick at the position, an extremely athletic and polished underclassmen prospect, such as Kelvin Joseph, could be in play for Colbert and company at the right value.