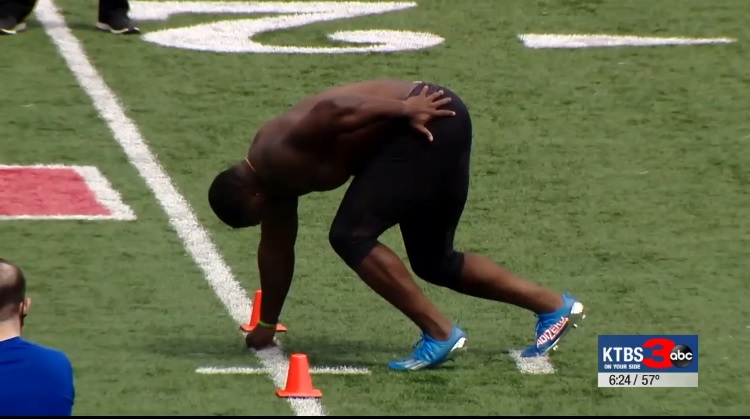 Louisiana Tech recently had their Pro Day and the Steelers had two staff members on site including defensive line coach Karl Dunbar. The star of the day was defensive lineman Milton Williams who put up impressive agility and strength numbers.  He played primarily as the 3 tech for the Bulldog defense but was also used inside and on the edge when rushing the passer.

As a pass rusher, he has solid quickness at the snap, good pad level and good hand placement on his initial punch and active hands to counter those of the blocker.  He uses quickness along with clubs and swims to win around guards and has good acceleration to the QB. On some passing downs they would move him inside and put him over the center or they would put him on the edge in a 2 point stance and he displayed a solid speed to power rush to close the pocket.

At UTSA, he will use a club on the left guard giving him a clear lane to the quarterback.

Vs UAB, in this clip he is in a 2 point stance on the left edge and will use a speed to bull rush in the right tackle.

At North Texas, he gets up field with eyes on the right guard but absorbs the block coming from the center to spin inside and make the sack.

Vs UAB, a very good initial punch to get the right guard off balance and leverage him back to the quarterback.

Vs Georgia Southern, he will use a jab step to the left and a swipe of the hands to win to the inside and shows good acceleration to the QB.

Against the run, he has solid snap quickness and fires out with good pad level and hand placement getting his hands under the pads of blockers to lift and control blockers. When engaged in one on one blocks he has good play strength to reset the line of scrimmage and to shed and make tackles within his gaps.  Good short area quickness and uses his hands well to work over blocks between gaps. He has solid mental processing and good lateral agility to read and slide with outside blocking schemes.

Against UAB, he uses his low pad level and hand placement to knock back the right guard and sheds him to make the tackle.

Against UAB, he does a nice job to avoid the cut block and he works through traffic down the line of scrimmage and makes the tackle for a loss.

Vs Georgia Southern, he is taking on the left guard and quickly sheds him inside to make a stop in the backfield.

Improving snap quickness would increase his effectiveness. Change of direction in the backfield is marginal. Pass rush play is developing and doesn’t have a go to move and needs to improve on his counters when the first move is unsuccessful. Was used as a looper on twists and stunts but was generally not productive.  Can get stuck on blocks trying to control bigger lineman. He didn’t make a lot of plays outside the tackles. His lack of length shows up when trying to tackle from the backside. Poor anchor versus double team blocks and gets cut off by down blocks.

Vs Georgia Southern, here are few examples of him versus double teams. The effort is there but he can’t help but give up ground and get spun around.

Overall, Williams plays with good pad level, hand placement and leverage to handle bigger opponents.  He has good short area quickness and heavy hands to create rushing lanes and against the run he has the strength to stack and shed blockers and make plays within the tackles. Area of improvement include his snap quickness, developing a go to pass rush move and handling double team blocks.

Williams tested very well and his agility showed up in most of the games watched. He was listed at 278 on his college roster and was 284 at his Pro Day which could indicate teams have asked him to gain some weight to hold up inside. Which leads to the question of what is his position?

If he can add more weight he can fit as a 3 tech in an even front. At his current weight some teams may see him as a strong side defensive end in an even front.  For the Steelers he doesn’t currently fit what they do.  He would need to add at least 20 pounds to pay inside and he doesn’t have the length to play behind Cam Heyward and Stephon Tuitt (his arms are about 3 inches shorter).  The last defensive lineman they drafted of similar size was Ryan McBean in 2007. But the team did show interest and I’m sure they’ll have a plan if they take him.