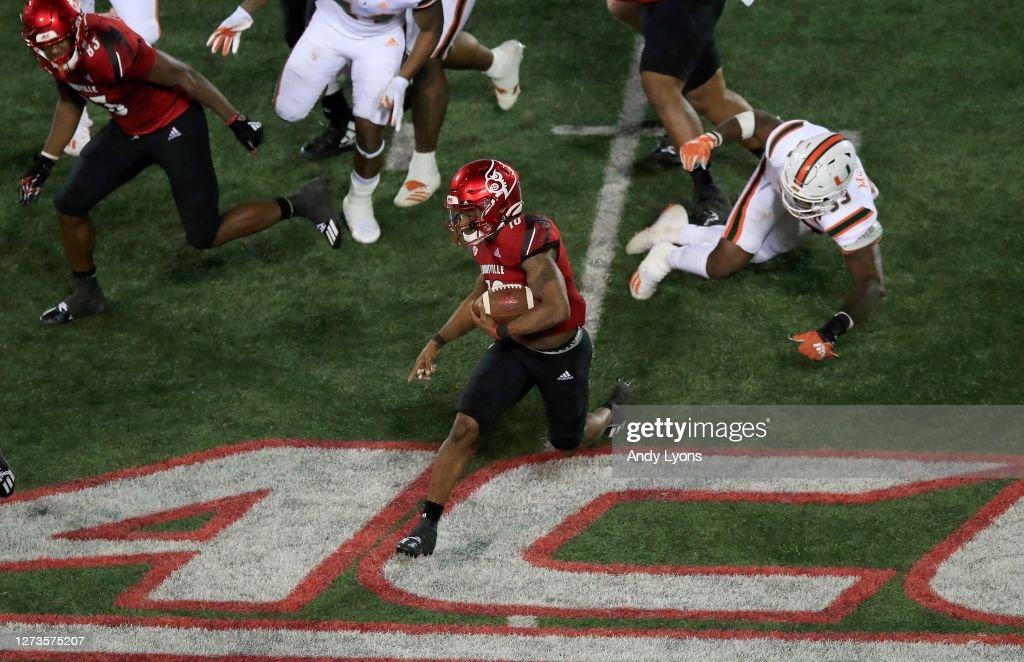 -Quick, elusive playmaker with legitimate home run speed out of the backfield
-Rare acceleration for the position; consistently finds another gear
-Excels on outside runs where he can plant and go around the corner
-Good overall vision and showed improved patience in 2020
-Flashed strong hands in limited reps in passing game
-Dynamic, twitchy athlete that is an angle destroyer
-Underrated strength as a runner in tight

-Small, slight build for the position that won’t allow him to handle heavy workload
-Lacks overall contact balance and gets cut down too easily by secondary defenders
-Tends to freestyle too much in the backfield
-Searches for home run on every touch; needs to learn to take what’s there
-Willing pass protector but does not have the strength to hold up
-Route tree is almost non-existent

-Played in 23 career games for Louisville
-Rushed for 2,355 yards and 16 touchdowns on 399 career carries
-Added 21 career catches for 189 yards
-Recorded career year in 2019, rushing for 1,525 yards for the most by a running back in school history
-Named Second Team All-ACC in 2019
-Ended up opting out of rest of 2020 season in late November
-Nickname is “Playstation”

Nicknamed “Playstation” Louisville’s standout running back Javian Hawkins sure lived up to the video game moniker throughout his Cardinal career, rushing for 2,355 yards on 399 touches, including a single-season Cardinal record 1,525 as a redshirt freshman in 2019.

At just 5’9”, 185 pounds, Hawkins has a slight build, but he is most certainly one of the fastest — if not the fastest —running back in the 2021 NFL Draft class.

While he doesn’t have the best vision in the class and really tends to freelance far too often due to his speed and home run propensity, Hawkins feels like a legitimate No. 2 running back in the NFL that can be a real weapon and change the pace for opposing defenses.

Hawkins’ long speed is absolutely incredible. He’s small in stature, but he has long strides and simply destroys angles defenders may have on him anywhere on the field.

While his speed is a real weapon, some of the long touchdowns I saw from him — like the one above — didn’t’ require much creativity from him. He has a massive hole in front of him and is able to explode right away.

I do like Hawkins’ ability to make guys miss in tight. Sure, he’s known for his speed, but he’s a shifty player overall. He has great lateral explosiveness and is able to make himself small, taking away the strike zone for defenders.

Possessing great footwork helps him force missed tackles in tight, which should play well at the next level as a weapon.

While he does tend to freestyle a lot with the football, I was pleased with the improved patience Hawkins displayed in 2020.

Here against Virginia in 2019, Hawkins displayed some patience early in the touch to let the hole develop, and then showed good burst and late-carry power to slip through the gap and score.

Similar run here against Georgia Tech in 2019 for Hawkins.

Initial patience early with the football, and then shows great burst to put his foot in the ground and glide through the hole, flying into the second level of the Yellow Jackets’ defense for the big gain.

I’m not a huge fan of his contact balance, as I saw him get cut down far too easily on runs, but this play against Florida State in 2020 shows he’s able to bounce off of contact below the waist.

One he bounces to the outside, he’s able to hit another gear to take away the angle and dive into the end zone for the score.

I do like Hawkins’ vision overall. He doesn’t panic when things break down, which allows him to search for lanes and get up the field in a hurry. While he tries to hit the home run far too often, I loved this run from 2019 against Boston College.

He gets bottled up in the backfield, but stays patient, finds a lane and glides through the Eagles’ defense for the explosive run.

Overall, I really like Hawkins skillset for today’s game. Speed kills, and his ability to take a touch to the house is terrifying for defenses. That said, he is not a feature back in the slightest at the next level, and really shouldn’t receive more than 10-12 touches a game.

He could make an impact as a kick returner in the right situation and serve as a strong change of pace back. He reminds me a lot of current Steeler Anthony McFarland Jr.