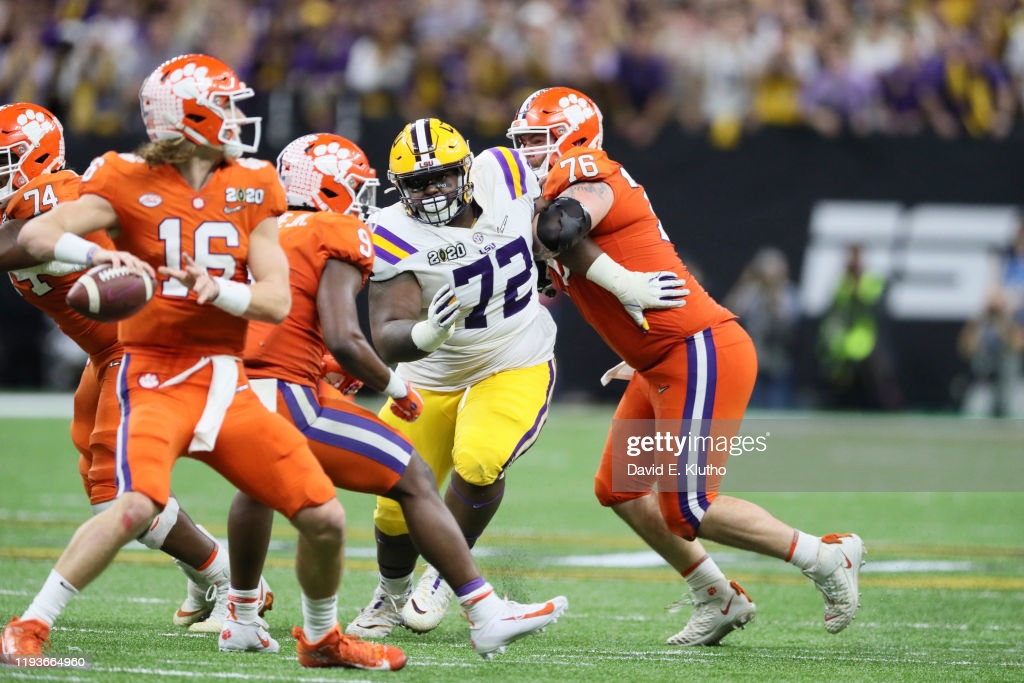 -Massive presence on the interior of the defensive line
-Well-built player with ample thickness in both upper and lower body
-Stout player against the run
-Plays with great strength and is nearly impossible to move off of his spot
-Routinely draws attention from two offensive linemen, allowing linebackers to run and make plays
-Uses his eyes well to read blocks and diagnose in the run game
-Will overpower single blocks in the run game, pushing blockers back into the backfield or shed them fairly easily
-Does well using his hands to stack and shed blockers at the line to get off blocks
-Has a great long arm move to shock blockers back and the heavy hands to get blockers off of his frame
-Can collapse the pocket as a pass rusher
-Has an impressive motor for a man on his size and plays with great effort
-Impact is made far beyond the stat sheet
-Has experience playing on special teams units

-Ranked #1 player in the state of Louisiana and a 5-star recruit in the 2017 class
-Member of the boys’ basketball team at Notre Dame HS
-Redshirted his first year on campus
-Found some playing time as a redshirt freshman in 2018, notching nine total stops, 1.5TFLs, and 1.5 sacks in 6 appearances
-Played in 14 games with 13 starts at nose tackle as a redshirt sophomore, racking up 39 tackles and three TFLs along with two pass breakups
-Opted out of the 2020 season and declared for the 2021 NFL Draft

Tyler Shelvin from LSU took the year off after winning a National Title back in 2019. While he wasn’t often recognized for his efforts on the basis of tackles or sacks, there is no denying Shelvin’s impact on the Tigers’ defense. Shelvin is a mountain of a man with the size and girth teams looking for a big body in the middle are going to love. He is built to be a plugger against the run and eat up space. When Shelvin plays with leverage and low pad level, he’s nearly impossible to beat. He has a strong base that doesn’t give much ground to blockers and powerful hands that can shock blockers back, resulting in no movement up front or in him being able to shed blocks effective with his hand usage. Here is a great example vs the Crimson Tide where he gets a great get off on the snap, plays with great pad level, and shocks back #69 Landon Dickerson with his punch, causing him to get extended, lose balance, and fall over which limits the push up front by the offensive line and results in the defense getting into the backfield for the big stop.

Not only does Shelvin’s frame aid in his ability to beat single blocks, but he also is the perfect option to take on double teams and be a space eater against the run. This also can be an asset on passing downs too, freeing up backers coming on the blitz to sneak through with the immediate threat of Shelvin rumbling forward being the utmost concern with blockers. Here Shelvin takes on both the LG and C, freeing up his linebacker coming on the blitz to loop around and force the QB to throw the ball early while landing a big hit on the passer.

Here is another example against Clemson where Shelvin takes on the double team and forces the ball to come out fast with the pressure. On the snap, he hits the center with the long arm and immediately starts pushing the center back. The RG comes in to help, but Shelvin rips his arm through the center and extends the guard away with his left arm, splitting the double team and collapses the pocket on #16 Trevor Lawrence. Sure he doesn’t get home on the play, but as a run-stuffing nose tackle, Shelvin shows his ability to be disruptive in the passing game as well, even though that may not always show up on the stat sheet.

Here Shelvin shows his ability to read and diagnose the play in the run game. He is very aware as a run defender and eat up the block and man his gap before shedding and committing to pursuit. On this play, he hits Dickerson with the long arm and fights the block down the line, crashing the line down into the back. He would then rip off the block and get in on the assisted tackle.

While Shelvin has shown the ability to win with his size and strength, don’t let that confuse you into thinking the guy can’t win with finesse as well. He has good hand technique and burst for a man nearly weighing 350lb and can be quick off of the ball at times to blow up the play before it starts. Here against Alabama, Shelvin shows great burst off of the snap, getting the quick swim move over #69 Landon Dickerson, getting a quick knock on #74 Jedrick Wills to keep his spot in the middle of the gap and catch #22 Najee Harris in the backfield for no gain.

Shelvin shows great pursuit for a man of his size carrying around that much weight. His motor runs hot, and he often plays like his hair is on fire; a quality you don’t often see in a nose tackle. Here he gets off the block on this pass rush rep, but the ball comes out quick. Shelvin then redirects, turns and runs to pursue the ball, and jacks up Deonte Brown, who is a mammoth of a man in his own right, while playing chase of the football.

Despite Shelvin being a massive human being that is difficult to move off of his spot, he has some cleaning up he needs to do on his technique against the run in order to take his game to another level. He will sometimes give up leverage to the blocker, allowing them to work their shoulders around to create a seal in the run game. Here against Landon Dickerson, Shelvin engages well off of the snap, but allows Dickerson to get better leverage underneath him, thus allowing Dickerson to turn him and drive him back. Sure, the back doesn’t get very far and Shelvin does eventually disengage and gets in on the play, but a player of his size and strength shouldn’t give ground like that to a high-cut center. Should he play with better pad level, Shelvin should be a favorite to win most of these situations.

Another example where Shelvin gives up leverage against the run in the same game, getting his inside shoulder turned by the center, creating a hole for Najee Harris to run through for a big run nearly resulting in a 1st down.

Overall, Shelvin may not be the most productive pro in terms of his stats, but his impact in the run game and ability to eat blocks and free up other defenders to run and make plays cannot go understated. He is a true mismatch against single blockers and can win against double teams as well, making him a great asset to have against the run. Shelvin needs to improve his technique and consistency with his pad level and hand usage, but he’s hard to stop when both of these are on point, not to mention the effort he gives on a play-by-play basis to run and chase the ball. Should Pittsburgh search for a difference maker against the run and to help free up the likes of Tuitt, Heyward, Watt, and Highsmith to get their 1-on-1s. Shelvin could very well be in the cards.

The team obviously has a need up front with the loss of Tyson Alualu, and Shelvin could definitely provide help in the area Alualu did as a stout run defender and a guy that can play on passing downs to free up others to make plays. They are completely two different players with different styles, as Shelvin compares more to a player like Dexter Lawrence for the Giants but can fill the mold as that man in the middle and more resemble the old mold of Pittsburgh nose tackles in the past like Casey Hampton. The lack of pass rush upside will be a strong consideration for Pittsburgh, but Shelvin has the traits and can play the role that Pittsburgh is looking for in the middle of their defense.