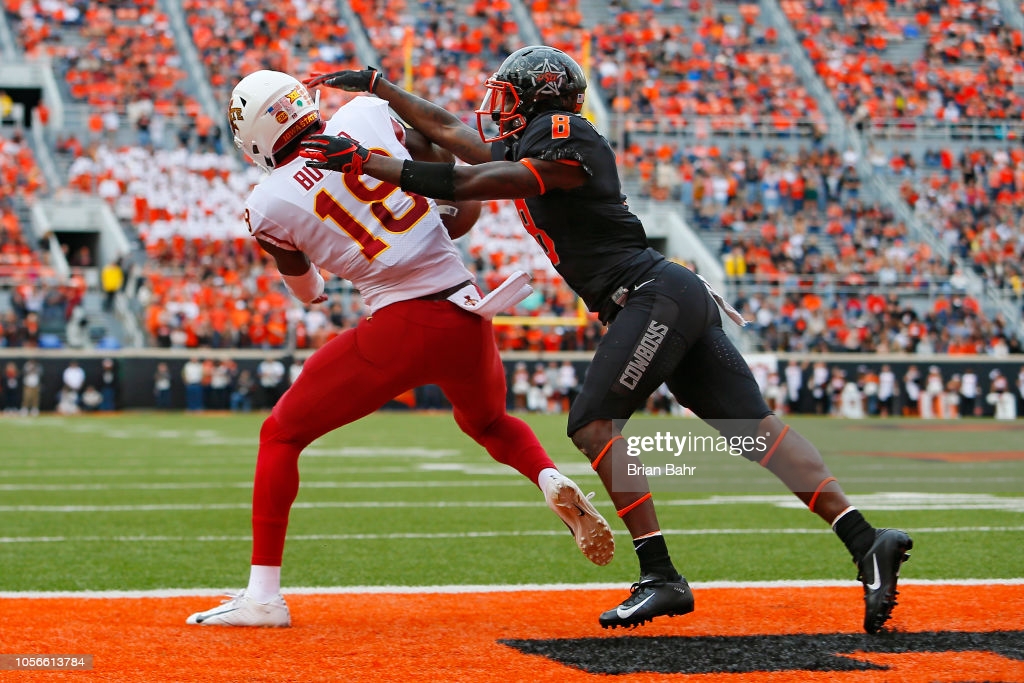 Following a 2021 offseason which has seen massive upheaval at the cornerback position, with the resigning of Cam Sutton alongside the losses of starters both in the slot and on the boundary in Mike Hilton and Steven Nelson, cornerback has vaulted to become a top priority for Pittsburgh ahead of the draft.  As Sutton can provide solid play from both the slot and boundary positions, Colbert and company will not be limited to a certain prototype cornerback in the draft, although it could be a safe bet to assume the position will be addressed in the first three rounds.  Today, we’ll be taking a look at an intriguing mid round boundary prospect with plenty of length and coverage ability, Rodarius Williams, a 24 year old redshirt senior out of Oklahoma State.

The older brother of Cleveland Browns 2019 second round selection Greedy Williams, Rodarius profiles similarly to his younger brother.  While he doesn’t appear to match the blazing long speed of his younger brother, Rodarius possesses far more refined coverage technique and physicality than Greedy.  While critics will likely cite lack of turnover production, Rodarius recorded a healthy 27 pass breakups across his four years as a full time starter and finished his final collegiate season without allowing a single touchdown reception in 255 coverage snaps, per PFF.

In viewing Williams film, it becomes immediately apparent that his combination of speed and length allow him to carry receivers vertically with ease, particularly out of press coverage alignments.  In the first clip from a 2019 contest against the Texas Longhorns, Williams, aligned in press coverage with outside leverage, matches the receivers inside release, quickly locating the near hip, before turning to locate the football, and seamlessly beating Malcom Epps to the catch point, and nearly corralling the overthrown pass.  In the next clip, from a 2020 game, once again against Texas, Williams once again aligns in press coverage to the field side, this time aligning with inside leverage.  At the snap, Williams patiently gives ground with a smooth motor press before flipping fluidly to carry the nine route, locating the near hip, squeezing the receiver to the sideline, and turning to locate the football in phase, causing the pass to fall harmlessly to the turf.

Possessing one of the best press coverage skill sets in the 2021 draft, Williams’ combination of length, physicality, and advanced footwork allow him to suffocate intermediate routes out of press alignments.  Once again aligned in press coverage against Malcom Epps, Williams stays patient at the snap before matching an inside release with an off hand jam, getting two hands connected to eye the quarterback, and smoothly undercutting the route to produce an impressive breakup, which was corralled by his teammate for an interception.  In the next clip, aligned to the field in a 2020 matchup against the rival Oklahoma Sooners, Williams matches the receivers outside release off of the line, staying in phase and high pointing the football to record a nice pass breakup, preventing the hole shot.

Predictably, Williams length, physicality, and press coverage acumen make him a tough player to target in the red zone, as evidenced by his zero touchdowns allowed in his redshirt senior season.  Aligned to the boundary in a 2020 matchup against Texas, Williams aligns in press coverage with inside leverage, missing on a right hand jam before flipping his hips effortlessly, getting to the receivers upfield shoulder with a two hand jam, and undercutting the route to secure the timely pass breakup.

While many young defensive backs revert to panic when attempting to contest vertical routes from out of phase, resulting in repeated pass interference penalties, Williams constantly plays with confidence and poise in these situations, rarely showing said panic.  In a 2019 rep against Texas receiver Malcom Epps, Williams gets caught flat footed and plays with high pad level against the stutter and go, allowing downfield separation following a choppy transition.  Nonetheless, Williams shows no hesitation, closing ground to Epps near hip rapidly, staying patient, and finishing with a physical right hand chop through the receivers pocket to force an incompletion on the vertical target.

Though not necessarily the most technically sound tackler at the position, Williams carries a physical demeanor and consistently shows a desire to get involved as a tackler, both in the box and in space.  In a 2020 matchup against Texas, Williams follows motion into the box before diagnosing the backside H-back slipping to the flat, scraping over the block, closing downhill rapidly, and shooting low to stop the catch short of first down yardage.  On the next rep, from a 2019 matchup, also against Texas, Williams, aligned as the overhang defender to a nub tight end set, steps up to fill contain, before showing toughness, shooting low to cut the pulling guard, forcing the back to stop his feet and cut back toward the waiting arms of his teammates.

While Williams physical demeanor shows when he is able to avoid blockers in space, the two glaring weaknesses in his game are his inability to shed blocks in space along with his occasional lapses as a processor in coverage.  In the first rep, aligned in press coverage to the field, Williams follows an inside release, failing to diagnose the crack and replace situation in time, and thus being out leveraged to the sideline, leading to an easy score for the Sooners.  On the next rep, from his 2019 season against Texas, Williams aligns in press coverage to the point of a boundary trips stack, gets manhandled by the receiver on the bubble screen, getting washed out of the play, and opening a lane for the slot receiver to fall forward for a key short yardage conversion.

Overall, Rodarius Williams enters the 2021 draft as an intriguing prospect in the second tier of this year’s cornerback crop, likely to provide value for teams as a mid round selection.  While Williams is extremely versatile with his potential scheme fits, a man coverage heavy scheme would certainly best maximize his value at the next level.  While I don’t believe Williams has the necessary skills to travel with X receivers as a boundary cornerback, he projects as a prospect who could develop into a strong number two cornerback at the NFL level, more than capable of handling field cornerback responsibilities.

While Williams could stand to improve his block shedding technique and functional strength at the NFL level, he is an extremely refined player in press coverage, and will likely be able to garner snaps early, entering the league as a 24 year old redshirt collegiate senior.  Although carrying a smaller frame, Williams’ game reminds me somewhat of former NFL cornerback Sean Smith, who was able to put together a productive NFL career through his press coverage acumen and length, both in man coverage, as well as shallow zone assignments.  If selected by Pittsburgh, Williams would have an opportunity to compete with Justin Layne and James Pierre for the opportunity to serve as an outside cornerback in Nickel sets, allowing Cam Sutton to kick inside in sub packages.

Regardless of where he lands, Williams enters the draft as an NFL ready prospect, who has a limited ceiling due to lack of elite athleticism and ball skills, but should be ready to contribute immediately.  Ultimately, Williams will be added to the long list of names that Colbert and company will have in play in the mid rounds of the draft if the position is not addressed on day one, with the plus of having the ability to contribute immediately.