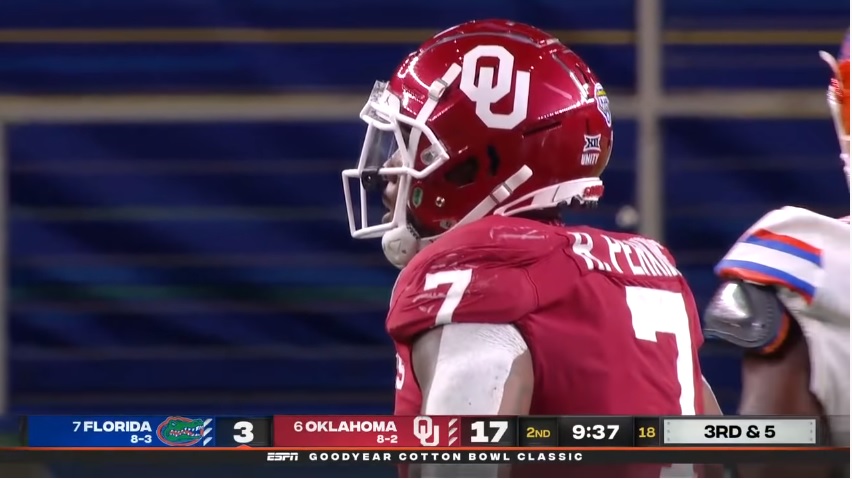 – Violent use of hands to disengage from blocks
– Plays with good leverage, shows quick initial first step off snap
– Relentless pursuit of plays, always around or near the football
– Excels using bull rush, speed to power moves to get after quarterback
– Played both as a standup end and hand in the ground end, not married to one side of the field
– Controls offensive lineman with powerful hand placement
– Splits double teams and shows ability to set the edge in the run game
– Good starting experience against quality competition

– Lacks ankle flexibility to bend corners on pass rushes
– Chooses inside moves in counters, causes him to lose contain off the edge
– Not the most explosive athlete, lacks alternative pass rush moves that doesn’t involve winning with his power
– Needs to add weight to his relatively small profile
– Suspension caused him to miss one game in 2019, multiple games in 2020

Ronnie Perkins is one of the most physical imposing defensive players in the 2021 class. He plays with a reckless abandon and violence from someone who may be a bit undersized playing the defensive end, or EDGE position, depending on your defensive format. He displays heavy hands, shows the ability to cause disruption in the pocket and plays with a relentless motor.

His 2020 Oklahoma State film is one of the best single game performances in this draft cycle. From the first snap he set the tone of physicality all game long. In this first play below, Perkins uses a long arm bull rush against potential first round pick Teven Jenkins and puts him on his back. Love that type of edge he plays with.

Second play is also from the Oklahoma State game. Perkins should solid initial burst, uses push, pull, dip and rip technique and gets a violent sack. He took down QB Spencer Sanders so hard it knocked him out for most of the game.

As mentioned above, Perkins plays with discipline in the run game. In both plays shown below, Perkins does a great job getting underneath the pulling guards and meeting the running back in the backfield. Sets the edge on both snaps and disrupts the run plays.

Another dominant game for Perkins was in 2019 against the Baylor Bears. He finished the game with four tackles for loss and three sacks. The play below shows his relentless motor and knack for getting to the quarterback. While he doesn’t win with his pass rush, he maintained his outside arm to ensure if the quarterback escaped the pocket, he would be there to contain.

However, Perkins’ inability to bend the corner and win with speed showed up on tape. Also against Baylor in 2019, Perkins tries to convert speed to power but loses his balance and isn’t able to counter. He needed to threaten the tackle upfield more, quicker, but Perkins simply does not win that way.

This time against Texas in 2019, those same issues show up. Right off the snap Perkins attempts to try an inside move, is stonewalled, and tries to bend back outside but just doesn’t have that extra juice to bend the corner.

Delayed stunts and exploding with his short area burst and quickness will allow him to be used all over an NFL team’s defensive line. Times up perfectly and is able to get a pressure against Florida and a sack against Iowa State. Explosive, violent plays from Perkins.

The talent and raw physicality is there with Oklahoma DE Ronnie Perkins. He won’t wow you with his athleticism like other EDGE rushers  in this class do, but he shows up and plays with an attitude and swagger that would fit in with the Steelers defense perfectly. Although there are red flags off the field, with him missing multiple games from suspension stemming from a failed drug test, Perkins has shown maturity and could be worth the investment on Day 2 of the draft.

If the Steelers are picking him, it would likely be used in a versatile gap scheme or stand up edge player. Not sure if Perkins could be a guy that plays in space, but he certainly could be another tool to use on an already solid defense.