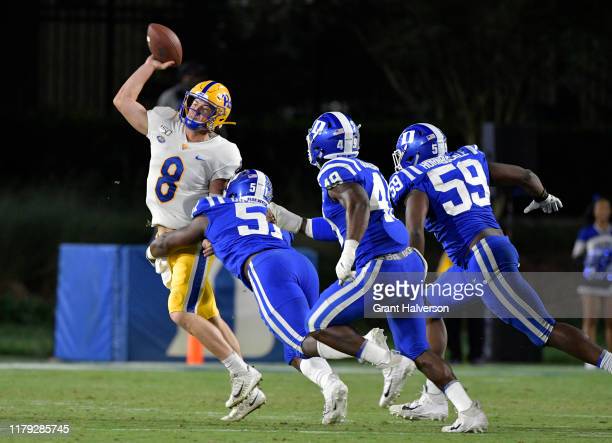 Victor Dimukeje is a four year starter with consistent production in his collegiate career.  He definitely looks the part with a rocked up physique on the edge of Duke defense.  He lined up from the 4i position out to the edge, aligned on both side of the formation and played from 2, 3 and 4 point stances.

As a pass rusher, he has solid quickness at the snap and uses quick, short steps when speed rushing up the arc. When he connects with his hands with chops he can get the lineman off balance enough to get him around the edge.  He shows a nice conversion of speed to power with good hand placement to push tackles into the pocket and he shows solid potential on his inside counters. He uses a stab rush with some effectiveness and will also use rip, spin and ghost and has solid bend when he can get to the edge. He had very limited reps in coverage, maybe three in the games watched.

At Virginia, from the right edge Dimukeje (51) has good placement on this stab and uses strength and leverage to push the left tackle into the pocket.

At North Carolina State, from the left side Dimukeje (5) will use a solid chop/rip combo to get under the right tackle and force the QB out of the pocket.

Vs Miami, from the right side he will use a speed to power rush and get a good push back to the quarterback.

Against the run he has solid mental processing verses Zone runs reading the tackle quickly and able to at minimum mirror the lateral movements to stretch the play toward the side line.  Versus power runs he has good strength and hand placement to set the edge and a solid lateral slide from the backside. He has good pad level and strength to reset the line of scrimmage in one on one blocks and can shed tight ends. He shows good pursuit to the ball to the outside and downfield and is a solid tackler overall.

At North Carolina State, on a third down play from the right edge he shows how he can reset the line of scrimmage pushing the tight end into the backfield to disrupt the run.

Vs North Carolina, he’s on the right edge and will shed the block of the tight end and make the play in the C gap.

Vs Miami, from the right edge he initially reads incorrectly but shows good effort to change direction and chase the ball to the outside.

When pass rushing his acceleration off the line of scrimmage is adequate and doesn’t put stress on the tackle. His use of hands is inconsistent overall and marginal when speed rushing. He has marginal awareness on cut blocks and tackles with good length will give him issues. When setting the edge due to his size he is forced to look around the outside of the tackle and allows a lot run to the inside. He moves inside when reading the tackle on running plays and it puts him under pulling blockers and leaves the outside open. His ability to shed blocks versus offensive lineman is marginal.

At North Carolina State, from the right edge he follows the tackle inside and ends up under the pulling blocker giving little chance to get to the ball.

Vs North Carolina, he will set the edge on the right and you can see how he has to peek around the outside to try to see the ball and can’t get off the block to the inside.

Overall, Dimukeje has good play strength, uses power rushes well, react to Zone blocking schemes well and is a solid tackler.  Areas to improve include his use of hands while pass rushing, ability to shed blocks and his mental processing of run blocking schemes.

Physically he is built for the NFL game but technically he is not.  When he uses his hands rushing the passer he can be effective but he just doesn’t use them all the time. There were long periods in games where he disappeared.  Not just statistically but not getting pressure, not flashing near plays or even finishing near the ball.  A team can stash him and try to coach him up and his best fit is probably as a reserve in a hybrid defense to play some strong side defensive end and as a pass rusher in a two point stance.