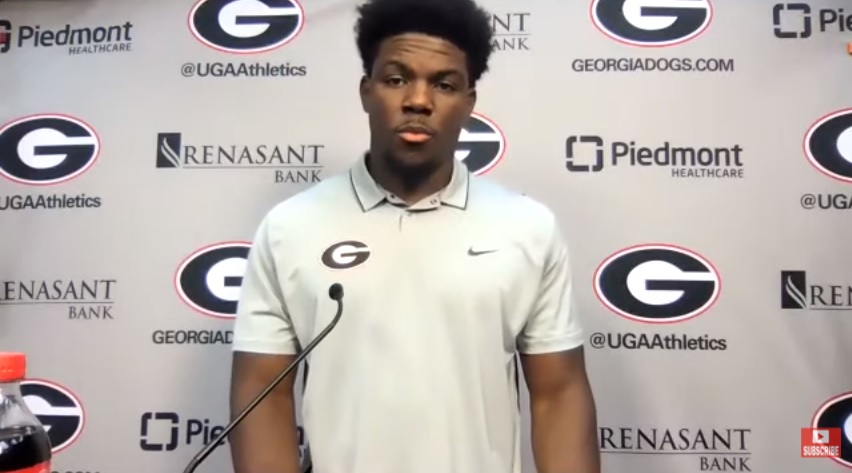 -Big mitts (11”) and the wingspan (79 2/8”) to match that you like to see for a receiver/blocker
-Lined up in-line, in the slot, and as an H-Back during his collegiate career
-Has good speed and explosiveness for the position
-Athleticism aids in his ability to create for himself after the catch
-Good mover in terms of change of direction and being able to make quick jabs and drop his hips to run good routes
-Natural hands catcher that sees the ball in through the process of the catch
-Has good body control as a receiver for his size
-Can adjust to the ball in the air and make catches away from his frame
-Good player to have in the red zone with his ability to separate from linebackers and win contested coverage catches
-Willing to stick his face in the fan as a blocker as a move tight end
-Plays to the whistle as a blocker and takes pride in his work
-Has the feet and athleticism to hook smaller defenders in the run game and can down block effectively on the edge to bounce runners to the outside
-Has the profile to become a regular special teams contributor

-Senior prospect from Wesley Chapel, Fla.
-Prepped at IMG Academy as a three-star recruit
-Originally committed to Florida State and played there for three seasons before ending his playing career at Georgia as a graduate transfer
-Only caught one pass for 23 yards in one game appearance as a true freshman
-Caught 26 passes for 256 yards and two TDs as a sophomore at FSU
-Started 10 of 12 games and caught 23 passes for 241 yards as a junior
-Played in seven games with the Bulldogs, ending his career with six catches on the season for 108 yards and one TD
-He had a knee scope just before the start of the 2020 season
-All-ACC Academic Team in 2018

Tre’ McKitty may not have made a huge impact on the stat sheets prior to the 2021 NFL Draft, but his athleticism, play demeanor, and upside make him a tantalizing tight end prospect. Originally committing to play football for the Seminoles, he contributed in Tallahassee for three seasons before graduate transferring to Athens to play with the Bulldogs. McKitty isn’t a giant in terms of size by any stretch, but he isn’t tiny either, having more than suitable height and size to play both on the line and detached. He is a great fit as a move TE that can line up as an H-Back but has the skillset and experience in the slot and in-line to play nearly in any scheme.

McKitty’s calling card is his athleticism. He has good burst off of the snap and can get moving in a hurry downfield. He uses this well as a receiver to stretch the defense and provide the offense a mismatch against linebackers who can’t run with him and defensive backs who can’t handle his size. Here is a great example back to his Florida State days where McKitty (#6 at FSU) lines up as the H-Back on the right side of the formation and runs the wheel up the sideline against the linebacker of Louisville. He is able to get on top of him and makes a difficult grab in coverage running into the end zone for the score. Notice how he extends for the ball but also is able to stay in bounds, winning the contested catch.

Not only can McKitty win vertically, but he also has shown some refinement as a route runner. On this play vs Samford, McKitty lines up in-line on the left side. On the snap, he is quick out of his stance, makes a quick jab step inside, then to the outside as he runs to the back of the end zone. The QB places the ball behind him, but he adjusts back to the ball to make the ball to make the grab with the defender coming in. This play shows McKitty’s ability to drop his hips, run quick routes at nearly 250lb, and adjust on the ball when thrown to make the catch.

McKitty’s athleticism makes him a moveable chess piece that can be deployed all over the formation. Here against NC State, he lines up in the slot and stretches the seam up the middle against zone coverage to make the catch away from his frame and run for more yardage.

McKitty is a great weapon to have near the LOS as well as downfield. Here he acts like he is staying in to block but leaks out on the TE screen and shows off his run-after-catch ability, making multiple defenders miss in space while reversing field to pick up the 1st down and then some on the big chunk play.

While McKitty may not destroy anyone as a devastating blocker in the run game, don’t confuse that for an unwillingness to get a body on a defender. McKitty loves to contribute in the ground game from all different alignments. On this play against Boise State, he lines up as the H-Back and leads up the hole for #3 Cam Akers, picking up the box safety and throwing his shoulder into his man, eliminating him from pursuit and springing Akers for a big TD run.

In the same game, McKitty lines up in-line and gets out on the WR screen to teammate #15 Tamorrion Terry, picking up the cornerback and drives his feet and gets his hands inside the defender’s chest, pushing him out of the play. Sure, McKitty can do a better job to square up on his blocks and play with better leverage, but for a “receiving TE”, this is the effort you want to see.

Another example of McKitty’s blocking while at Georgia against Missouri where he lines up in-line on the left side and comes down the line, washing the defender down into the pile, opening up the lane for the fullback to lead up the hole and for his tailback to covert on 3rd-and-short in the red zone.

Overall, McKitty may not be the prototypical TE prospect that we are accustomed to looking for but given how pass-heavy NFL offenses are becoming and how TEs are being asked to play all over the formation, McKitty can be that type of player. He has room to grow as a receiver, as he never has benefitted from having great talent at the QB position during his collegiate career, and he is an acceptable blocker at worst that can handle linebackers and defensive backs well. He needs to get stronger and work on his fits to match up with defensive ends, but this would mainly be gravy on top of what McKitty can provide in the receiving game. He honestly compares quite favorably to Jonnu Smith from a size, measurables, and utilization perspective. I’m not saying that he will be Jonnu, but his utilization and growth as an NFL player could have the same trajectory.

Pittsburgh could undoubtedly use another TE after the retirement of Vance McDonald. It would be assumed that the Steelers would look for a traditional blocking-type at TE, but McKitty offers a unique skill set that could really thrive in Matt’s Canada’s offense. He can wear a bunch of hats and be used in the screen game, over the middle, as a move blocker, and possibly even on handoffs and shovel passes. Eric Ebron is only signed through 2021, and should Pittsburgh be looking for a potential long-term replacement that could be hand in the middle rounds, McKitty could be their guy that can play as the backup or the 3rd string to start and cut his teeth on special teams and on passing downs before earning an expanded role as a fun piece to have in an open passing attack.