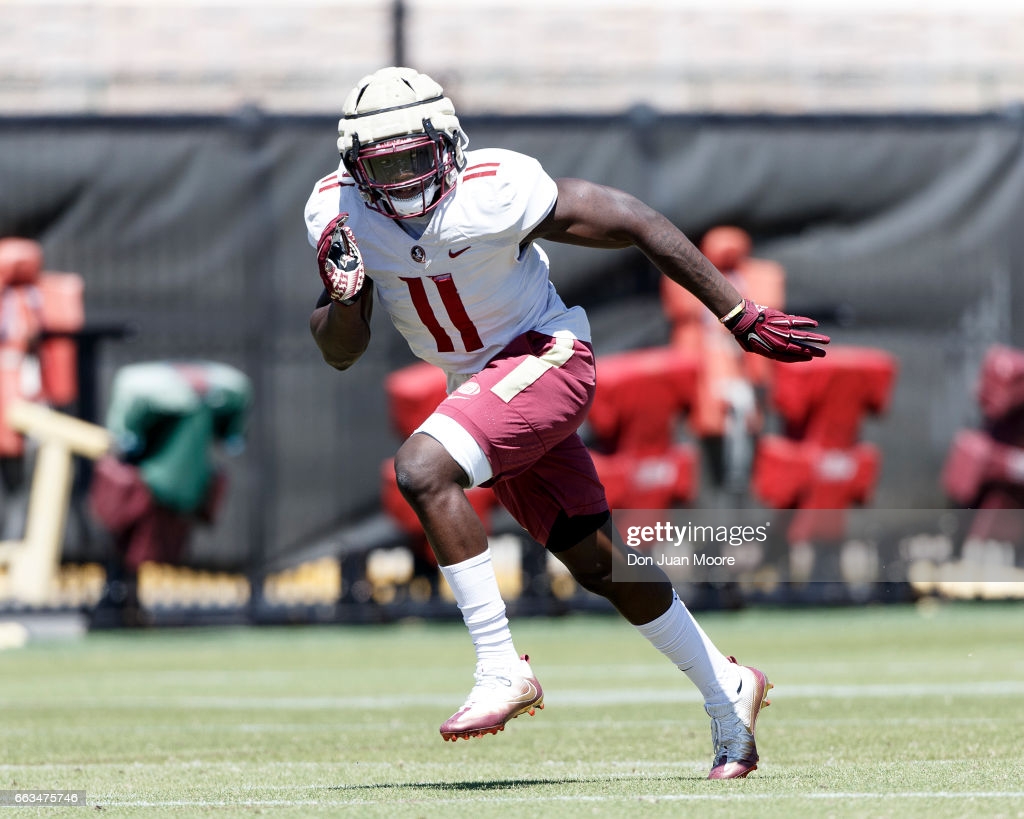 -Three-year starter with experience lining up anywhere from head up on the guard to the edge in both a standup position or with his hand in the dirt
-Has a little experience dropping into coverage and lining up detached as an outside backer
-Fantastic frame and arm length (35 2/8” arm, 86 2/8” wing) you want in an edge rusher
-Good athlete for the position in terms of speed (4.72 40) and explosiveness (34” vert)
-Plays with strength against the run with the heavy hands to stack and shed blockers
-Stout run defender that is disciplined in his assignment and keeping outside contain
-Plays with a fair amount of power both as a pass rusher and a run defender
-Crashes down hard when unblocked to blow up backside runs in the backfield
-Has enough bend for a bigger guy to get around the edge and around blocks
-Pursues the football with intensity and urgency as a run-and-chase defender
-Looks to deliver a big hit on the ball carrier when he closes in
-Long arms and make him a viable open to knock down passes and play on the field goal unit to block kicks
-Opportunistic at knocking the ball out with his long arms
-Physical tools and lack of development upon traits by coaching staff at FSU suggest higher ceiling available at the next level

-Has a thin lower-half that can cause leverage issues when he gets too high on his rush or gets stood up on blocks
-Needs to add strength to his lower body to anchor down on down blocks and avoid getting washed in the run game
-Will need to play with better hand placement and keep blockers from getting on his chest
-Can have balance issues around the edge to stay upright
-Unpolished as a pass rusher, lacking refinement in his hand usage
-Most of his production was effort sacks rather than technique sacks
-Tends to panic when initial rush fails, not using a counter and tries to mainly push the pocket instead of getting off the block
-Had below-average production given his athletic profile and years as a starter

Janarius Robinson from Florida State is one of those guys that teams will have go first off of the bus when arriving to the stadium. The man is rocked up with an impressive frame that scouts love to see for edge rushers, having the athleticism and play demeanor to match. Robinson is a good athlete for his size, displaying good strength and power as a stout run defender. One of my favorite moments displaying Robinson’s power in the run game was on this 4th-and-one situation against North Carolina where he lines up head up on the offensive lineman and on the snap, he explodes forward, uprooting the blocker and taking him to the ground, causing a big pile up and the conversion to be unsuccessful for the offense.

Robinson has heavy hands with the ability to stack and shed well against the run. Here in the same game he sheds the right tackle on the outside run and blows up the play in the backfield.

Another example of Robinson stacking and shedding against #73 Mekhi Beckon on the right side, getting into the backfield and making the stop.

Another impressive feat of strength Robinson has shown is his ability to sit in and take on pullers on the edge. Here against Clemson, Robinson comes off the edge with his shoulders square on the RPO, closing down space and takes on the pulling guard #74 John Simpson who was drafted last year and takes on the block successfully. He extends his left hand out, essentially throwing Simpson to the floor, and wraps up the runner for no gain on the play.

As a run-and-chase defender, Robinson is not one to be left unblocked by offenses that don’t want him to cause havoc in the backfield. He can close space fast with his long strides and shows great effort. Here against Clemson, Robinson comes off unblocked and closes space near the line as he reads the play, then crashes down hard and makes the play on the runner, knocking the ball out with his extremely long arms as he wraps up for the tackle.

Some have questioned Robinson’s effort at times when the team is getting blown out. However, I would argue that there is nothing wrong with Robinson’s effort as a player, but rather the culture and issues the Florida State program dealt with the coaching staff and the toxicity that showed up throughout the program. Throughout his film, Robinson has displayed a player with a motor that doesn’t give up on a play. A perfect example of this is this play against Duke where he manages to chase the runner nearly 40 yards to save the touchdown.

Robinson has shown versatility during his time with the Seminoles as well, having lined up both inside and outside with his hand in the dirt and in a two-point stance. He also has split out on occasion and dropped into the flats in coverage, holding his own on these assignments with his effort. This obviously isn’t his strong suit, but he has shown he can play the 3-4 outside linebacker role as well as the 4-3 defensive end. Here he splits out into the slot, fights off the block of the receiver, and makes a play on the quick screen.

Robinson’s length not only aids his ability to play the run and get off blocks, but also his ability to knock down passes and block kicks. He has blocked several kicks during his career with several coming against Georgia Tech which is highlighted below. He will be a clear special teams contributor in the pros with the same assignment to get his long arms up to bat down balls.

As a pass rusher, Robinson’s long arms and lengthy frame make him difficult to lock down for tackles on the edge. If he plays with good bend and balance, he can turn the arc and impact the pass with his length. Here against Boise State, Robinson gets the corner, showing a little bend and keeps his outside leg and arm free, getting a hand on the passer and knocking the ball out for the strip sack which a teammate takes to the house.

He will win a lot of his pass rush reps with effort and get effort sacks rather than high-quality technique sacks. However, his ability to adjust and get to the passer isn’t a terrible thing. Here he is initially blocked on the corner but spins back inside and chases down the passer for the sack.

While Robinson has some bend around the edge and can work the push/pull, dip/rip on his pass rush, he doesn’t really have a go-to move as a pass rusher. He could stand to add to his arsenal in order to refine his game and be more affective. Another issue is his balance which can be seen on the clip below. Sure, Robinson gets the sack, but he starts to stumble and fall on the ground as he turns the corner, relying on the pressure from his teammate to run the QB back to him. Robinson needs to add move lower body strength and work on his balance to stay upright on these situations in order to really be effective coming off the edge.

Another example where Robinson tries to win his run with the chop, but he allows the blocker into his chest and results in him losing the rep, merely pushing the pocket instead of him trying to disengage from the block.

As mentioned earlier, Robinson is strong and powerful when he has leverage, but when he stands up tall, his length and thin lower half fail him against strong blockers. Here he gets too upright against the run and gets overextended in the block, resulting in him falling down and not pursuing the ball.

Janarius Robinson is a fun evaluation of traits versus production. He has all the measurables you want to see from an edge rusher, but only notched eight sacks in four years with the Seminoles. I would put part of that on the program’s inability to adequately develop players over the past several years and the internal issues the program has dealt with during Robinson’s tenure there. There is no denying that Robinson needs development in terms of utilizing a pass rush move and having a counter to use should his initial rush fail. He also needs to add more functional strength and mass to his lower half to hold up against powerful blockers and help him play with better balance.

Overall, Robinson is a raw prospect, but there are a lot of great qualities you can work with. His bread and butter is as a strong run defender which is always needed as an edge rusher, and his length has shown to be a problem in many facets of the game. He has shown flashes as a pass rusher and plays with effort you love to see from a player on a bad team in college. Robinson honestly reminds me a lot of Romeo Okwara from the Lions who was undrafted, but also was a long, powerful edge rusher that needed some refinement before contributing in a big way and cashing in this offseason.

Kevin Colbert and Mike Tomlin were in attendance for the Florida State Pro Day, and chances are they had their eyes on Robinson given the depletion of their outside linebacker room. Robinson can come in and play that role as a standup linebacker, as well as a traditional defensive end in a 4-3 if they go sub package and provide depth as a rotational piece and a core special teamer. Should he continue to develop his skills and improve as a pass rusher, Robinson could prove to be quite the value pick given the upside he has and possibly push for quality playing time down the road.