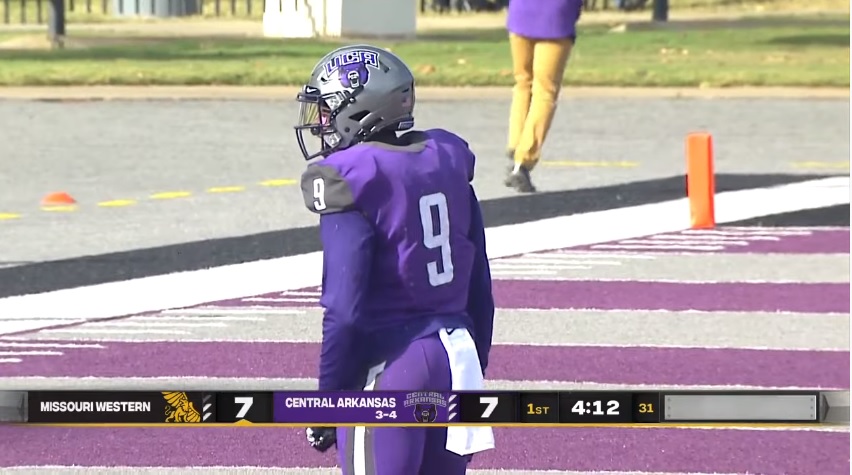 – A little on the lean side but solid frame overall and good length (32 3/8 inch arms)
– Overall, athletic-testing cover corner who shows good top end straight line speed
– Impact player overall, plus ballskills and knack for taking the football away
– Good hands and ability to catch the football
– Flashes impressive hit power and ability to separate player from ball
– Uses length well, competitive at catch point, and doesn’t give up on the play, able to recover and plays through pocket well with technique and strength
– Work at both CB spots, played mostly man but experience in zone
– Physical, effective two-handed jam but punch is inconsistent
– Good experience, still got to play a lot of football in 2020 despite smaller school

– Shows straight-line speed, tested well, but shows some stiffness in flipping his hips and bit of a build-up runner, can lose a step working in tight man coverage when receiver wins off the line
– Inconsistent player overall, not always aggressive enough as a tackler and playing the run, motor seems to run hot/cold
– Tends to get stuck on stalk blocks and needs to use his hands better to defeat blocks
– Punch in jam is inconsistent, needs to tighten up his hands
– Needs to be more disciplined with his eyes, gets caught staring in backfield
– Better in tight coverage than off-man
– Small school/competition concerns

Robert Rochell is not only one of the top small school sleepers in the secondary in this draft class but one of the top small schoolers overall. He’s got a couple key things going for him that a lot of guys in his shoes didn’t. One, Rochell absolutely crushed his Pro Day workout, held in front of 22 scouts who were absolutely all there to see him. Call it a low 4.4 40 time, 43.5 inch vertical, and a 11’1″ broad jump.

On tape, Rochell shows plus ball skills. He has good length and competitive at the catch point, showing off that vertical on this end zone breakup. Really a key moment in a comeback upset win over Western Kentucky.

He made a ton of impact plays in school. There were times I wanted to see him be more physical but this is a great play. Secures the receiver, rips the ball out, scoops it up, and scores. Love cornerbacks who are playmakers. Dudes who change the game. Quarterbacks don’t want to throw to that guy.

He’s capable of making an impact as a tackler rallying downhill. But he’s too inconsistent and hot/cold for my liking. In big moments, he steps up. In others, he doesn’t bring that same intensity. Two missed tackles shown here. Overall, I want to see him be more aggressive playing the run and tackling. Be involved in the play more often. Sometimes he’ll gear down and let others make the play.

I want to see some more consistency from his game, especially as a tackler and in run support. And I don’t think he’s quite the athlete the way he tested either. Little stiffer but he is a taller/leaner body type. Some things to clean up in press but he has the ball skills and playmaking ability worth trying to build around. My NFL comp to him is Jamar Taylor, former 2nd round pick of the Dolphins. Rochell is a worthy project at the end of Day 2.