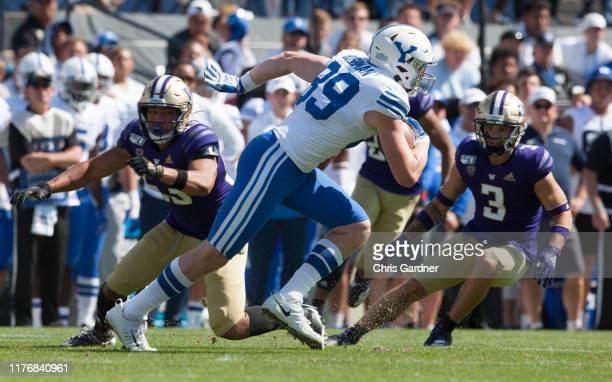 – Good size and frame, looks as big as listed, maybe even a bit heavier
– Combat catcher, routinely made tough catches in traffic and 1v1 against LBs/DBs
– Impressive hands, catches away from body, good body control and concentration
– Above average athlete, shows good fluidity and has straight-line speed
– Versatile, lined up all over the formation
– Moderate YAC threat, won’t run away from many but can break initial tackle and falls forward on contact, tough runner whose a pain to bring down
– Ran diverse route tree, wasn’t limited to a small number of routes, won at all levels
– Gives effort and shows some initial pop as a blocker in the run game
– Some experience in pass protection
– Plus production, healthy yards per catch
– Comes from athletic family

– Below average run blocker with weak, three-point stance, needs to put more weight on front hand
– Struggles to sustain blocks in run game
– Not an elite athlete who struggles to change directions on 90 degree routes (digs) much more than when he can round routes off (over routes/speed outs)
– Isn’t a natural separator who will often have to win contested with size/frame
– Missed entire 2020 season with torn Achilles suffered in early September
– Older than typical prospect, 25 years old

Can’t draft Pat Freiermuth? Go take Matt Bushman. You’re getting a very similar, albeit slightly older, prospect. Bushman would be talked about a lot more had it not been for the torn Achilles he suffered about a week before the start of the 2020 season. Had he been healthy and gotten to catch passes from Zach Wilson’s in his stellar season, his draft stock would’ve been much higher.

But when Bushman was healthy, he made big plays downfield. He has great hands and is a physical, combat catcher. BYU often lined him up as the backside “X” receiver and threw back shoulder fades his way. And more times than not, he won. Two great examples, especially the one-handed grab.

He’s an above average athlete too with some burst and straight-line speed. It’s not elite but much better than many others in his class. His size makes him a decent YAC threat. He’ll break a tackle, drag another defender, and fall forward.

As a blocker, he’s weak. Starting with his three-point stance. Not much weight on his down-hand here and it doesn’t let him fire off the ball. Fixable thing but will need to be addressed in the NFL.

And as a blocker, he struggles to hold and sustain his blocks. Falls off too easily. His size and effort helps but he’s a marginal blocker right now and must improve to be an every-down tight end in the NFL. He’s not such a playmaker in the pass game that he can get away with being the below average blocker he is right now.

The Achilles and age is a dubious combination too. Drafting a 25 year old coming off a nasty injury like a torn Achilles is a tough pill for NFL teams to swallow. On that alone, some teams will pass on drafting him. And that’s understandable.

My NFL comp for him, injury concerns and all, is Tyler Eifert. Not in terms of pre-draft hype, Eifert was a first round pick, but in terms of NFL career arc, that’s where I’m making the comparison. That is, if he can bounce back off the Achilles. True Wild Card there.