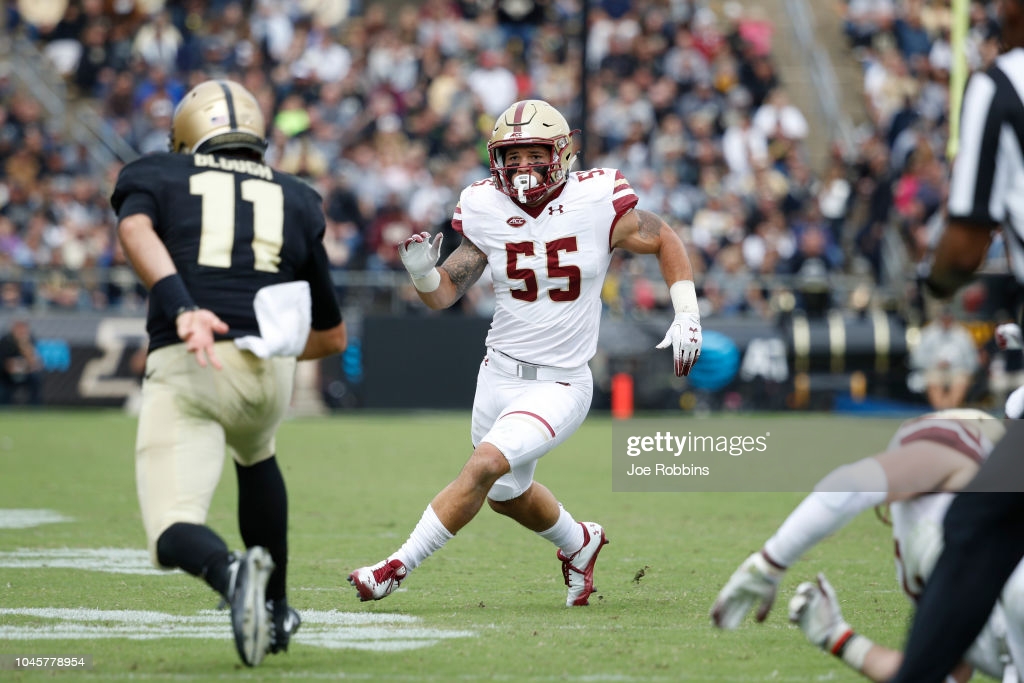 – Can be a bit overaggressive against the run and will take himself out of plays
– Falls victim to window dressing against the run; eyes can deceive him at times
– Slightly undersized for the position in terms of height and length
– Lacks production and disruption as a blitzer, lack of feel overall
– Feel in zone coverage is below average; needs things happening in front of him to process in zone coverage

– Played in 37 career games for Boston College over 3.5 seasons
– Recorded 233 total tackles, 15.5 tackles for loss, 8.5 sacks, four pass breakups, one interception and one fumble recovery
– Missed all but four games of 2019 season due to undisclosed injury
– Named to the All-ACC second-team in 2020
– Recorded career-high 16 tackles against Notre Dame in 2020
– Finished 2020 season with 107 tackles, good for seventh-best in the nation

Looking for a run and chase linebacker on Day 3 that is a tackling machine? Boston College inside linebacker Isaiah McDuffie is your man.

A three-year starter at Boston College, McDuffie racked up the tackles over the years, profiling as a rangy, sideline-to-sideline linebacker with some serious short-area explosiveness.

Strong against the run overall, McDuffie took a step forward in man coverage his last two years, showcasing the ability to stick with running backs and tight ends on short routes, providing the Eagles with a three-down linebacker.

Against the run, McDuffie is a lightning rod, firing downhill with power and speed to meet the running back in the hole.

Here against Texas State, he misdiagnoses the play initially, dropping into coverage, but he has the speed and burst to fire downhill in a hurry, slipping underneath the climbing lineman to blast the back in the hole.

McDuffie does an excellent job here reading his keys to click and close downhill against the run, using a powerful initial punch to stun the tight end and then make the play behind the line of scrimmage.

Check out the technique to wrestle the back to the ground, too. When he reaches the ball carrier he rarely misses, clamping on and using his strength to drag guys to the turf.

McDuffie reads runs quickly, closing towards the line of scrimmage and shuffling to his right. From there, he slips under a block and closes in on North Carolina star running back Javonte Williams.

Once he reaches Williams, who is a power back in his own right, McDuffie showcases the strength to rip him to the ground for the run stop.

McDuffie thrives in short-yardage situations where he is able to read and react and fire downhill with speed and power.

Here against Notre Dame in 2020, McDuffie does a great job sliding into the hole to his left, staying clean off the block from the tight end and making the run stop in the hole.

Check out this closing speed here by McDuffie against Pittsburgh in 2020. He’s a tick late to recognize the jet sweep, but watch the burst and angle that McDuffie takes to get to the receiver on the boundary for the run stop.

Few linebackers in this class have that type of click and close moving downhill.

One last clip for you here. This is McDuffie’s lone interception of his career, coming in Week 1 against Duke.

McDuffie does a great job of reading the quarterback’s eyes here, working slowly back to his left to get into the throwing lane on the crossing route, picking off the pass.

After watching almost all of McDuffie’s 2020 tape, I see a linebacker that can handle a three-down role in the NFL, though he’s still super raw in zone coverage and won’t spot drop well enough to be a strength in the passing game.

That said, I love this guy against the run. He’s a true run-and-hit guy that has the power to stay clean with his initial punch, and simply will not miss tackles.