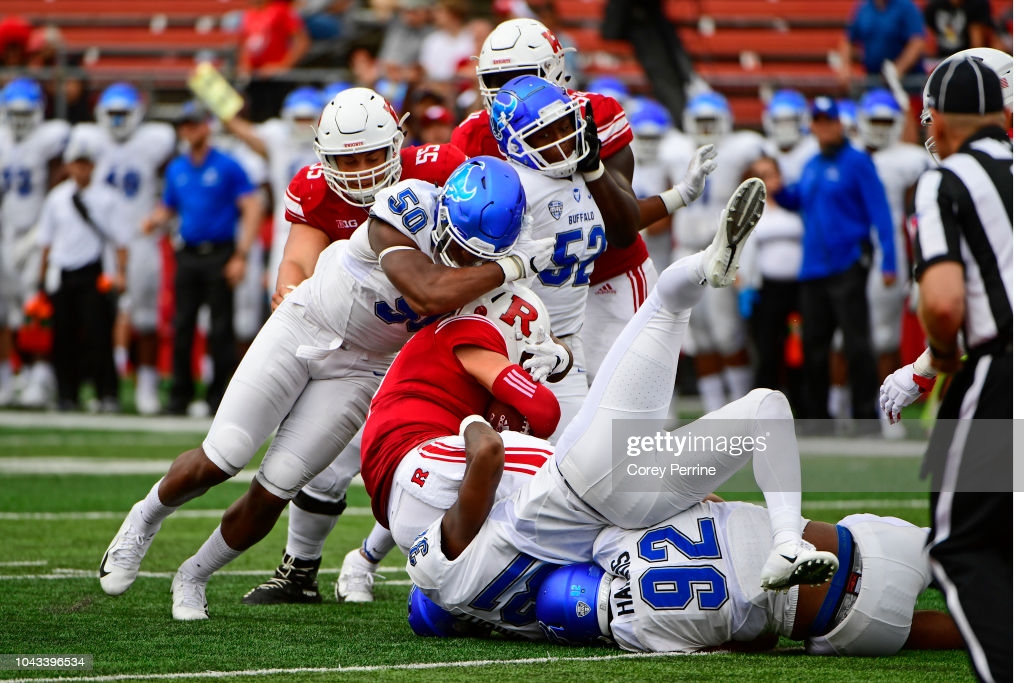 – Good frame and plus length, little bit on the lean side
– Above average athlete, quick first step
– Best trait is bend, great hip/ankle flexibility, able to flatten and turn the corner with ease
– Plus hand use, able to chop hands down and turn the corner, shows effective, go-to pass rush
– Uses length well in run game, holds point of attack when he plays with proper leverage and pad level
– Didn’t drop into coverage a lot but fluid with loose hips moving backward, looked natural in zone coverage
– Able to disengage and slip blocks in run game
– Good hit power and finish, impactful tackler
– Experience playing left and right side, spent lots of time playing on his feet

– Needs to get stronger overall
– Will get washed in the run game when he plays too high
– Power/bull rushes aren’t much of a threat, NFL tackles will sit on speed
– Should develop more inside counters, flashes inside spin but needs to add another move to toolbelt to make speed rush more effective
– Didn’t see to have a lot of experience dropping into coverage, even less in man coverage
– Only moderate production despite lower level of competition
– Played just one career game against Power 5 school

In a sub-par pass rush class, a talented EDGE rusher like Malcolm Koonce should be getting talked about more. The numbers might not show it, and that is one concern, but he’s an athletic edge rusher with some of the best bend and flexibility in this class.

That’s the #1 reason why you’re drafting him. For Koonce’s ability to bend and flatten at the top of of rush. Even when tackles sit on speed, he’s still able to win and make his way to the QB when most pass rushers would be sealed upfield. He combines that with good hand use, a go-to chop to knock the tackles hands down as he’s bending. Couple of examples.

I wish Koonce would’ve worked out at his Pro Day but he didn’t due to a foot injury. His three-cone time would’ve been great, I bet.

Koonce also shows the ability to finish. He’s a good athlete who runs hard to the ball and packs a punch on contact. In the 2019 bowl game against Charlotte, for which Koonce was named MVP (playing against Alex Highsmith), Koonce had this big hit and forced fumble at the end of the half.

Overall, he shows good hand use in the pass and run game. The biggest problem with him is play strength. He has long arms and he can hold up against the run but he needs to win with leverage. He won’t get by on pure strength. Great compare/contrast of it. In this clip, he’s the lower man and he holds the point of attack. In the second, he doesn’t have leverage and he gets washed.

Compared with the bad.

And if you notice, these plays occurred back-to-back. So a really strong contrast.

I want him to be able to threaten with bull rush. His speed/dip & rip is potent but it’ll be even better if he can also threaten tackles with speed or a better inside move/counter. The concern is he might be a little maxed out at 6’2, 250. Hopefully he can add more muscle in an NFL weight room. An article I read about him admitted he didn’t have a good understanding of weight room training until he got to college.

The other concern is just general middling production. 17 career sacks, only more than five in a season (though he had five in six games last season). But generally you want a MAC guy to have some overwhelming numbers to feel confident about the jump in competition.

Koonce is an interesting “toolsy” guy with upside if he gets stronger and a little more refined. But the bend alone is worth taking a long look at and a worthy Day Three flier. On the high end, he could be the next Bruce Irvin. But that’s a lofty goal. More realistically, I see some Eli Harold in his game. But there’s always the chance he flames out the way former Steelers’ draft pick Chris Carter did years ago.