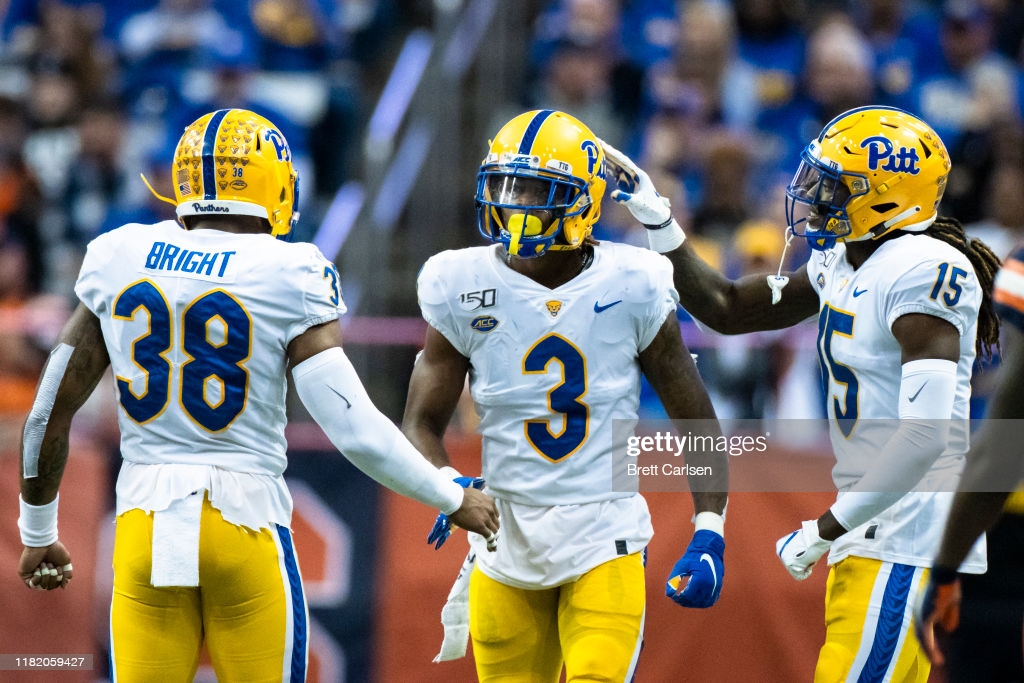 -Small, slight frame for the position
-Functional strength is below average; will need to add mass at next level
-Needs to finish off plays on the ball on a more consistent basis, considering how often he’s around the ball
-Lacks overall top-end speed and could struggle to recover on routes at the next level
-Appears indecisive in coverage and is slow to trust his instincts

In a relatively light safety class in the 2021 NFL Draft, Pittsburgh’s Damar Hamlin provides quite a bit of experience and production at half the value that some of the top safety names have at the moment.

As a five-year starter at Pittsburgh under head coach Pat Narduzzi, Hamlin was an integral defensive leader for the Panthers.

Though he has a slight frame overall for the position and isn’t as athletic as other safeties available in the draft, Hamlin brings the necessary mentality to the position, finishing consistently downhill against the run and the pass.

Hamlin is a smart player overall and reads his keys well, allowing him to fire downhill quickly to get in on plays.

Against North Carolina State in 2020, Hamlin showed off his range and physicality to roll downhill and make a play.

He reads the bubble screen quickly and clicks to close downhill, stays square to the ball carrier and drops his shoulder to wrap and make a play near the line of scrimmage.

Hamlin flashed the same ability later in the season on the road against Miami (Fl.).

Prior to the snap, you can see Hamlin rolling downhill to be on the move to slip the tight end’s block on the bubble screen. This goes back to film study for Hamlin, who knows what’s coming based on the formation and the motion.

While I do have some concerns about Hamlin’s abilities in coverage due to his tendency to sit on his heels and react late, I love Hamlin’s motor and mentality.

Here against Miami (Fl.) Hamlin is clearly beat, but he never gives up on the route and throws his hands late to get his right hand into the catch point, breaking up the potential explosive play for the Hurricanes.

Here in man coverage against Clemson late in the 2020 season, Hamlin flashed the ability to recover quickly and jump the route.

I’d love to see him finish plays like this, which could have resulted in a pick-6.

When he does finish plays on the ball though, it looks like the above.

He does a fantastic job passing off the Louisville receiver and sitting into his zone, reading the quarterback’s eyes, which takes him to the spot to cut off the ball for the pick.

In zone, he has a great feel for what’s around him and reads the QB’s eyes well, allowing him to be in position to make plays.

Overall, I think Hamlin has the necessary range to play some single high, and I think he can provide some snaps in man coverage against tight ends and slot receivers. I love the way he plays against the run and fires downhill on plays in front of him.

He feels like a solid depth safety that can play in nickel and dime, and can thrive as a special teams demon. Though the testing numbers aren’t quite there, Hamlin is more than worthy of a mid-Day 3 selection.