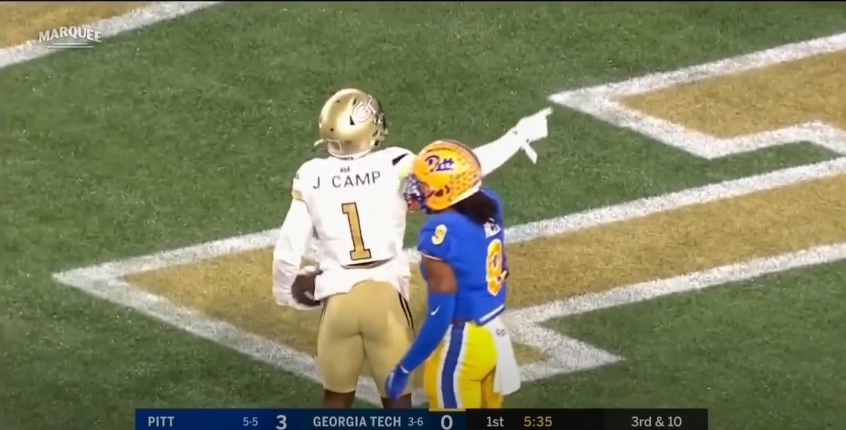 Another interesting wide receiver prospect is Georgia Tech’s Jalen Camp.  Camp put up eye-popping numbers on his 3/16/21 Pro Day.  Camp could be a possible later-round selection for the Pittsburgh Steelers in order to add receiver depth, should JuJu Smith-Schuster or James Washington leave in free agency following the 2021 season.  However, Camp shouldn’t be viewed as just depth in my opinion.  In his 2020 season he was moved around the formation, and his freakish athletic numbers paired with some of the flashes of potential in terms of technique that he put on tape (specifically in 2020), makes him an intriguing developmental upside-pick.

This first clip gives a taste of why I think Jalen Camp will be a very interesting late round pick in the upcoming 2021 NFL Draft.  In the first game of his 2020 season vs. FSU, Jalen Camp (boundary side) displays burst, strength, and his catch radius.  With a quick jab to the outside, he’s able to sell an outside release to beat the press coverage of the DB back inside.  Now with separation, Camp fights through the DB’s hands and gets his eyes on the QB.  He tracks the pass then spins mid-air to snatch the ball helmet level.  A great rep from Camp here.

This clip is from the same 2020 game against FSU.  Jalen Camp (boundary side) is working against press coverage again.  At the snap, he gets his feet moving quickly before bursting inside and navigating through traffic on the drag route.  He displays some solid acceleration across the field as he catches the short pass in stride and stiff-arms his defender on his way to a first down.

This clip from Georgia Tech’s 2020 matchup with UCF is one of my favorites from Camp’s film.  Here, the big-bodied receiver runs a whip route from the slot boundary side.  He drops his weight and pivots after forcing his defender to overcommit to the inside.  If Camp can continue to develop as a route runner to the point where he can consistently run slot routes, it will be a matchup quandary to find the type of defender with the necessary athleticism and strength to guard him around the formation.

In this clip from the Yellow Jackets’ 2020 game vs. Pitt, Camp runs a double move from the slot.  These types of reps encapsulate Camp’s potential as a route runner.  While still raw overall, with refinement he could become a consistent threat, especially when operating as a field stretcher.

In this clip specifically, Camp does a good job of selling the double move by getting his eyes to the quarterback after the slight cut inside.  He then quickly swivels his body to continue vertically and tracks the flight path of the ball to secure the catch with a defender trailing.

This clip from Georgia Tech’s 2019 game against The Citadel shows Camp utilizing his speed, size, and strength to his advantage.  He’s lined up out wide boundary side, and while he doesn’t receive a target here, we can get an idea of how he can and should be used at the NFL level.  On this play, Camp takes advantage of the defender’s inside leverage in order to build momentum up the sideline, while easily knocking away the defender’s attempts at contact with his hands.  Before he runs off screen, we can see that Camp stacks the defender and is in good position to continue upfield vertically.

When Camp is able to build up momentum with his long speed, his combination of size and strength allows him to keep positioning and pull away from or outmuscle his defender.

This clip from the same 2019 game vs. The Citadel shows another go route from Camp (out wide field side).  He beats the DB vertically then tracks the ball well to the front of the end zone.  He lets the DB (who wasn’t able to get his head around in time because he was trying to catch up) run past him, then slows himself so that he can hop to secure the catch for a score.

This is the last clip from the 2019 game vs. The Citadel.  Camp exhibits solid hands to make the catch with defenders closing in on him.  With a free release and no one in his vicinity, he streaks up the seam then hangs onto the football despite being wrapped up from behind by a defender.

This clip from his 2020 game against Clemson displays Camp attempting to block play side for the running back.  While Camp is a willing, strong blocker who can be used to anchor play side runs, there were reps on tape that showed he should work towards achieving consistency.  This clip is one example.  He’s unable to get square to the defender and does not drive forwards to engage with his hands (with multiple defenders in front of him, it looks like he didn’t know who to block) which causes him to miss.  However, this is a minor issue that I believe he will be able to quickly correct with NFL coaching.  Camp does have some really great reps blocking on film.

In this clip from Georgia Tech’s 2020 matchup with Notre Dame, we can see Camp’s (out wide) raw route running.  Here, he doesn’t do a great job of dropping his weight or getting his arms moving in order to put on the breaks and really cut suddenly.  He looks a bit stiff and it definitely impacts his agility.  The good news is that as a potential later-round selection in the 2021 NFL Draft, he should have plenty of time to work on refining his route running/technique in order to become a more complete wide receiver.

Jalen Camp has the build and the testing numbers of an NFL-caliber receiver.  He didn’t post a noteworthy statistical season until 2020 (even his 2020 stats are modest), but injuries and Georgia Tech’s run-heavy attack have to be taken into account when looking at his stats.  If any team can develop Camp into a polished, full time contributor, it’s the Pittsburgh Steelers.  I won’t mind if the Steelers take a chance on him as a late-round flier in the upcoming 2021 NFL Draft (however, Danny Smith was the only Steelers’ personnel member spotted at his 3/16/21 Pro Day).  The flashes Camp has put on tape are worth gambling on if he is available late.