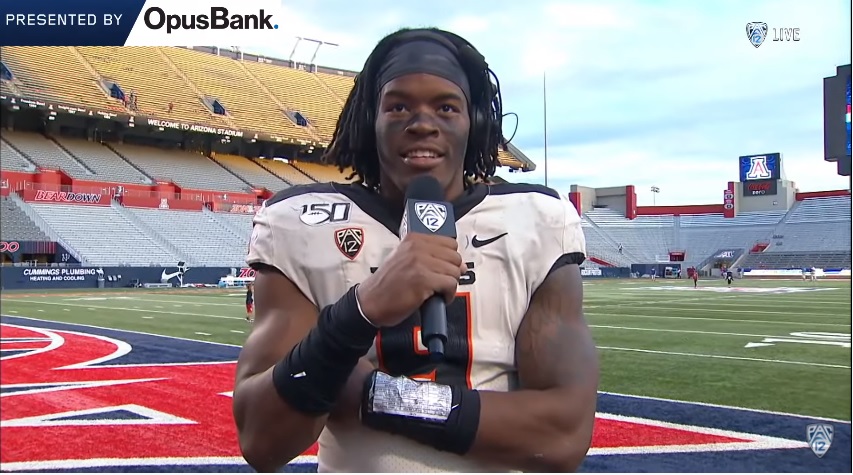 -Good athlete that has the ability to play on his feet or with his hand in the dirt
-Can be moved all over the defensive front, playing either side of line on the edge
-Can be split out into the slot on occasion and will drop into the flats or the middle of the field for zone coverage duties
-Great arm length (33 3/4”) that he uses to hands up in passing lanes to deflect passes
-Plays with a lot of effort and a hot motor as a run-and-chase player on the backside of run plays and when rushing the QB
-Has a variety of pass rush moves (two-hand swipe, swim, drip/rip, chop/rip) to beat blockers and get to the QB
-Can win as a pass rusher on extended plays, showing the ability to adjust back to the ball when initial move fails
-Opportunistic pass rusher that will go for the strip sack and rip at the ball when he arrives to the ball carrier
-Does a pretty good job of keeping his outside leg and arm free on the edge against the run
-Will win with a quick inside move against slower tackles and can displace TEs hoping to seal him off in the run game
-Does a great job getting his hands up in passing lanes to knock down passes
-Athletic profile gives good sense to contribute on special teams coverage units at the next level

-Redshirt Senior prospect from Phoenix, AZ
-Played outside linebacker, defensive end, wide receiver and tight end in high school
-Once had 10 sacks in a single game as a junior as a prep athlete
-Did not play in a game, using his redshirt season in 2016
-Appeared in 12 games as a redshirt freshman, recording six tackles, including five solo
-Played in all 12 games, making 10 starts his sophomore campaign and tallied 58 tackles (30 solo) with 11.5 for loss, 2.5 sacks, three pass deflections and a forced fumble
-Played in all 12 games, making 11 starts as a junior making 62 tackles (43 solo) and led the nation with an Oregon State single-season record 22.5 tackles for loss, also racking up 14 sacks, two pass breakups, two forced fumbles and a fumble recovery
-Played in and started all seven games as a senior in a pandemic-shortened season, finishing with 23 tackles (15 solo), two tackles for loss and one forced fumble
-2019 All-Pac-12 First Team, 2019 Second-Team All-American

Hamilcar Rashed Jr. of Oregon St ate seems to have gotten loss in the shuffle during the pre-draft process. Sure, his statistical breakout campaign in 2019 was followed up in 2020 by a pretty disappointing performance, but to be fair, he lost nearly half of his games due to the PAC-12 starting up football late because of the pandemic. His lack of a sack in his final season for the Beavers can be a cause for a concern, but one has to go back to his 2019 tape to truly understand what he is capable of as a pass rusher. Rashed has a great feel for rushing off of the edge as college defender. Despite only having one year of high-level production, he has a natural feel for using his hands, showing multiple pass rush moves to defeat blocks and get to the passer. Here on this rep from the Senior Bowl, Rashed wins against Northern Iowa tackle Spencer Brown with the two-hand swipe on the inside, swimming over his inside shoulder and finishing in the QB’s face.

Hits the chop/rip combo when the tackle tris to reach forward on his quickset, knocking down the tackle’s outside hand and ripping his inside arm through while staying low around the corner. He then accelerates forward and finishes in the QB’s lap.

Rashed can win with pure speed off of the edge as well as a pass rusher. Here against Arizona State, Rashed anticipates the snap perfectly, getting to the RT’s shoulder before he is even out of his stance, ripping through with his inside hand and getting to the QB and drags him to the turf for the sack that breaks OSU’s all-time single-season record.

Rashed does come off unblocked on this play against Cal Poly (outside of the RB chip on his way out of the backfield into the flat), but he showcases his pursuit from the blindside as the QB rolls out to the right and hunts him down for the sack. Rashed also shows an awareness to go for the splash play when the tackle is secured, raising his right arm and going for the famous strip sack that the defense recovers deep in their own territory.

Rashed is a natural fit for a 3-4 outside linebacker in today’s league. He has enough size to be effective as a standup pass rusher on the outside, but also the athleticism to drop into the flats and run in pursuit. Here against Stanford, Rashed reads the screen coming on the outside and starts to cheat there before the snap, On the snap of the ball, he breaks to the receiver on the screen, taking him down at the line of scrimmage for no gain.

Against the run, Rashed shows some good qualities when manning the edge. He can stand to add more mass and functional strength to his lower-half to anchor better against power blockers at the next level, but Rashed wins with quickness against tackles and is a true mismatch against TEs. Here on this play, Rashed gets off the ball quickly and gets the quick swim move over former UCLA TE #86 Devin Asiasi, catching #27 Joshua Kelley in the backfield for the loss on the play.

Hamilcar Rashed Jr. also does a great job affecting passing lanes with his hands when he can’t get home on his pass rush. He is instinctive and reads the QB’s eyes, looking to get his hands up to try and deflect balls at the line. Here he comes off unblocked against Cal but stays square to the LOS and reads the play. He then jumps and gets his hands up in the passing lane as the QB releases the ball on the RPO, knocking it up in the air and into the hands in the defensive back for the interception.

While Rashed is a good edge rusher on the outside, there are several things he needs to work on to have a better impact as a pro. He has some bend to his game, but there are signs of ankle tightness at times when trying to bend the arc around the edge to the passer. His hand placement can improve as well to avoid giving his chest to the blocker and not have his rush moves fail, causing him to fail on his rush. Here Rashed does get the sack, but you see him fail to bend the arc around the tackle at the top of his rush, ultimately overrunning the QB. Luckily, the passer runs right back into him when rolling out to the left, giving the sack on the stat sheet.

Rashed also needs to continue to add strength to his legs and work on finishing through ball carriers inside of allowing them to drag him for extra yardage. Here is a good play vs Washington this season where Rashed gets a favorable matchup against the TE on the outside run but allows the blocker into his chest and is slow to disengage. Because of this, Rashed tries to leave his feet on the tackle of the runner on the jet sweep, ultimately having the rusher run right through his hands for 1st down yardage. Should have Rashed shed his block in a timely manner and run his feet through the ball carrier, he undoubtedly would prevent the 1st down pickup.

Overall, there is a lot to like about Hamilcar Rashed Jr. as a natural fit at a standup 3-4 outside linebacker at the next level. He needs to continue to add strength to his lower body and improve his overall hand usage to win more consistently on the outside, but has all the traits you like to see in a developmental EDGE prospect that can come in as a third option behind two starters and play as a designated pass rusher on a handful of plays to spell the starter while contributing on special teams as he works to earn a full-time role as a starting edge rusher. His measurables, play style, and career trajectory are eerily similar to Samson Ebukam who also was a solid 3-4 outside linebacker most recently for the Rams, now the 49ers, who took some time to develop into a consistent starter opposite Leonard Floyd in Los Angeles.

Pittsburgh is in need of another pass rusher and given what they did selecting Alex Highsmith last year to severe as the #3 edge rusher in the rotation before becoming a starter this year, Rashed could fill that role in 2021. He would be able to spell either Highsmith or Watt for several plays a game while he continues to work on his body and become a more consistent edge defender and a cheap, young 3rd option in the rotation with the upside to play a lot of snaps in the future.