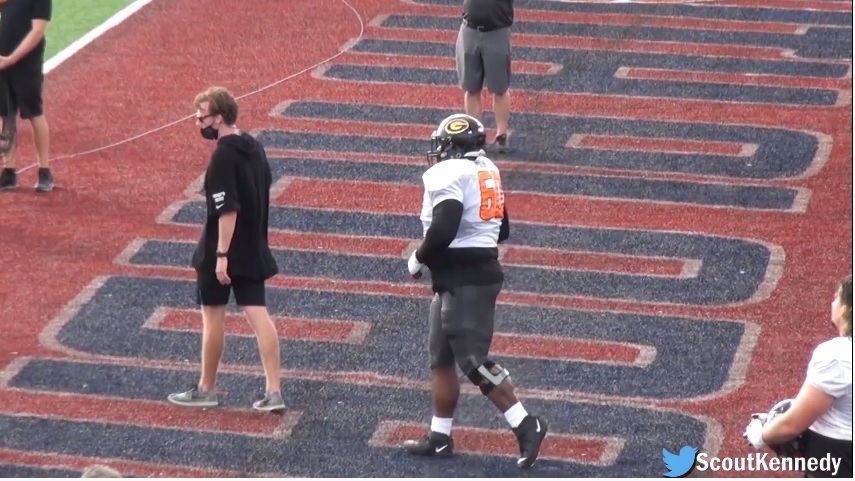 David Moore bypassed his senior season when it was moved to the spring. That did not prevent him from getting an invite to the Senior Bowl where he was able to make a good impression. He actually showed up 30 pounds heavier than his listed playing weight in 2019 and looked like a different player physically. While playing primarily left guard for Grambling State he also saw time in the Senior Bowl at right guard and center.

As a pass blocker, he showed good quickness at the snap and played with a wide stance and good balance.  He has a powerful punch and good hand strength to lock on and sustain blocks. He has good lateral agility to counter inside moves and displays good mental processing on twist and stunts. His anchor is strong when he has good hand placement and can halt the push in the pocket. He has solid mobility to be used on screens and when uncovered he looks for work to get a slab of ribs on a defender.

At Louisiana-Monroe, Moore (60) looks comfortable passing off his defender and picking up the looper on the stunt

At Louisiana-Monroe, he gets out in front of the screen and just a nice job of squaring up the defender and finishing the block.

At Louisiana Tech, he wins with his hands inside to control the pass rusher and then shows off his strength tossing him to the ground.

Vs Alcorn State, this isn’t the best rep but I love his awareness here.  I’m not sure if he is tripped or pushed down but look at the awareness to dive to the inside while on the ground to attempt to block the rusher.

As a run blocker, he displays good quickness at the snap, a demeanor to finish blocks and has strong hands to sustain.  He has solid lateral quickness on runs to the outside and good play strength to get a push on defenders on the move. He uses good pad level and aggressiveness to get a push on down blocks and will stalemate in base blocks with the ability to turn and wall off blockers. He gets solid push on double team blocks and has solid timing climbing to the second level.  Once there, he breaks down quickly and good hand placement to control and drive linebackers out of the play. He plays with his eyes up and has good awareness to find the most dangerous defender. He has good footwork and agility to be used on fold or pull blocks and good aim at his target.

Vs Louisiana Tech, he shows his strength on the second level shoving the linebacker twice.

At Jackson State, he has good agility to position himself on the outside of the 3T and wall him off to the inside.

Vs Alcorn State, here is an example of him pulling to his right and kicking out the end man on the line of scrimmage to help open up a hole for a big run.

Will lunge forward with his punch and can have quick defenders swim around him.  He needs to improve on removing the hands of lengthy defenders especially on power rushes. He needs to be more consistent with his punch timing. When uncovered, his focus can be to only one side instead of keeping his head on a swivel.  He will stop his feet in pass pro. He doesn’t get a lot of push on one on one blocks on the first level. The team had a lot of issues with pre snap penalties and saw him flinch on several plays that it didn’t get called.

At Jackson State, the defender has the quicker hands on this rep and gets into his shoulders and is able to drive him back to the QB.

Vs Alcorn State, he’s the left guard and is too early with his hands causing him to overreach and give up the pressure.

Overall, Moore has good agility, play strength and powerful hands.  He sets up quickly, has the lateral agility to handle counters, has the strength to anchor and mental processing to handle stunts and twists.  He is a solid overall run blocker with the ability to pull and get a push on down blocks.  He has good mobility and is good on the second level.

Despite his off season weight gain he was able to impress at the Senior Bowl and he is already down 20 pounds since then. There will be growing pains with the jump in level of opponent but he has all the tools to become a very good guard.  The possibility of him being able to play center as well is a big bonus. His best fit would be in a gap/power running scheme and he would be a quality backup in year one and with development a chance to start in year two. The Steelers have David DeCastro in the last year of his contract and a need for depth on the interior but it may not be the biggest need to take Moore though he would be a good fit.

Games Watched:  2019 – At Louisiana- Monroe, At Louisiana Tech, At Jackson St, vs Alcorn State, Vs Southern