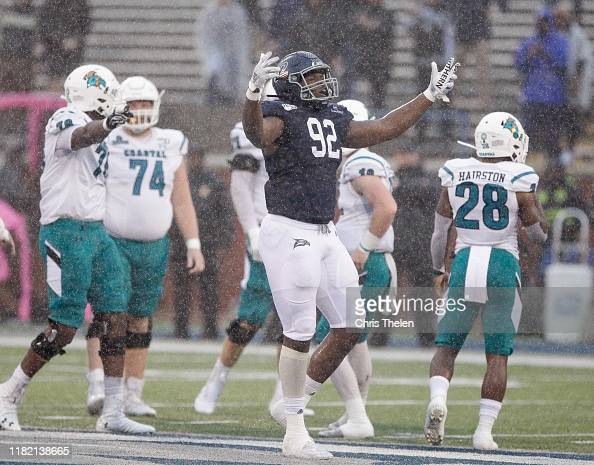 – Powerful athlete who showcases violent, active hands
– Plays with above average leverage, gets hands inside body of tackles, guards
– Relentless pursuit of plays, always around or near the football
– Disruptive in run game, squeezes down blocks into hole of RB
– Possesses NFL frame for modern defensive end position
– Uses swim moves, bull rushes, and speed to power moves to generate pressure

Raymond Johnson III’s name has not been mentioned much during this 2021 NFL Draft cycle but he carved out a solid career for the Georgia Southern Eagles. An experienced player who has taken snaps in 50 career games, Johnson showcases the ability to play with his hands, and play with power. He’s one of the few defensive ends who is draftable and has the size to play in the NFL right away, with no needed weight adjustments.

Right off the bat, Johnson shows explosiveness off the snap against Army in 2020, turns the corner and gets home for a huge sack. Displays short area quickness to get off the ball with urgency at the snap.

Johnson III makes a living feasting on down blocks, and showing the ability to squeeze and close off the edge. In both plays against Minnesota in 2019, Johnson has great leverage, using his hands to push the down block into the hole, or to disengage and make a play in the backfield. He excels in clogging up run lanes.

While Johnson does not possess quick twitch ability, or ankle flexion to bend the corner, he still understands how to get to the quarterback. He attacks the outside leverage of the tackle during his matchup with Coastal Carolina in 2020, dips and rips, and records a quarterback hit, nearly sacking him.

On an outside run play, Johnson does a nice job disengaging and making the play at the line of scrimmage. He keeps his shoulder square, reads the play and reacts accordingly.

There were more than a few plays that Johnson III absolutely blew past his man but could not finish the sack, and this play against Florida Atlantic is a great example. Johnson uses a swim move to get past his man, but isn’t able to redirect and sack the quarterback. Goes back to the lack of ankle flexion, but impressive move to force the quarterback out of the pocket.

What Johnson struggled with during his career is finding ways to win against tackles who have a size/arm length advantage. While he was disruptive against Minnesota, recording six tackles and two sacks, there were times he got mauled. In the play below, Johnson loses leverage, gets too high and loses balances, resulting in getting pancaked. He has to play with better strength and base against longer armed opponents.

The effort he plays with shows up all over his tape as well. Watch how Johnson forces the quarterback to pitch the ball, and chases down the play to make the tackle. He put up solid pro day numbers, and while he’s not a freakish athlete with elite speed, Johnson makes plays all over the football field.

In college, Johnson III mainly played as the defensive end on a 3-4 defense, what the Pittsburgh Steelers run currently on defense. How violently he plays and the weight he plays at could make him a really solid fit for the Steelers as a rotational piece on their defensive line, to continue building depth. Although he played in the Sun Belt, Johnson looks NFL ready, and could be a late round value pick for the Steelers.

Games Watched: vs. Florida Atlantic, at Coastal Carolina, at Minnesota (2019), at Army