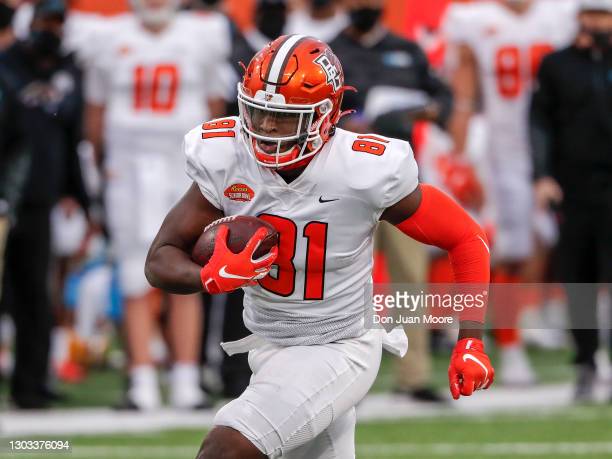 – Great speed and fluidity for his frame
– Burst at the top of his route, good change of direction and able to separate in coverage and make defenders miss after the catch
– Good hands and plucks the ball away from his frame, adjusts to poorly thrown passes outside his frame
– Ran a well-rounded route tree
– Matchup problem on the outside for CBs
– Not overly powerful and doesn’t break a ton of tackles but fights hard for extra yards, good awareness to know where the sticks are at
– Productive career despite playing in terrible offense with awful QB play the past two seasons
– Shows effort as a blocker

– Doesn’t have a lot of experience as an in-line, Y tight end
– Struggles as a run blocker, lacks strength and leverage and has trouble sustaining blocks
– May be taking a false step when attached to the formation, dropping outside foot before getting upfield
– Inconsistent versus press coverage, needs to do better job with hands and releases
– Does he have a true defined position and role, may lack top end playmaking to be defined as position-less athlete for an offense

This isn’t a weak tight end class but depth falls off quickly past the top three: Florida’s Kyle Pitts, Penn State’s Pat Freiermuth, and Miami (FL)’s Brevin Jordan. That makes Bowling Green’s Quintin Morris an interesting sleeper and honestly, a poor man’s version of Pitts. His position is a bit undefined and there were times where he was used more of a receiver than tight end but he’s a super interesting player.

Morris is a good athlete, as evident by his Pro Day workout. 40 time in the low 4.4’s with a decent vert and broad for his size and body type.

Solid group of pass catching TE on Day 3 this year and Bowling Green’s Quintin Morris helped himself with a pair of good 40 times at pro-day.

And it translates on tape. If anything, his athleticism pops more once he puts the pads on. He’s a very easy, fluid mover who creates space at the top of his route. Nice adjustment to reach back for the ball, too.

Morris is a strong open-field runner who can make defenders miss after the catch. Sometimes you get straight-line speed with these build-up tight ends but very few of them have the hips and agility too. He has both.

His best routes are slants when split out wide, combining the quickness to cross the DBs face and the size to box him out.

He also is capable of making tough catches thrown outside his frame. Digs this one out of the ground and picks up the first down.

Which he had to do a lot. His quarterback play was atrocious the past two years. You might scoff at Morris failing to catch a touchdown in five games last season but his QBs threw a ground total of one touchdown pass. The offense was a mess and Morris was often its only bright spot. He made plays in one of college football’s ugliest passing offense. Get this man an NFL quarterback, even an average one, and he’ll look even better.

The issue with him is blocking. It’s Eric Ebron-level. There’s some effort and want to but he lacks the strength to hold the point of attack and had a hard time sustaining those blocks. Watch him here against Notre Dame. Loses the block almost immediately, the back has to bounce the run, and it goes nowhere. He’s going against #42, Julian Okwara, drafted in the third round last year.

Watching his tape, I really liked Morris. There’s some question about his fit. He came in at just over 6’2 but his length is solid so I think he can play at tight end. His biggest issue is finding a team and OC willing to move him around and play position-less football. When you’re drafting a Top 10 guy like Kyle Pitts, you’re doing so with the intent of building around him that way. With a Day Three guy like Morris? You’re probably less committed. But he has talent and he was hindered by playing in a bad offense the last two seasons. My NFL comp for him, on the high end, is Gerald Everett.

The Steelers were at his Pro Day and if they fail to address a tight end on Day 1/2, Morris is a name to consider on Day Three. Even though he won’t solve the run blocking woes, he could replace Eric Ebron’s role in 2022.