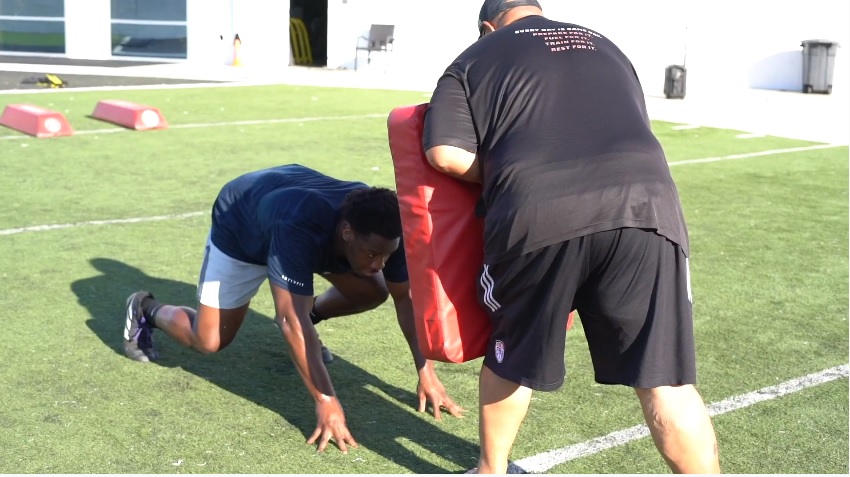 Levi Onwuzurike is another impressive defender from Washington in this year’s draft joining defensive back Elijah Molden and edge Joe Tryon. Like Tryon he opted out of the 2020 season.  He played along the inside of the defensive alignment from over the center out to the tackle.

As a pass rusher, he has very good snap quickness firing out low and fast and attacks the blocker with a good, heavy punch. He rushes with good aggressiveness and has solid placement and power in his hands shown in chops and clubs.  He has a solid pass rush plan mixing up his rushes including swims, clubs, spins, rips, bull rushes and snatches. He’s a handful for single blockers and has good acceleration to the quarterback. He didn’t power rush often but it showed promise to push the pocket. He displayed good awareness on screen and good foot speed to get outside and make tackles.

Vs USC, Onwuzurike (95) will start out over the center and use good hand placement to lift the outside arm of the left guard to get him off balance and power to push him into the backfield.

Vs Oregon, it’s a swing screen and he reads it quickly, aborting his rush and showing off his speed to the outside to make the tackle.

Vs Oregon he is going to set up the right guard, slow playing it to the outside, before using a spin to the inside to get pressure.

Vs Utah, here is an example of his bull rush with good hand placement and leg drive to push the right guard deep into the pocket.

Against the run he has scheme versatility capable of playing in 1 or 2 gap schemes.  When playing in a one gap scheme he has good snap quickness and bend to duck under or get skinny between blockers to get in the backfield and good change of direction in the backfield to get to the ball. When playing 2 gap he uses good hand strength, base and leverage to control and shed blockers. Good lateral agility and mental processing to read and flow with blocks to the outside. He has the play strength and leg drive to reset the line of scrimmage and is very disruptive in goal line situations. He made several plays in the games watched with his back to the end zone.

Vs USC, he is going to fire out into the left guard and twist him to the left while clogging the would-be running lane.

At Stanford, he displays a good punch and strong hands to shed the right guard and then work through traffic to make the tackle.

Vs Oregon, he’s over the center very quickly fires through the gap into the backfield and slows the runner.

Vs Utah, from over the center he will fire low into the A gap to bend under the blocker and make the tackle for a loss.

He leads with his shoulder often to try and split blockers and in doing so it takes he hands out of the play. When rushing he gets stuck after his first move with his hands and needs to work on counters. He gets off balance when rushing and getting off of blocks leading to stumbles.  When stamina is low he pops up out of the snap and loses any power. Versus double teams his technique needs work as he often gets turned and driven out of the play. Could improve his timing when shedding blockers.  He gets twisted taking on blocks getting him off balance. He had no ball production in his three years. Zero passes defensed, zero forced fumbles and zero fumble recoveries.

Vs Utah, he will face a double team block from left guard and tackle and he doesn’t stay square, turning his back and getting pushed downfield.

Overall, Onwuzurike has very good snap quickness, good use of hands and a variety of pass rushes to pressure the quarterback.  He has scheme versatility to play in a 1 or 2 gap scheme, good agility to flow with blocks and the strength to stack and shed as well. Areas to improve include countering when his initial pass rush move is ineffective, keeping his pad level low, improving technique versus double team blocks and make an effort to improve going after the ball.

The PAC12 only played a handful of games this year but it would have been nice to see his further development. He has a good foundation to build from with pass rush potential and his scheme versatility is a plus. He will help any team as an interior defensive lineman playing the 0 tech out to the 3 tech and should be a starter by year two at the latest.