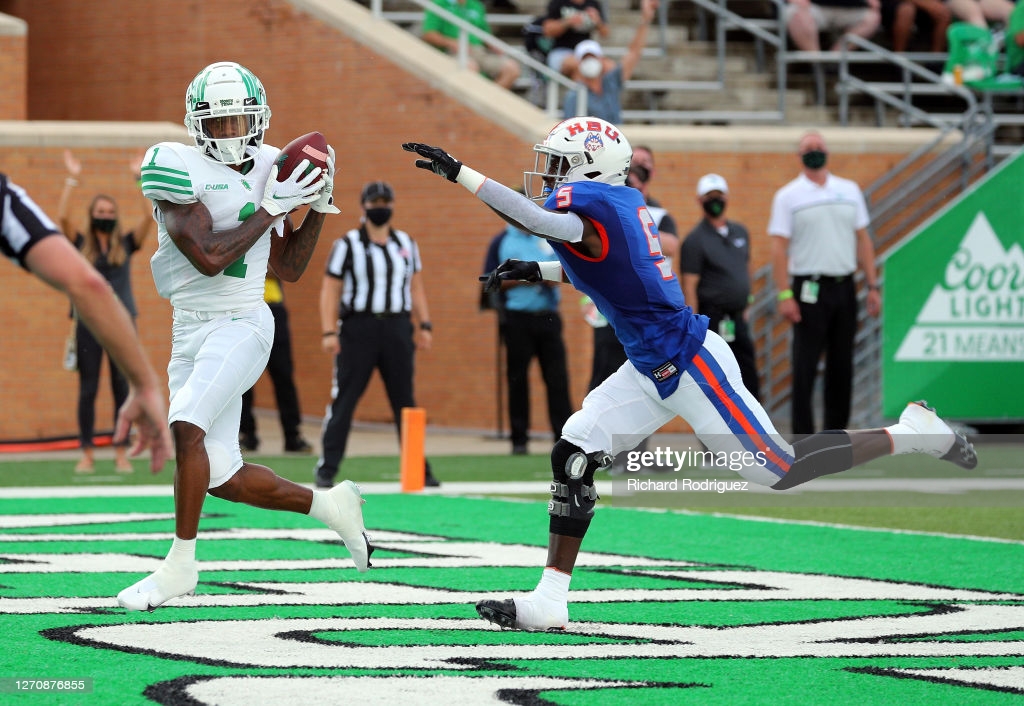 With the news of JuJu Smith-Schuster returning to the Pittsburgh Steelers on a one-year deal, the likelihood of the Steelers addressing the wide receiver position early in the 2021 NFL Draft has decreased.  However, Smith-Schuster is set to be a free agent again after the 2021 season, as well as James Washington.  This means the Steelers could still look to add to the position later on in the draft.  With such a deep WR group this year, value can be found even in the later rounds.  My last report was on Cade Johnson, a mid to later-round receiver who could end up being an upside selection for the NFL franchise that drafts him.  Another name to get to know is Jaelon Darden, an explosive, big-play threat from North Texas.  Darden is another high-upside, modern-day slot receiver who I think would fit into Matt Canada’s offensive scheme.

Let’s get right into the good.  This first clip from the Mean Greens’ 2020 game against Texas at San Antonio displays Jaelon Darden’s speed.  He (slot field side) finds some open space in the defense on an out-breaking route, then he’s able to beat the only remaining defender up the sideline to jet into the end zone.  Darden ran a 4.46 40-yard dash at his recent 3/25/21 pro day.

This next clip is from North Texas’ 2020 matchup with Texas at El Paso.  It displays Darden’s big-play RAC ability as he (boundary side) takes a slant to the crib from North Texas’ own 25-yard line.  This is far too much space to give a playmaker like Darden.  He will make you pay.

This clip is also from North Texas’ 2020 game against Texas at El Paso.  It is my favorite clip from Darden’s film.  It again depicts his game-breaking RAC ability.  Darden (boundary side) maneuvers by the defender in his path then makes the catch with soft hands, while gaining momentum in stride.  No defenders are able to catch him as he gifts his team six points.

This clip is from North Texas’ 2020 game vs. Southern Mississippi.  Jaelon Darden (slot field side) utilizes a patient, slow-tempo hop release (I discussed this type of release in my report on Kadarius Toney) to observe the coverage of his defender.  With his defender backpedaling, Darden is able to abruptly sink his hips and swivel his head/body inside for the uncontested pass.  He does a great job of varying his tempo to give his defender no chance to react.  He didn’t need to leave his feet to make the catch, but that’s being nitpicky.

In this clip from North Texas’ 2020 matchup with Charlotte (that Darden dominated in with 13 catches for 244 yards), we can see Darden win vertically.  Pressed at the line, Darden (out wide boundary side) gets his hands moving rapidly as if to indicate a foot fire release, before bursting up the sideline.  With the defender still somewhat in stride, Darden gives a slight push-off that isn’t a penalty… if it’s not called.  He then dives to haul in the catch.

This clip is from the same 2020 game vs. Charlotte.  Darden (out wide boundary side) wins vertically yet again, this time for a touchdown.  Darden’s elite ability to accelerate is on full display here.  He gives a quick shimmy to the inside before shooting up the sideline.  The defender doesn’t get hands on, so it’s a foot race.  Darden instantly gains separation, then looks the pass all the way into the bucket.  Too easy for him.

This is the last clip from the 2020 game against Charlotte.  Here, there’s some good and some bad in my opinion.  Darden (slot field side) doesn’t look like he has a plan of attack with his route, and his defender gets a hand on him, which appears to stall him and momentarily knock him off balance (more on this in the next clip).  However, the defender then takes his eyes off Darden and that’s all Darden needs to snap upfield and accelerate into open space.  Darden is great at attacking a defender’s blind spots.

This clip from North Texas’ 2020 game vs. Southern Mississippi illustrates my main concern regarding Darden’s leap to the NFL level.  In the games I watched, there were times where physicality would stop his momentum or move him out of his desired path.  While he wasn’t pressed much in those games, I do wonder how he will match up against more physical press corners in the NFL.  I think he will have to develop his release packages against press and continue to refine his route running in order to be a consistent threat as a full-time receiver.

In this clip specifically, Darden (last receiver in the bunch set) faces contact that knocks him off of his desired path.  The quarterback is staring down his side of the field, but nothing is open.

Darden’s size also limits his ability as a blocker.  In this clip from his 2020 game against Texas at San Antonio, Darden (boundary side) is trying to stalk block but misses his assignment completely, which allows his defender to dart right past him.  The only silver lining is that he did alter the defender’s path slightly, which was enough to ensure that he wouldn’t be able to take a good angle on the ball carrier.  Darden is not going to offer much as a blocker play side.  While he showed some effort and competitiveness in the games I watched, he’s much more suited to be blocked for as the ball carrier.

I think Jaelon Darden is another mid to later-round gamble that could provide an immense return on investment for the NFL franchise that selects him.  With Darden’s style of play, fans and scouts will likely make some comparisons to Tyreek Hill.  Every scout is always trying to find the next Tyreek Hill, and while I did see some Tyreek Hill-esque traits, so to speak, in Darden’s game (acceleration, agility, and game-breaking ability – Darden has a long way to go to become as complete of a receiver as Tyreek Hill), I think finding the next Tyreek Hill is an impossible task due to his unicorn-like athletic gifts plus insane polish at the wide receiver position (considering everything he’s able to do at his size).  In my opinion, Darden is more comparable to Scotty Miller (a more twitched-up version) in terms of size and weight, as well as the similarity seen in their ability to work all areas of the field, with field-stretching being one of their main shared strong suits.

It remains to be seen how Darden will fare with the jump to the NFL level, where he will face tougher adversaries.  He will have to adjust and accustom himself to the competition, as well as his role, but he should be able to further improve as a technician with NFL coaching.