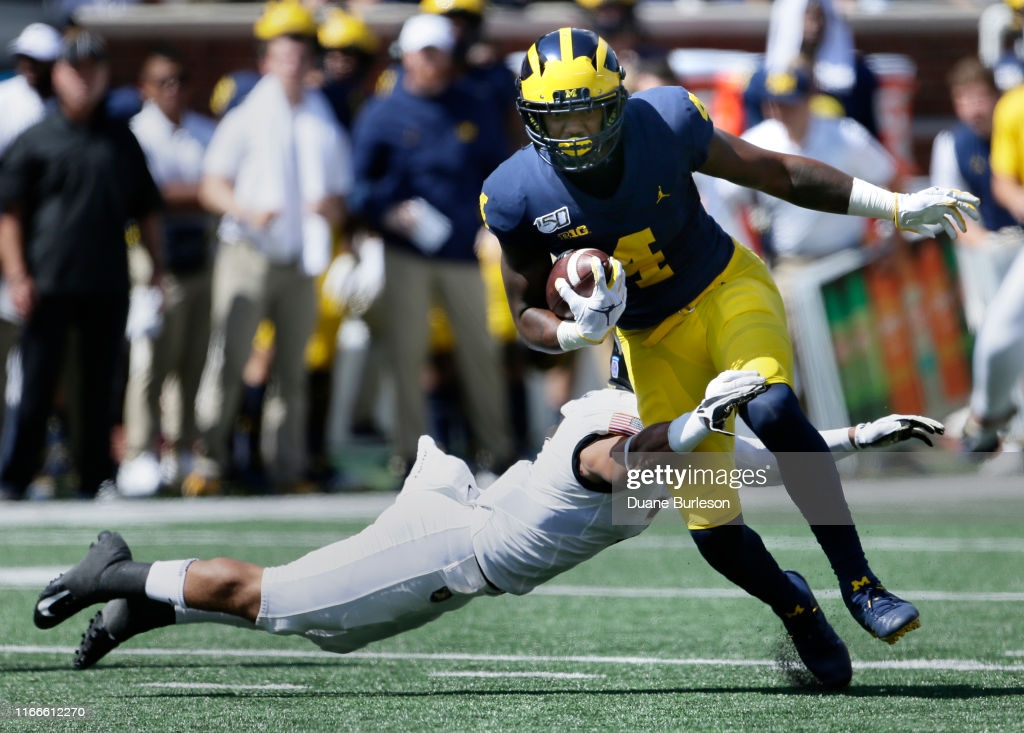 -Has pretty good burst off of the line and has that rolling speed with high, long strides as he gets going vertically downfield
-Good vertical speed (4.42 40) with excellent ball skills to be a downfield threat in the passing game
-Great size and play strength for the position, being able to body up smaller defensive backs
-Fantastic arm length (34 1/4”) and hand size to win jump ball situations
-Fairly good at getting releases on the inside and outside against press man and in off man coverage
-Can get on the corner’s toes quickly eating into their cushion in coverage
-Can stack defensive backs when running vertically, getting on top of them to haul in the long ball
-Wins plenty jump balls in combative catch situations against corners in single coverage
-Has good leaping ability (37.5” vert) and the body size to shield off defensive backs to make tough catches in the red zone
-Has strong, reliable hands on combative catch situations
-Shows his hands late when he attacks the catch point to not tip off the defensive back
-Does a great job getting inside leverage on the defender when breaking working inside
-Great on the back shoulder catch along the sideline and in the end zone
-Willing and capable blocker that will get a body on a defensive back and drive them backward
-Has the traits and athleticism to be a viable coverage man on special teams
-Has room for more untapped potential at the next level due to lack of usage/poor QB play at Michigan

-Acceleration after the catch is only average, being mainly a one-speed player
-Routes can be rounded when working intermediate
-Needs to improve hand usage when going against longer, physical press corners to get off the jam
-Isn’t the fastest player out of his breaks
-Can struggle to generate ample separation on most cases, resulting in a lot of contested catches rather than open receptions
-Benefitted from rub routes and defenders losing him in coverage on plenty of his big plays

-Senior prospect from Birmingham, Alabama
-Consensus four-star recruit coming out of Alabama
– Played in four games with one start as a true freshman and made three catches for 27 yards
-Appeared in all 13 games with 11 starts as a sophomore, recording 38 receptions for 632 yards and six touchdowns
-Appeared in 12 games with 10 starts his junior year, catching 37 passes for 729 yards seven touchdowns
-Had a Big Ten-leading 19.7 yards per catch in 2019
-Opted out of the 2020 college football season due to the pandemic and to prepare for the 2021 NFL Draft

Nico Collins is the next in-line of talented WR prospects to come out of the University of Michigan that seemed to not live up to the promise they showed as a recruit. However, this shouldn’t be seen as a knock on Collins, as the Wolverines have had a running carrousel of erratic QB play over the last several years and a suspect coaching staff that hasn’t seemed to get the best out of these high recruits from a development standpoint. This only goes to say that evaluating Collins was a challenge based on his traits and limited sample size, but after a deep dive, I came to the conclusion that his best game has yet to come and he has the skills to develop into a quality pro receiver.

When you watch Nico Collins, you see a receiver teams love to deploy on the outside. He is your classic height/weight/speed specimen that has great size, length and physicality to win contested catch situations but also the burst and play speed to win vertically downfield. Take for example this play against Iowa where #2 Shae Patterson throws up the jump ball in the middle of the field, trusting Collins will come down and get it. He gets good position on #12 D.J. Johnson for the Hawkeyes and goes up and gets it with the defender all over him. I personally spent six months with the Hawkeye Football program in 2019 and grew to know D.J. as a good athlete, but Collins size and physicality at the catch point proves too much for him.

Collins tape is full of these types of plays. For example, against Ohio State and their defensive backs, Collins hauls in two separate TD catches in single coverage where he utilizes his leaping ability, body control, and strong hands to come down with the ball in contested coverage. In both cases, you see him adjust to the ball in the air and make the back-shoulder fade catch in the back of the end zone while going to the ground.

At 6’4, 215lb, Collins is a physical specimen that not only is great at bringing in the tough grabs above the rim, but all shows some run after the catch. He is a strong runner that will put his head down and try to power through tacklers. Here against Florida, he makes the back-shoulder catch by the sideline against #21 Trey Dean and then continues to run for extra yardage carrying Dean on his back after securing the football. I also have spent time in the Florida Football program in the summer of 2018 and got to know Dean well as one of the most athletic defenders the team had, and Collins again takes advantage and showcases his playmaking ability.

Collins is the receiver you want to have in the red zone. His size and leaping ability allow him to climb the ladder and be a great target to have as a passer near the end zone. He also does a great job playing with his body in shielding off defenders on his back like a power forward in basketball to make the catch. He against Michigan State, Collins lines up on the right side and gets and inside release on the corner. You would like to see a crisper break inside, but he does get enough inside leverage on the defender, keeping him on his back and gives the QB a great target for the score in the back of the end zone.

Collins does a great job getting off of the LOS and eats into the defender’s cushion quickly. Collins will attack his toes and does a great job stacking corners on his vertical routes when working vertically. Here on this play, Collins runs right past #27 Julian Love on the go route, stacking him successfully and making the grab while going to the ground on the ball thrown a little too far inside. He had the easy touchdown catch, but his QB placed the ball in the wrong spot, but Collins still comes down with the play.

Collins isn’t the greatest at creating ample separation with his routes, as he can tend to round his breaks every so often due to his size, but he does show enough of a route acumen to get separation right before the ball arrives on the catch. An underrated part of his games is his releases both inside and outside of coverage. Here in Senior Bowl practices, Collins gets a good inside release on the corner and comes back to the outside, getting a step on the defender on the way back to the sideline and makes the nice grab in-bounds dragging both feet to establish possession.

Here’s another great route where Collins gets a good inside release on Tre Brown from Oklahoma, taking a quick jab step outside off the line as he breaks inside. He gets downfield and jostles for position on the jump ball in with the defensive back and eventually comes down with the ball in the end zone, attacking the ball in the air at its high point over the smaller defensive back.

Collins isn’t the best intermediate route runner and can definitely expand his usage over the middle. He does show good usage to the sideline and in short crossers, however, and has the run-after-catch ability to make a big play. Here Collins catches the short out route against Rutgers, then turns it upfield and shows off his speed as he runs down the sideline, just angling past one defender in pursuit for the long score.

Another underrated part of Collins’s game is his blocking. Being a bigger receiver, Collins will embrace his role as a physical presence on the outside in the run game, picking up smaller defenders on the perimeter and driving them backwards as he locks onto their torso and runs his legs. A good example is this rep against Ohio State where Collins gets on the corner right after the snap, washing him down from the boundary to set up the outside run. The back ends up getting caught by the linebacker, but Collins did more than enough to win his matchup here.

Overall, Collins tape showed a lot of positive attributes that are translatable to today’s game in the NFL. Sure, he may not be the most refined technician as a route runner at this juncture, but he has showcased great ability to great releases against press-man and off-man coverage as well as stacks defensive backs extremely well. As far as pro comparisons go, Allen Robinson is a similar sized receiver with a similar athletic profile that has good run-after-catch ability for a larger receiver and does great in combative catch situations. Robinson probably is a better route runner at this point, but Collins is arguably faster as a vertical threat and wins with his body control by shielding off defenders the same way Robinson does. Robinson also was passed on a little in the 2014 NFL Draft, and has far surpassed many of the receivers drafted ahead of him.

I expect that to be the case for Collins as well. I wasn’t on him early in the process due to the lack of production, but the tape and understanding actually how much the offense and poor QB play limited him changed my viewpoint on him. Collins may fall a little due to this and the fact he didn’t play last season, but he is as talented as any receiver at the top of the draft, and if brought into a good situation where he can develop into a more well-rounded receiver in a vertical offense, he could prove to be a tremendous value. The Steelers are said to have been in contact with Collins and also had Colbert and Tomlin in attendance for his Pro Day, so the interest is there. The team is known to develop good receivers in the middle rounds, and Collins could be in their sights as the next guy up as a great James Washington replacement and a weapon that can stretch the field while providing value on special teams. Pittsburgh may hope to target Collins on Day Three of the draft, but his talent and testing make me personally think they may have to secure Collins on Day Two to ensure he would line up in the Black and Gold in 2021.