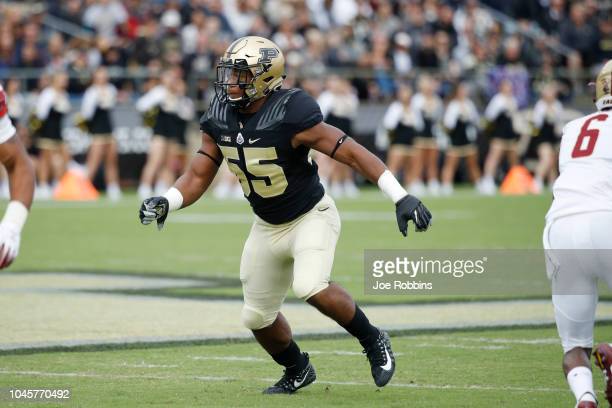 -Good athlete for the position with the speed (4.57 40) and the explosiveness (37” vert) that pops on tape
-Has good burst off of the snap and possesses the closing speed you like to see from a backer in pursuit
-Versatile defender that played as a stack linebacker role and an EDGE rusher role in college
-Has long arms and a great wingspan that aids his ability as a pass rusher and when attempting to defend passes
-Great at coming downhill and filling the gap in run defense
-Has the power and frame to take on blockers and stack and shed in pursuit of the football
-Converts strength to power well when coming off of the edge as a pass rusher, being able to push blockers back that have a substantial weight advantage on him
-A clear mismatch for TEs looking to block him on the edge with his strength
-Does a good job playing with his shoulders square to the LOS in the box as he makes his reads
-Shoots his hips through ball carriers and packs and punch as a violent hitter
-Has good instincts, play strength, and experience rushing the passer from the box and from the edge
-Wins his pass rush on the edge with a two-hand swipe or with the arm over/swim move to quick get around the tackle
-Has experience playing on multiple special teams units during his first few seasons for Purdue

-Senior prospect from Covington, Ky.
-Played both ways at linebacker and running back in high school, also serving as the team’s kick returner
-Appeared in 12 games, making two starts as a true freshman, finishing with 16 total tackles, including ten solo stops
-Appeared in all 13 games as a sophomore, making 12 starts and recording 92 total tackles, 61 solo stops, eight tackles for loss, including three sacks
-Started all 12 games as a junior, racking up 63 tackles (47 solo), 11 TFLs, 7.5 sacks, broke up a pair of passes, and recovered and forced a fumble
-Started six games as a senior due to a pandemic-shortened season, notching 54 total tackles (40 solo), 5.5 TFLs an interception, and a pass deflection

Derrick Barnes has been a mainstay on the Boilermaker defense since he arrived on campus. Barnes is a physical player that shows a lot of versatility to his game, having played a lot with his hand in the dirt coming off of the edge as a defensive end, but also has logged a lot of playing time in the box as an off-ball linebacker. Barnes’s calling card is his physicality as a tackler when he arrives at the ball carrier. He fires through his target, not letting up as he utilizes his power to go through his target. Here is a great play against Missouri where Barnes makes his read and comes to the edge of the line, closes down the space off the tackle then shoot his hips through #34 Larry Roundtree as he takes him down just behind the LOS.

In terms of a downhill thumper, you may be hard-pressed to find better options in this draft class than Barnes. His thick build with the broad shoulders and leg power make him an intimidating presence to meet in the hole. Here against Northwestern, Barnes fills the gap by triggering downhill quickly, going through the ball carrier and uprooting him and nearly getting the safety in the process.

Barnes has great play speed when he is able to diagnose quickly and run to the ball. He has great closing speed and plays with his hair on fire in pursuit of the ball. On this play in the same game, Barnes quickly reads the sweep and flies to the football, getting into the backfield before the blockers can realize he is there and blows up the play in the backfield for a big loss.

He does a great job playing with his shoulders square to the line both as a defensive end playing contain and also as a linebacker reading the play. Here against Indiana, he reads the option QB keeper while closing down space on the line, and then is quick to trigger on the QB, chasing him down in the backfield for a loss of yardage.

Here’s another great example vs Minnesota where lines up with his hand in the dirt on 3rd down and plays the run well as a defensive end. Notice how he gets into the tackle who a good heavy punch, playing with leverage and keeping his outside leg and arm free which forces the runner inside and forces him into the rest of the defense and still gets in on the play.

For being only 6’0, 238lb, Barnes plays with an impressive amount of strength and power. He not only showcases this when as an off-ball linebacker, but also as a defensive end. On passing downs, he would often get kicked down onto the line and rush the passer, coming up with a fair amount of production. His play strength and ability to convert speed to power allows him to hold his own against linemen who outweigh him by over 100lb. Take for example this play where Barnes gets off the ball and gets his hands inside the chest of #78 Daniel Faalele who is listed at 6’9, 400lb. Barnes pushes him back into the lap of the QB and works inside to knock the QB down for the sack.

While Barnes wins most of his pass rush reps with power or knocking down the blocker’s hands, he has shown a viable arm over/ swim move to win on the outside. Here against Boston College, Barnes comes off the ball from a standup position, getting the swim over the right tackle and turns the corner quickly into the QB for the sack.

Now there are several areas of Barnes’s game he needs to improve to play a big role for an NFL defense. One of those areas is his angles to the football, which can be suspect at times. Sure, he flies around well when he knows what he’s doing, but he can be slow to process at times with his eyes, having a delayed response to the play. When he gets going, Barnes need to do a better job of avoid trash in pursuit of the ball and keeping defenders off of his frame. On this play you see Barnes run right into the blocker and allow the lineman inside of his chest, riding him downfield away from the ball carrier and essentially out of the play.

Barnes is great when coming downhill, but he isn’t the same athlete in a backpedal or moving side-to-side. He can struggle with quick changes of direction and this can be a detriment when playing out in space. Here Barnes splits out onto the slot receiver and sees the quick throw to the TE in the flat, but loses his balance trying to redirect forward from moving backward. He then reaches out at tries to arm tackle the TE instead of squaring up the receiver, allowing him to break the tackle and get 1st down yardage.

Overall, Barnes would likely be a very high draft pick 20 years ago when size, strength, and physicality were the calling cards of a great linebacker. However, his limitations in coverage and change of direction skills make him relegated likely to a BUCK/MIKE role where he can be a downhill thumper in the run game and likely be subbed out on passing downs if he isn’t used as a pass rusher from the off-ball position or as an edge rusher.

There is a ton to like about Derrick Barnes though. He has a ton of college production, has the athletic profile of a great asset to have in defending the run, and has shown the versatility to be used as a pass rusher on the edge and generate pressure with his strength and power. He has special teams experience and will undoubtedly be utilized there early on in his NFL career, and could prove to be a core contributor on kick and punt coverage units with his pursuit.

As far as the Steelers go, Barnes would be a fantastic replacement for Vince Williams who was recently released. They both are rocked up linebackers that dabbled with edge rusher duties in college, are great to have at defending the run, and provide great special teams value. However, I would argue Barnes is a more athletic version of Williams coming out and has higher upside. He comps favorably to Jarrad Davis who is also a physical run stopper who can be spotty in coverage but is a violent hitter and has had great production as a pass rusher from the linebacker position. Pittsburgh obviously sees the potential in Barnes as well, as ILB coach Jerry Olsavsky attended his Pro Day and actually put him through drills. If one were to bet on a mid-round linebacker to land in Pittsburgh and fill that Vince Williams role, it would be wise to pencil in Barnes as that potential guy come draft day.