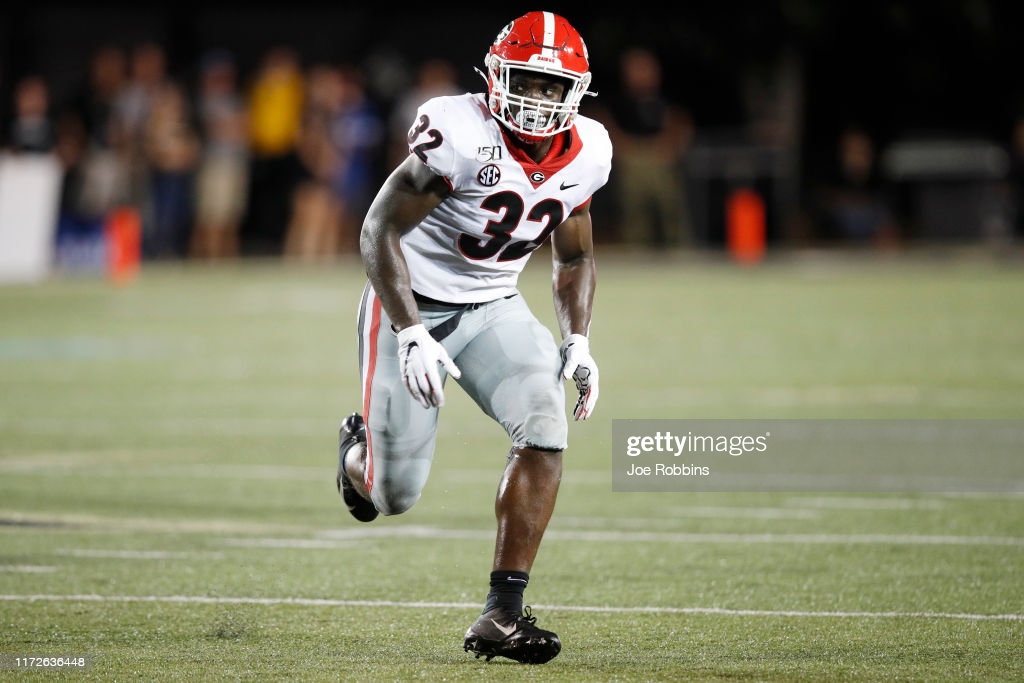 -Plays with good speed and explosiveness for the position
-Can work around blocks and through the trash around the LOS in pursuit of the football
-Has good closing speed on the ball carrier
-Has the instincts and functional athleticism to cover backs and tight ends
-Capable zone dropper in coverage that reads the QB’s eye well
-Moves well laterally, keeping his shoulders square to the LOS as he makes his read
-Shoots his hips through as a tackler and plays well behind his pads
-Quick to trigger downhill if needing to fill against the run or when sent on the blitz
-Has the skillset and background to be a good special teams player

-Senior prospect from Huntsville, Alabama
-Appeared in 14 games as a true freshman, with 22 total stops (10 solo), two TFLs,
-Played in nine games as a sophomore, starting five contests and recording 59 total tackles (25 solo), 1.5 TFLs, a sack and a forced fumble
-Played and started in all 14 games, recording 89 total tackles (50 solo), three TFLs, and 3 PBUs
-Started eight of ten games played as a senior, notching 49 total tackles 30 solo), four TFLs, a sack, two forced fumbles, and a fumble recovery for a TD
-Dealt with a foot injury for over half the 2020 season, but played in all but one game
-All-SEC 2nd Team in 2019, All-SEC First Team in 2020

Monty Rice is another one of the Bulldog defenders looking to hear their names called in the 2021 NFL Draft. Rice was Georgia’s defensive leader the past two seasons, making the calls and manning the middle. Rice has shown some versatility as an off-ball linebacker, being able to line up in the middle or outside, as well as split out in the slot against tight ends and other receivers. Rice is a player that possesses good speed and smarts, relying on his eyes to make his reads pre-and-post snap on the ball.

Here on this play against Auburn, Rice shows his instincts and play recognition. On the snap, Rice starts to make his zone drop in the middle of the field. However, he sees the QB’s eyes go to the running back leaking out to the flat and breaks on the ball, showing good pursuit and closing speed as he brings down the back for minimal gain.

Here is another example of Rice’s run-and-chase ability as a off-ball linebacker against Georgia Tech. On this play, he reads the motion of the receiver across the LOS as he leaks out into the flat and breaks on the receiver taking a great angle to make a play on the ball, ultimately knocking the ball out.

This play shows Rice’s ability to work through trash close to the line and how he can adjust his angle of pursuit. After making the call, the guard climbs to the 2nd level to pick up Rice, but he slips off the block, and loops around the edge to get #10 Bo Nix on the QB keep and hit him in the backfield for the loss.

Rice’s athleticism and movement skills make him a good option to have as a coverage linebacker both in zone coverage looks and when asked to pick up running backs leaking out of the backfield or tight ends going out on their route. On this play against Florida, Rice is asked to cover #2 La’Mical Perine out of the backfield on the Texas route. When Perine makes his break inside, Rice is able to turn and put his hand in the passing lane, breaking up the pass.

Despite being a good athlete overall for the position, Rice lacks the desired length and change of direction ability you would like to see from premier off-ball linebackers. His lack of length can be a problem when trying to catch runners from behind. Here Rice reads the play right on the run, but can turn the corner fast enough, and just misses the QB on the designed run, being just outside of his reach.

Here is another example of Rice’s lack of size and power where he correctly comes downhill to fill against the run, but is unable to work off of the block, getting hooked by the tackle and eventually pancaked to the turf.

While being normally a sure wrap-up tackler, Rice can struggle to bring down big backs at times that run with good contact balance. Here he does a great job fighting off of the block to make a play on #4 Tank Bigsby, but he leaves hit feet and Bigsby shakes him off to rumble on for 1st down yardage.

Overall, Monty Rice has proven to be a reliable commodity during his time at Georgia, and he should look to provide a similar contribution in the pros. While a good athlete in terms of straight-line speed and ability to move in space, he lacks that elite twitch and the size to have a high ceiling at the next level. Rice’s length also can present problems when taking on blockers, but he has shown the ability to sift through the mess in the middle and locate the football. He matches what the league is looking for in a run-and-chase linebacker that has the coverage chops to play in zone and man. He would be best suited to come in right away and contribute on special teams where he can make an early impact and also be used in sub packages and come on the field when a larger, less mobile linebacker should be taken off the field. As he develops, Rice can definitely become an average starting caliber player in the league that serves as a great floor option for a defensive front.

For Pittsburgh, Rice could be considered as a potential Vince Williams replacement in the middle rounds. Sure, Williams played bigger and stronger against the run and offers more as a pass rusher, but Rice plays with more range outside of the tackles and wouldn’t be as much of a liability against the pass either. He compares favorably to another ex-Steeler, L.J. Fort, who was recently released by the Ravens. Should Pittsburgh not be interested in spending limited salary cap on bringing back Fort, Rice could be another option they target come April.