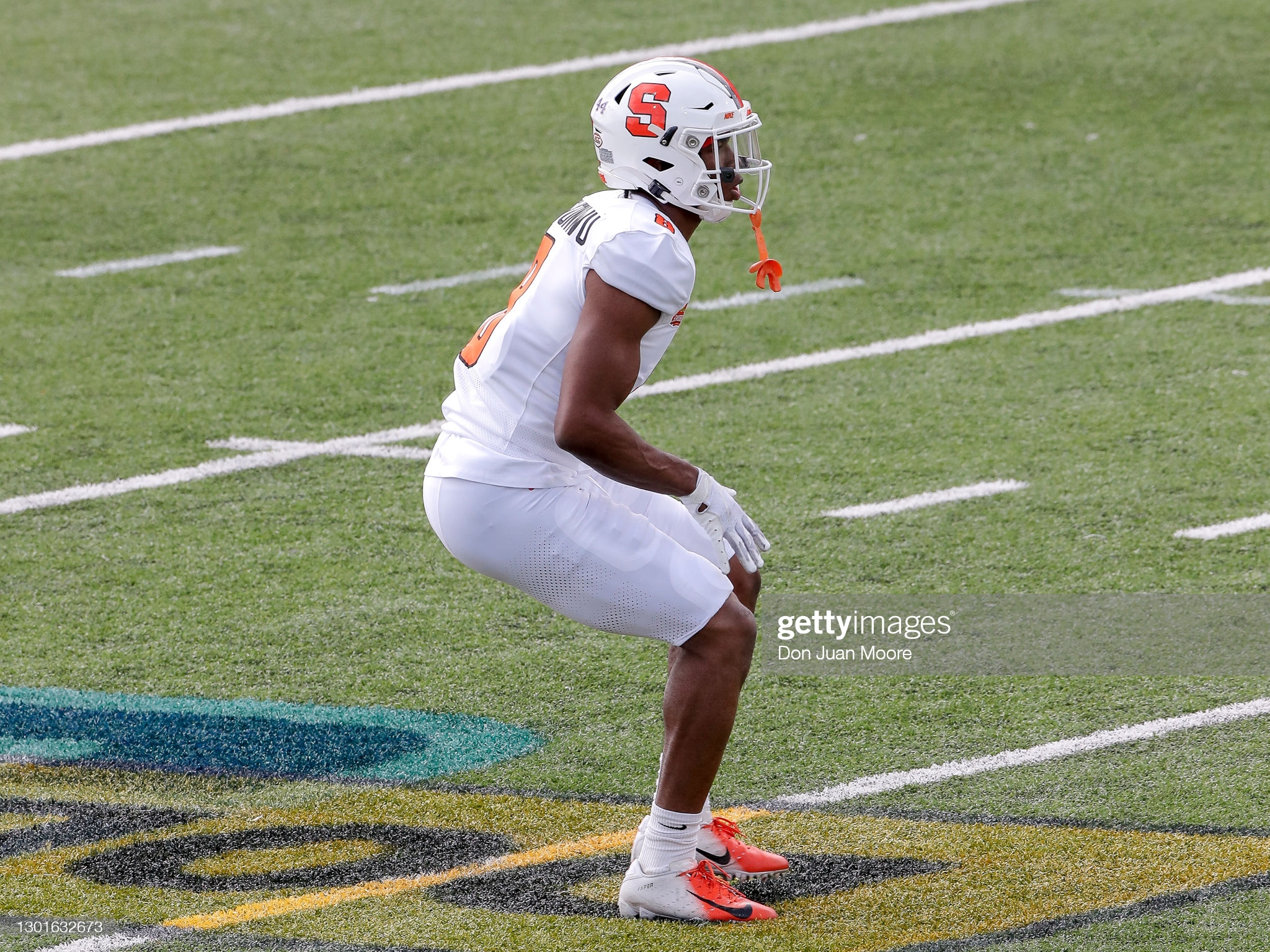 -Great length for the position
-Physical defender at the catch point
-Rare build for the position with good quickness and long speed
-Excels in zone coverage and does a good job reading QBs eyes to jump routes
-Has real enthusiasm as a tackler with solid technique and willingness to stick his face into the fire
-Massive wingspan with good overall ball skills to make plays at the catch point
-Loose, fluid hips with good explosiveness to drive on the route

-Man coverage anticipation and overall feel is lacking
-Made just 26 plays on the ball in two years (13 pass breakups, three picks)
-Labors to throttle down and work back on stops and comebacks
-Can be a bit too physical at the catch point, leading to some flags
-Needs to fully tap into his length to be a physical press corner and cap off routes

Few corners in the 2021 NFL Draft — and in the NFL in general — have the size and length that Syracuse cornerback Ifeatu Melifonwu possesses.

At 6’2”, 183 pounds with a 78.5-inch wingspan, Melifonwu possesses the size to absolutely swallow up receivers in man coverage, and the ability to close in on throws in zone coverage.

He’s an impressive athlete on tape, but I came away from watching Melifonwu wondering why he didn’t tape into his length and physicality in man coverage, becoming a true shutdown corner.

Melifonwu is a terrific tackler overall in space and leans into that wingspan in that area, but his tape leaves a bit to be desired from a coverage standpoint.

The thing that stands out right away on Melifonwu’s tape though is his physicality.

Opening up the 2020 season against North Carolina on the road, Melifonwu set the physical tone early, laying out the North Carolina receiver on a quick throw.

He shows the ability to close quickly, stays square to the receiver and uses great form to explode through the core of the receiver for the big stick near the line of scrimmage.

Later in the game, Melifonwu showed off his ability against the run, working off the block on the boundary to make the stick on UNC’s Michael Carter in the hole.

Melifonwu’s length and strength allows him to throw the blocker off of him, readjusts his alignment to get square to the ball and makes the stick for the stop.

Syracuse rarely tapped into Melifonwu’s explosiveness off the boundary as a blitzer, but when they did against NC State, he really showed up.

Melifonwu does a great job disguising the blitz here, never showing the quarterback or the receiver he’s coming. At the snap though, despite the false step initially, Melifonwu covers a ton of ground and explodes through the unsuspecting QB for the sack.

In off man, Melifonwu is really comfortable, much like he is in zone coverage.

Here against Clemson in 2020, Melifonwu does a great job in off-man reading the dig route.

Melifonwu clicks and closes quickly, driving downhill with force to the catchpoint to break up the throw.

Earlier in the game against Clemson, Melifonwu showed off his ability to recover and get vertical in a hurry to disrupt a throw.

Here against Cornell Powell, Melifonwu does a great job recovering quickly after biting slightly on the out and up, allowing him to recover and get into Powell’s hip pocket to break up the deep shot.

Overall, I think Melifonwu has all the makings of a terrific No. 2 at the next level with the more experience he gains. I would love to see him land in a zone or off-man heavy system where he can excel reading the QB’s eyes and make plays.

He obviously has the tools to be a shutdown man in press coverage with his length and physicality, but he’s simply not comfortable there, and would really struggle in press man due to his below average anticipatory skills.

All that said, he’s a top 40-worthy selection and can be a really strong No. 2 corner right away in the league.