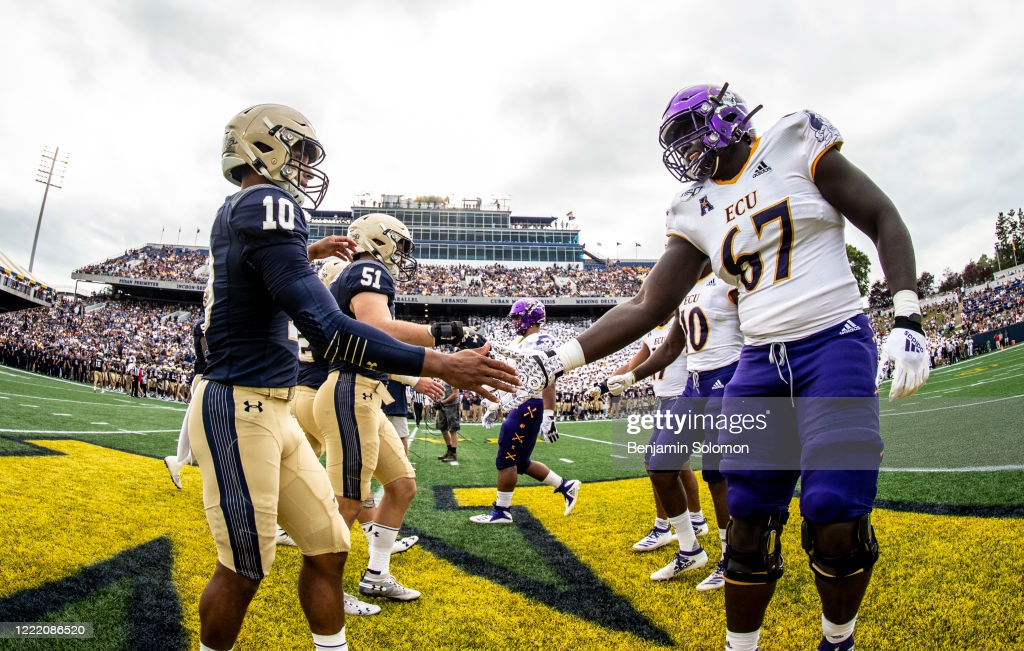 -Has a fair amount of experience with 26 starts and 33 overall career games played in his college career
-Has a lean, athletic build for the position
-Has the long arms you love to see in terms of getting hands-on the defender first (35 1/4”)
-Good athlete for the position in terms of burst, foot speed and movement skills
-Quick out of his stance in the run game, getting into defenders’ pads with a strong punch
-Runs his legs well on contact and is effective on down blocks
-Plays with a motor and will proceed to block defenders downfield and to the sideline till the whistle
-Has a good kick step with his vertical set to set the arc of the pocket
-Great at the quick set, being quick out of his stance off the snap
-Possesses great lateral movement skills in terms of mirroring defenders from side to side fairly seamlessly
-Has experience playing both tackle and guard and can execute both well with his movement skills and play demeanor

-Redshirt Senior prospect from Augusta, GA
-Also lettered in wrestling, competing in the heavyweight division in high school
-Suffered a season-ending injury after playing in the season-opener of his true freshman season, thus redshirting the 2016 season
-Played in seven games with five starts, four being at LT and one being at LG as a redshirt freshman
-Started all 12 games at left tackle as a sophomore, being selected as game captain on eight occasions
-Was ECU’s starting left tackle in all 12 contests as a junior
-An undisclosed injury limited him to just one game in 2020 in his senior season

D’Ante Smith from East Carolina University is an interesting evaluation for a variety of reasons. He is from a smaller school in the AAC where he was able to play lower-level competition a majority of the time, yet showed the traits that teams look for in pro tackle prospects. Smith is a very long prospect, having great arm length and the wingspan you want from a blindside protector. He is kind of leggy, lacking ideal body mass, especially in the lower half of his frame. Yet he plays with strong hands at the point of attack and possesses movement skills you love to see in a blocker. Smith’s lateral movement and ability to mirror defenders with his feet is impressive to say the least. A good example of this is in this rep vs Quincy Roche at the Senior Bowl where he is quick out of his stance, has active hands and feet, picks up Roche on the rush to the outside, and keeps his base while moving his feet laterally to stay in front of Roche the entire rep.

Another great example of Smith lateral movement ability in this rep against Old Dominion where he picks up the inside rush and works back to the outside with the pass rusher, staying in lockstep with the defender the entire rep until the ball is released.

Smith’s length and athleticism make it difficult for pass rushers to run the loop on him with his reach and quick feet. When everything is synced up from and upper and lower perspective, Smith can be tough to beat around the corner. On this rep, Wyatt Hubert of Kansas State tries to get the edge against Smith, but Smith stays in front of him, making him run up the arc and run all the way around while knocking down his hands as he attempts to get free.

Smith was originally recruited as a guard prospect coming out of high school and received some playing time at LG in his freshman campaign. He showcased this versatility further at the Senior Bowl, playing both tackle and guard effectively the entire week. Here on this rep vs Marlon Tuipulotu of USC, Smith lines up at RG and shows a great quickset out of his stance. He gets his hands in the defender’s chest and knocks down the defender’s hands as he attempts to hit Smith’s hands down, he eventually wins the rep with the defensive tackle losing balance and falling to the ground.

However, Smith tends to rely on his length and athleticism a little too much, often times lunging forward on his pass sets and causing him to whiff on assignments. He’ll try to get hands-on the defender without running his feet, which will lead to the defender working past him on the rush. Here Smith aligns at RG and has the defender cross his face inside due to Smith lunging forward on his quickset. However, Smith is able to regroup and ride the defender away from the QB and into the turf. Sure, its impressive that Smith can “win” a rep that he’s seemingly lost, but he needs to do better at cleaning up this area of his game.

Smith’s movement skills are not just reserved to the passing game. He does well at climbing to the 2nd level and getting out in space to pick up defenders in the run game. Watch here as Smith climbs up to pick off the linebacker on this outside zone run to the left, running the defender to the sideline.

Smith also plays with good leg drive given his slight frame in the run game, especially on down blocks when asked to wash out interior defenders or linebackers in the box. Here against Old Dominion, Smith comes down on the DT, washing him down and clearing a big hole that the running back bursts through for the score.

His speed and quickness as a pulling guard is legit as well. Watch him pull from the right to the left on this play to pick up Georgia LB Monty Rice coming down to the LOS, blowing him up and sitting him down for the highlight knockdown block.

Here is an example where Smith clearly loses due to him over extending on his quickset. Here #7 Oshane Ximines exploits Smith lunging forward on his pass set, slipping him inside and making the TFL whilst Smith stumbles and nearly falls face-first into the ground.

Smith is a good athlete for his size, but he lacks functional strength and mass, particularly in his legs. This leads to him getting pushed back via power rushers or can cause him to get displaced fairly easily. His weight distribution can also be uneven due to this, and he will need significant development to improve this. Watch here as he gets the kick step on his vertical set, but then gets his weight moving too far to the left, making it easy for the defender to come back inside swim move while Smith is still sliding to the arc of the pocket.

Smith is a great version of a developmental tackle prospect that oozes upside with his traits and athletic ceiling but is still pretty raw as a technician and needs to improve his technique and get stronger to hold up against NFL-quality edge rushers. To his credit, Smith showed well at the Senior Bowl all week and displayed the versatility teams will love to see playing both tackle and guard. However, he will have to add more mass to his frame to not cede easily to strong power rushers who would look to move him off his spot.

Smith is a project, but his quick feet, length, and play demeanor make him a player worth taking that chance on. He would be best suited for a West Coast, zone running scheme at the next level to utilize his movement skills and quickness. As far as a player comparison goes, the small-school, undersized tackle prospect with great athletic ability reminds me or Terron Armstead. However, Smith isn’t as refined as a blocker as Armstead, and probably is closer to recent draft selectee Saadiq Charles from an athleticism perspective. He would be an interesting fit as an undersized blocker for Pittsburgh, but the Steelers have shown they are willing to deviate from that standard in the past with guys like Kelvin Beachum. Should Pittsburgh look to address tackle later in the draft, Smith would be an intriguing option as a developmental guy who can sit a year, learn, and get stronger to one day capitalize on his potential and offer flexibility with being able to play both inside and outside as Pittsburgh as done with Matt Feiler and Chris Hubbard in the past.