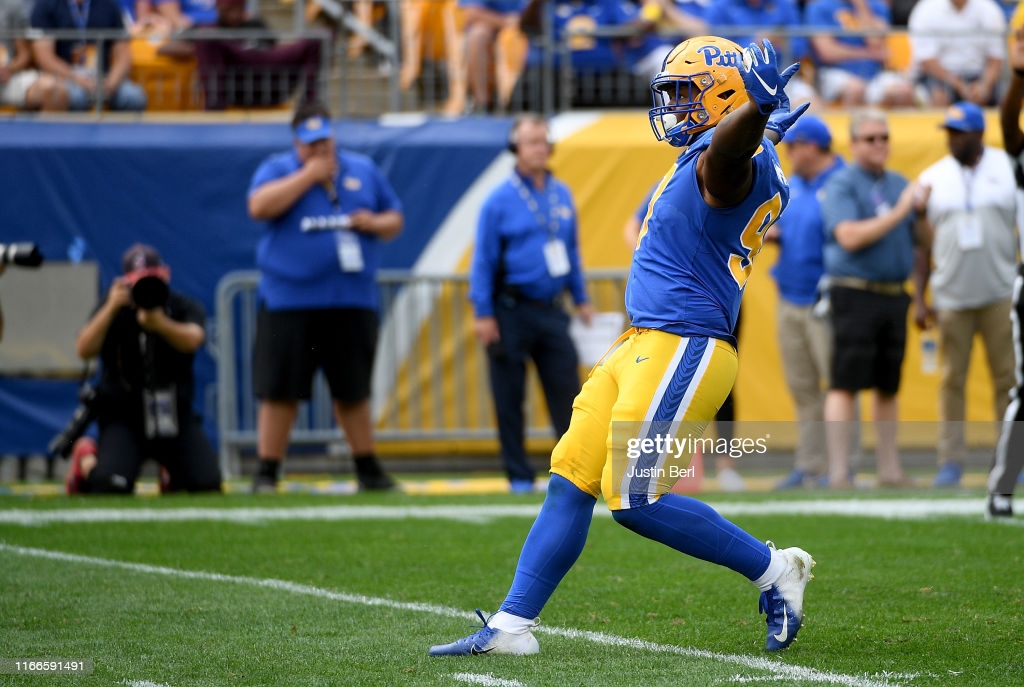 -Played multiple spots on the defensive line, from head-up on the center to a three-technique
-Has relatively good quickness and change of direction ability for a player his size
–Utilizes a push-pull and swim move as a pass rusher to win on the inside
-Strong upper body that can pull blockers far bigger than him off their spot
-Shows a great job of pursuit of the football
-Does a great job shooting gaps and being used on twists and stunts with other defenders

-Lacks ideal length and size of a prototypical every down interior defender
-Needs to add more to the arsenal as a pass rusher, as well as a good counter move
-Tends to lose most reps when push/pull move doesn’t succeed
-Plays with inconsistent leverage, having his pad level rise and making him an easy target for blockers to latch on to
-Needs to play with more functional strength and sand in the pants to anchor down against the run
-Has moments where he panics when initial rush fails and will pause and even stop his rush entirely

-Redshirt Junior prospect from Washington D.C.
-Uncle, Parnell Motley, played cornerback at Oklahoma from 2016-2019
-Redshirted as a true freshman in 2017
-Played in 13 games as a freshman with one start, recording 16 total tackles (six solo), 1.5 TFLs, and half a sack
-Broke out as a redshirt sophomore in 2019, collecting 41 tackles, 12 tackles for loss, 10.5 sacks, and two pass breakups
-Opted out of the 2020 college football season
-Second team All-American in 2019, first team All-ACC in 2019

Jaylen Twyman of Pitt opted out of the 2020 season after having a great 2019 campaign on the stat sheet. Racking up double-digit TFLs and sacks for a defensive tackle prospect is an impressive feat in today’s game where the ball is coming out quick and when interior defenders are seeing double teams more often than not. Twyman is a smaller player that wins with quickness and with his hand usage. He loves to utilize the swim move on plenty of his rushes as he shoots gaps. Here against Penn State, Twyman hits the center with the swim and runs right into the lap of the QB.

Along with the swim move, Twyman has a signature push/pull move he will use to set up the swim move or just by itself. He has a strong upper body, having put up 40 reps on the bench press during his Pro Day, and that can be seen has he knocks blockers back that are far bigger than him, then pull through to get off the block. Here against Ohio, Twyman yanks the guard aside on the push/pull, getting the arm over on the swim move and finishes with the sack in the end zone.

Twyman is great at shooting gaps and being used on twists and stunts with other pass rushers to cause confusion and havoc. Here against North Carolina, he executes the push/pull on the center, throwing him to the ground and bursts forward up the pocket to take #7 Sam Howell to the ground.

Some of Twyman’s best work comes as a pass rusher when aligned as a three-technique on the guard where he can win with quickness. Here against Virginia Tech, Twyman goes to the outside of the right guard, swiping down the blockers’ arms and makes it through the gap, closing down space and gets in on the QB sack.

While Twyman is a quick, squatty build as a defensive lineman, he does need to add more functional mass and strength to his lower half. He too often stands up tall against the run or on his pass rush, giving the blocker access to his chest and neutralizing his effectiveness. Here against North Carolina, he comes up high off the ball, getting over extended and immediately gives ground the blocker, getting driven back off his spot.

In the same game, we see Twyman’s lack of using other pass rush moves to get off of blocks. Here he tries to hit the push/pull against the guard, but the guard knows it is coming and anchors in, neutralizing and effectively ending Twyman’s rush.

When his push/pull move fails, Twyman tends to panic as a pass rusher. He with either try to loop around the blocker with speed (he’s not the best athlete linearly) or just try to push the pocket. Here is an instance against the Tar Heels where Twyman tries to go around outside the guard, but can’t win his outside shoulder, getting handled fairly easily on the play.

Twyman will have a tough time winning against size and power at the next level. He doesn’t generate much push up front when head-up on a blocker and can be easily driven back due to lack of mass and leverage issues. Here against Virginia Tech, the LG lands a good initial punch on Twyman, knocking him back slightly and stays with him laterally, completely taking him out of the play.

I understand where Jaylen Twyman’s thinking may have been to opt out and declare for the draft after the statistical season he put up in 2019, but he definitely could’ve used another year in college to develop his game, get stronger, and get more experience before making the jump to the pros. He did add over ten pounds of weight to his frame and showed great upper body strength at his Pro Day, but he ran slow and looked like he may have sacrificed some speed and explosiveness in the process. As far as comps go, P.J. Hall comes to mind as an undersized, uber-productive player coming out of Sam Houston State that won with quickness but has struggled to adjust to the league. I foresee Twyman facing a similar transition process, as he will need to develop more hand usage and work on playing with leverage to hold up against bigger, stronger blockers.

As far as the Steelers are concerned, Twyman isn’t really a fit. He projects more as a three-technique in a 4-3 defense rather than a nose tackle in a 3-4. Sure, he can play inside on sub packages, but his liability as a run defender due to lack of base isn’t very appealing. I could see Pittsburgh maybe take a flyer on Day Three should he slip, but they will probably look for a sturdier presence on the inside and leave Twyman for an attacking four-man front to come in and be a depth guy and situational pass rusher to start his NFL career.