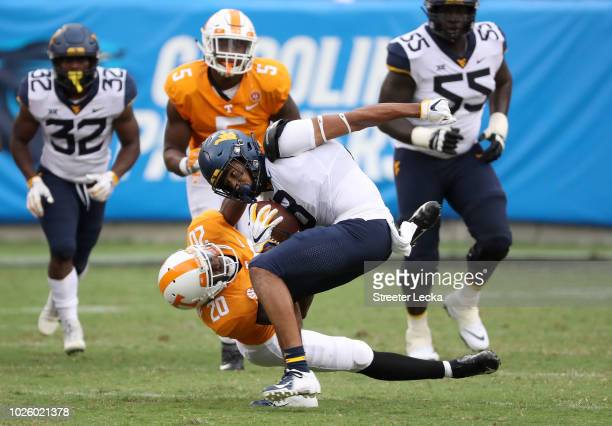 Each season in the NFL draft defensive back is one of the positions that is drafted most often.  Over the last 5 years there has been an average of 51 corners and safeties taken per year.  That’s about 20% of the draft.  Bryce Thompson is a candidate in this year’s draft who has experience playing on the outside, inside in dime and at safety.

Against the pass, he lined up in just about every coverage. In Press Man coverage with out jam when his is patient he has solid footwork to match receivers and solid long speed to run with deeper routes. In Off Man coverage he has a solid backpedal, with good pad level and solid change of direction to attack downhill.  He has good reactions on screens to get downhill and attempt the tackle. In Zone coverage, he has a good understanding of his area and shows good timing to pass off receivers leaving his area. He played in the box in dime coverage usually to play underneath in breaking routes. He flows to the ball well and will make the effort to tackle. He showed good awareness with no receivers to his side to help on routes coming from the other side. He has good ball production showing good aggressiveness to go after the ball and good hands to hold on to it.

Vs South Carolina, Thompson (0) is at the bottom of the screen. He will start to drop into a shallow Zone coverage but reads the screen and takes down the receiver immediately.

Vs Alabama, he opens to the outside and is beat off the line but is able to recover to break up the late throw in the end zone.

Vs Alabama, he is at the bottom of the screen and shows very good awareness on this play to try to get to the deep middle and has a chance to make a play on the ball but just misses.

Vs Alabama, again at the bottom of the screen he stays with this play better the earlier slant and uses a little grab on the outside arm to get his right hand around and break up the pass.

At Auburn, he’s the safety in the middle of the field and initially takes away one option and the hustles across the field to make the interception.

Vs Florida, at the bottom of the screen he is trying to play both receivers to his side and reads the QB to get in the passing lane.

Against the run, he is willing to make the effort to make the tackle and is solid with attacking low and cutting down runners.  He is not overly physical but is willing to help on the edge to force the play inside to teammates.

At South Carolina, from the near safety position he gets low on the tackle on edge to cut down the running back.

In Press coverage, he lunges trying to jam receivers and NFL receivers will eat that up. He opens his hips too quickly and it sets him up to be beat on the second move and that leads to grabbing WR’s so they don’t get too far. When coming downhill from deeper coverage he needs to breakdown sooner to not overrun the ball. His angles when playing safety were adequate and in Cover 2 he’ll stray too far to the middle of the field.  Overall tackling is marginal lacking play strength to provide hit power and tackles too high. Adequate getting off of WR blocks to get to the ball carrier. Marginal matching receiver in the slot and was forced to grab on crossing routes.

Vs Auburn, he reads the screen and gets around the block but goes for high tackle and the receiver gets 8 yards after initial contact.

Vs Florida, at the bottom of the screen he will lunge with his jam getting  him off balance and then he grabs the receiver on the crossing route.

Overall, Thompson has good Zone awareness and anticipation and good COD to close on the ball when moving downhill.  He has experience on the outside and at safety and good ball skills and production. Areas to improve would be breaking down sooner when coming to make a downhill tackle, working on tackling lower on the ball carrier and grabbing receivers less within the routes.

He was primarily and offensive player in high school so he’s still relatively new to defense with three years of experience.  He has some versatility which could help a defense but would be best on the outside in an Off Man or Zone coverage scheme were he can play with his eyes on the QB. For Pittsburgh he could be a developmental player and competition for the #3 and 4 corner positions behind the starters.

Games Watched:  2020 – At South Carolina, vs Kentucky, Vs Alabama, At Auburn, Vs Florida