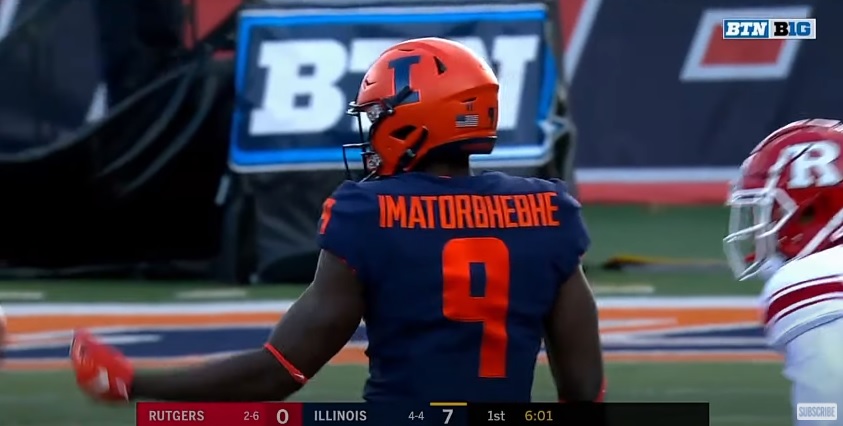 -Long strider that can threaten defenses over the too
-Underrated, physical receiver that excels playing through contact at catchpoint
-Adequate catch radius and knows how to box out defenders
-Physical freak in the air; elite vertical to highpoint the football
-Power-forward like on contested catches
-Great overall body control for the position
-Willing, physical blocker that taps into length on the boundary as a blocker

-Route tree is currently limited to hard angles such as posts, slants, and deep overs
-Not as quick twitch at line of scrimmage to win early in routes and get vertical
-Won’t offer a ton of YAC ability unless hit in stride to rumble downfield
-Needs to refine hand usage overall early in reps to stay clean and get into routes
-Mostly limited to vertical attack as a developmental X receiver

-Played in 20 career games in college (18 at Illinois, 2 at Southern California in 2017)
-Finished two-year career at Illinois with 55 catches for 931 yards and 12 touchdowns
-12 career receiving touchdowns seventh most in Illinois history
-Second in Illinois history in touchdown receptions in a single season (9), one behind the record of 10
-All-Big Ten honorable mention in 2019

In a deep wide receiver class, I find myself searching for the sleepers that could provide great value on Day 3 for teams that might not need to invest heavily in the position.

This year, that guy for me is Illinois’ Josh Imatorbhebe, a physical freak that can jump out of the stadium and make plays on the football in the air with consistency.

Been calling him my WR sleeper the past year or so. Insane traits. Never quite had a passable QB at Illinois. https://t.co/bn1C8Szzvt

Though the stats aren’t quite there compared to other receivers in the class, Imatorbhebhe has some impressive traits to work with, specifically his ability to win in the air thanks to freakish vertical explosiveness and an ability to snatch the ball out of the air with ease.

Here against Michigan in 2019, Imatorbhebhe shows his ability to get vertical and win in the air, exploding into the air to split the two Michigan defenders and snatch the ball out of the air for the big play.

His ability to climb the ladder is quite impressive. He makes it look so darn easy.

Against Iowa in 2019, Imatorbhebhe displayed his body control and ability to box out to make a play in the front corner of the end zone against the Hawkeyes’ defender.

He runs a nice route here to create just enough separation to use the sideline to his advantage. I love his ability to finish through contact, showcasing strong hands to clamp onto the football and hang on as the defender rakes his arms late in the rep.

He really seems to thrive through contact and excels on back-shoulder balls.

Here against Michigan State on the road in 2019, Imatorbhebhe bails out his quarterback by working through contact and stopping short to make a play vertically and finish through a big hit from the lurking safety.

Imatorbhebhe is really good on back-shoulder throws working through contact, which is where he could carve out a role in the NFL, especially in the red zone.

He’s good at clearing himself on back-shoulder throws and has a knack for finishing plays. He also flashed his strength at the end of this, dragging the corner in to the end zone.

In the slot here against Michigan State, Imatorbhebhe shows he can clear defenders quickly, and you can see the build-up speed on the over route.

Once he makes the catch on the run he has the strength and speed to run away from the defender for the score.

That’s what he’ll offer you in terms of YAC. He’s not going to run through defenders or shake anyone in space, but if he has a runway he’ll pull away from defenders easily with his long strides.

Overall, I really like Imatorbhebhe in this draft class as a mid-to-late Day 3 receiver that could dominate in the air in a vertical attack as a developmental X receiver. He should be able carve out a role in a vertical attack in the red zone at least right away. I also see Imatorbhebhe making waves as a twitchy special teams player in the NFL while he develops a route tree.

He’s the classic traitsy receiver to take a shot on in the draft on Day 3.