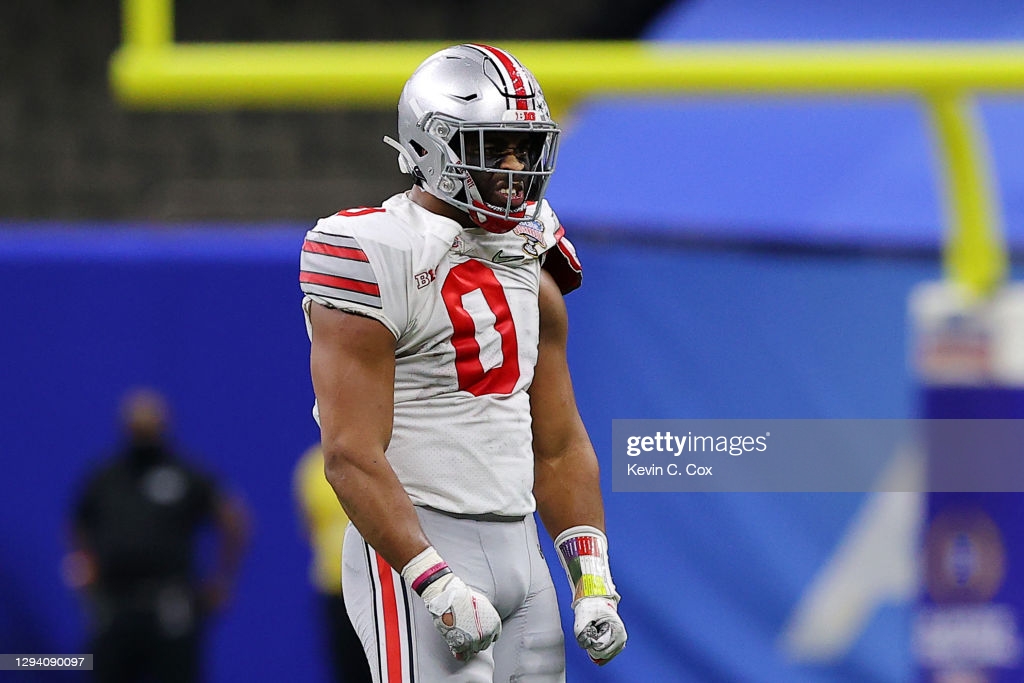 – Lacks ankle flexibility to bend corners on pass rushes
– Relies on power moves to shed blocks, limiting effectiveness on disruption in short passing game
– Stiff hips give him issues changing direction in short areas
– Struggled with stringing together counter pass rush moves after initial rush was stymied
– Lack of arm length allows defenders to get hands inside of his pads
– Limited reps in pass coverage may limit his versatility in schemes

Physically imposing and powerful athlete are a few adjectives to describe Ohio State defensive end Jonathon Cooper. After missing most of his senior season in 2019, Cooper put on a show in 2020, finishing the season with 3.5 sacks and 24 total tackles. He was a stud among a talented defense who should have at least five defensive players drafted in the 2021 NFL Draft.

First play is probably his best play from this season for Cooper. He does a nice job dipping and ripping past Clemson’s Right Tackle, and closes for the strip sack. He does a great job turning the corner and finishing the play.

Against Indiana, Cooper does a nice job attacking the outside hip of the tackle, swatting the hands and making the sack. He shows quickness and physicality at the point of attack.

Speed to power is the go to move for Cooper when he rushes the passer. Against Penn State, he sets up tight end Pat Freiermuth, attacking up field then uses a long arm bull rush to walk him back into the quarterback. Explosive, dominant play from Cooper.

Cooper once again wins quickly and efficiently with an inside move. He sets it up by attacking straight upfield, hand swipes and gets pressure, forcing an errant throw. Cooper’s flashes like these makes him an intriguing prospect.

However, as mentioned above, Cooper struggles to bend the corner, with his stiff hips and lack of ankle mobility. Cooper tries to run the hoop below against Penn State but doesn’t have that flexibility to dip and win on the corner to get past lineman. Once that move is stymied, he doesn’t have a counter move he uses.

Again, this time against Alabama, Cooper tries to win with an outside pass rush by bending the corner to get to the quarterback. Alex Leatherwood stops his pass rush and ends up burying him after Cooper exposes his chest. No counter from Cooper either on this play.

There are limited reps of Cooper dropping back in coverage but he does a nice job on this play reaching his proper depth and making an open-field tackle to finish the play. There are some tools you could work with in Cooper’s game, but as of right now coverage is not a strong suit.

All things considered, Jonathon Cooper can bring a hardworking, lunch pail kind of attitude to Pittsburgh. He is a player who gets the job done, although it may not be flashy or overly freaky in terms of athleticism. Cooper projects better in a 4-3 gap scheme, but if the Steelers decide to draft him, he could be used as a situational pass rusher who has the versatility to play one of the three down lineman spots in the Steelers’ 3-4 scheme. After having a strong showing at pro day, Cooper could likely be selected early on day 3 of the draft.

Games Watched: vs. Indiana,  at Penn State, vs. Clemson, vs. Alabama, vs. Rutgers