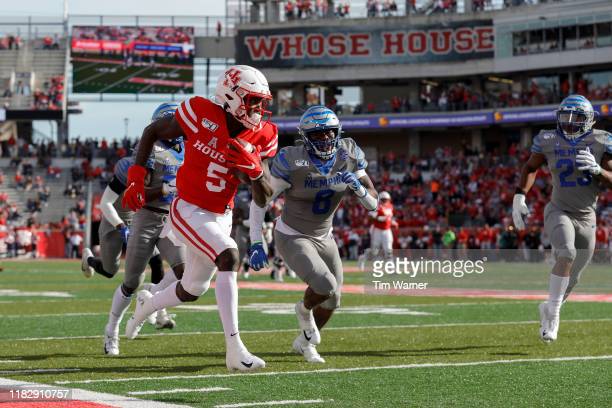 With the Steelers unexpectedly re-signing JuJu Smith-Schuster this offseason, it certainly helps with the depth at the receiver position, so much so that you may be able to take it off the positions of need for the draft. However, it’s hard to picture this Steelers team leaving a draft without a receiver, taking one in all but three drafts dating all the way back to 1987.

With Smith-Schuster assumingly sliding back into the slot for Pittsburgh it still leaves the team without a true vertical threat to consistently take the tops off of the defense. With a nickname like “Speedy,” University of Houston wide receiver, Marquez Stevenson would be perfect for doing just that. He certainly has earned the rights to the nickname and give the Steelers a speed element over the top that they haven’t had since the likes of Mike Wallace.

Stevenson’s tape is filled with reps of him simply running past defenders. In the below clip, he’s lined up in the slot and gives a simple jab inside. That’s all it takes for Stevenson to win, one misstep. The impressive thing is, it still doesn’t look like he’s opened up the whole way. He’s just going for a jog in the park.

Very similar play here, Stevenson again lined up in the slot. This time he uses a rocker step to get the defender off balance and even with the underthrown ball he’s still able to outrace the defense for the score.

You’re not going to see a very developed route tree out of Stevenson as he primarily ran seams, posts, curls, slants, and screens in Houston’s offense. If it works, why fix it? Here, against Tulane, Stevenson runs a post from the slot. He has a very subtle stem outside, attacking the defender’s outside shoulder. This minute detail and the defender’s respect for his speed, causes the defender to flip his hips outside. It’s all Stevenson needs as he cuts inside on the post route. The defender has no chance after his baseball turn and gives up the six points.

While it’s not Stevenson’s strong suit he does have some contested catches on tape. Here’s another seam out of the slot. You’d like to see him be able to stack the corner earlier so he could press off the sidelines and give his QB more room for error. Nonetheless, he’s still able to fight through the contact and make a nice grab for the explosive play.

Here’s another contested catch, where Stevenson has to contort his body on the back shoulder throw on his wheel route. He shows a lot of grace and body control on tape and a few examples where he proves he has good sideline awareness while catching the football.

One thing that is noticeable on tape is he either needs to get stronger, improve his releases, or both. When facing more aggressive and physical corners you can see him get overpowered. Which would make me hesitate to put him inside in the slot at the pro level. He wins a ton inside vertically, but the technique of guys at the pro level is going to be a stark difference from what he saw in the AAC.

Here you can see in the slot and tries a stutter release, but instead gets knocked on his backside. This will come with some coaching and experience as it wasn’t something he dealt with a ton in college but was a problem when he did.

This is another example of Stevenson getting physically out-matched in the same game. He gets off the line easily but again fails to use his speed to stack the cornerback. Then, rather than trying to fight inside for the ball, he just continues his route out of bounds. The QB puts this ball right where he needs to, it should be a 50/50 ball, but Stevenson makes it a 0/100 in favor of the corner.

We know physicality isn’t why a team would take a flier on Stevenson so let’s get back to his speed. It allows him to be a YAC monster. All Stevenson needs is a crease and he’ll make you pay. Watch him take turn simple curl into a crib call by ruining the angles of every single defender in the SMU secondary. That’s the definition of game-breaking speed.

He’s also an asset in the screen game. Here, against Navy, he takes a bubble, and outside of an incredible block by #85, uses nothing but his speed to hit paydirt.

Stevenson also has his fair share of experience utilizing his speed with sweeps. It’s easy to see how he could slide into a Ray-Ray McCloud-type role in the Matt Canada ran Steelers offense.

Diving into the knocks on Stevenson, he came off to me as a polarizing player on a play-to-play basis. Similar to how Diontae Johnson is where he does something remarkable one rep then leaves you scratching your head the next. In the 5 games I watched, I saw 4 pre-snap penalties on Stevenson. Jumping the snap, especially as a wideout, cannot happen and is all about focus.

You also saw him taking some plays off. Some of it it was due to coaching. During his first few years at Houston, they ran an Art Briles-inspired offense where they teach you to save your energy on run plays. That did change once Dana Holgerson was hired and implemented an air-raid-style offense that required receivers to block much more. However, there still were times like below where you saw him just jogging through a route.

Here’s another example where I’m not entirely sure if he heard a whistle from the ref or was jawing with the USF sidelines. Either way, he’s the only one that quits on the play.

Stevenson also sometimes felt pressed to make a highlight play. Here, he attempts an ill-advised hurdle and gets crushed. He fumbles as well, but luckily it was out of bounds.

The last thing to discuss about Stevenson is he’s an explosive kick return threat. He averages right around 26 yards per return and that includes three returns for scores. Below, is one against Tulane where you can see he uses his vision in the open field to read his blocks and follow the caravan on the way to the end zone.

Marquez Stevenson certainly has a place on an NFL roster.  With his ability to take the top off the defense, he offers more than your “gadget” guy at the next level, but anything more than 1-2 deep catches a game I’m not sure I see from him until he greatly approves his route running and releases. He’s someone I’d be willing to take late on day three and see if he can make enough splashes on offense and as a returner in the preseason to make the team.