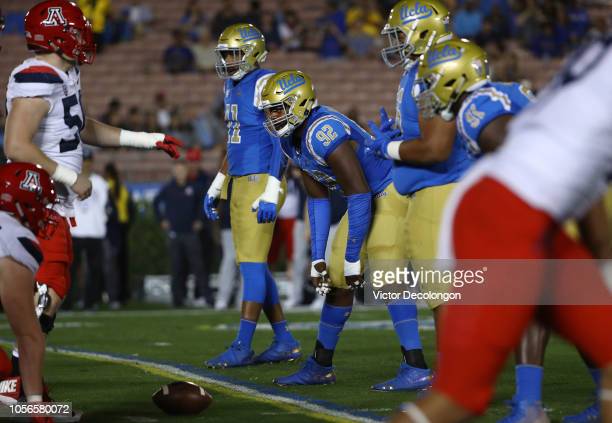 -Has lined up all over the defensive front from head-up on the center to outside shade of the tackle on the edge
-Pretty good athlete for his size in terms of speed and explosiveness
-Has the ability and movement skills to move up and down the LOS and be disruptive
-Long arms to deflect passes or get hand-on a blocker first to shock them back
-Plays with a lot of effort as a pass rusher and will chase the football in the run game
-Pursuit of the football is his calling card, playing like his hair is on fire
-Compact size and quickness are assets when used as a gap penetrator
-Shoots gaps extremely well and plays the stunt/twist game well with other defensive linemen
-Normally plays pretty low to the ground and with good leverage under blockers’ pads
-Has natural leverage when using a bull rush
-Has a good spin move when rushing on the inside against guards or the center

-Redshirt Senior prospect from Portland, Oregon
-Has three brothers – Owa (played football at UCLA 2010-14 and New York Giants 2015-16), Ighodaro and Ihoghama (on wrestling team at Oregon State)
-Three-time state wrestling champ … Also lettered one season in track.
-Did not see game action in his first year in the program and redshirted
-Saw action in all 13 games as a reserve in 2017 and was credited with 15 tackles, 5.5 for loss, a sack, a forced fumble, and a fumble recovery for a TD
– Saw action in 11 games and was a starter in the final eight games as a sophomore and recorded 29 total tackles (20 solo), six TFLs, three sacks, two pass deflections, and a forced fumble
-Saw action as a starter in all 12 games as a junior, notching 46 total stops (25 solo), ten TFLs, 3.5 sacks, and a pass breakup
-Started all seven games as a senior, racking up 30 total tackles (12 solo), six TFLs, four sacks, and a pass deflection

Osa Odighizuwa from UCLA is an interesting film evaluation from a traits vs tape standpoint. From a tape perspective, Osa is great to watch for his penetrating style he plays with, showing great pursuit of the football and playing with the leverage you like to see from a player of his stature to be a problem along the defensive line. On the other hand, his traits and measurables depict a tweener that is too small to be an interior defender or too big to be a traditional edge rusher. When analyzing the tape, you definitely see the areas where Odighizuwa is and can be successful at the next level. Like mentioned previously, he is great at shooting games and being fairly quick off of the snap. A great example here where Odighizuwa fires through the A-gap off the snap nice and low, flying into the backfield and getting the tackle for loss on the key 4th down stop.

His leverage for being a stocky defender and leg drive can be difficult for longer offensive linemen to handle. Here against Cincinnati, Odighizuwa gets underneath the tackle’s outside shoulder, ripping through effectively and taking down the back in the backfield for a loss.

On this play against Stanford, he shows his quickness and agility off the snap, crossing the face of the LG and ripping through with his right hand, running his legs through the block and right into the lap of the passer for the sack.

Odighizuwa’s leg drive and strength are no joke, as when he plays with good pad level, he can run back even the biggest blockers and collapse the pocket. Here against USC, we see Odighizuwa run the RG right into the face of #9 Kedon Slovis, forcing him throw the ball early and results in an incompletion.

If you want a close-up example of Odighizuwa’s power and strength to anchor, watch this rep from the Senior Bowl against Creed Humphrey who is considered possibly the best center prospect in the draft. Odighizuwa is quick off the ball, sits his hips down, and strikes his outside shoulder, uprooting Humphrey off of the ground. During film study, I have hardly ever seen Humphrey moved off of his spot, but Odighizuwa shows out on this rep and lifts him off of the ground.

As a pass rusher, Odighizuwa is great on the stunt and twist game with other defenders due to his movement skills and effort in pursuit. Here against Colorado, Odighizuwa starts head-up on the center, but then loops around the other defensive tackle on the snap, running into the guard who tries to pick him up, but manages to shed him as he collapses the pocket and gets in on the QB takedown.

As Alex Kozora highlighted during Senior Bowl week, Odighizuwa also has a nice spin move that he uses to take advantage of unsuspecting guards and centers. Here on this rep, he gets the guard to commit and lunge forward as he rushes to the blocker’s outside shoulder, quickly showing him his shoulder and spinning to the inside where there is a wide lane straight to the QB for the easy sack.

There are some concerns when taking into consideration Odighizuwa’s size, or lack thereof, as a negative. While he has great leg drive and plays with leverage, he doesn’t have a ton of sand in the pants to walk back blockers who sit in and anchor against him that are flat out bigger and stronger. On this rep, Creed Humphrey gets the better of him, sitting in and getting hands inside his chest, neutralizing the rush entirely.

He can struggle against more athletic blockers that can move with him and recognize when he is coming with the bull rush. The lack of having a developed counter move as well as refined hand technique can cause plenty of Odighizuwa’s rush reps to result in him trying to push the blocker back but failing to disengage and stack and shed the block. Here he shifts out against #75 Alijah Vera-Tucker but fails to get the corner on the speed rush and allows his hands on Odighizuwa’s chest, resulting in him getting locked down on the quick pass play and disrupting the pass.

Overall, it can be difficult for players with the same frame of Odighizuwa to transition to the league where blockers are bigger, stronger, and more athletic. These linemen will be able to anchor in better against the bull rush and can handle spin moves on the inside better than unsuspecting collegiate linemen. However, Odighizuwa does have the twitch, motor, and leverage to still be a disruptive force at the next level. He could either stand to add some more mass to man the middle better or choose to lean up and go outside more as a traditional 4-3 defensive end. His best work comes on the interior though and utilized as a sub package rusher on passing downs or occasionally in run defense to spell other defensive linemen may be his nitch to get on a team initially while trying to work for a bigger role. When watching him, Dre’Mont Jones of the Broncos comes to mind as an athletic, yet undersized player on the interior that has been disruptive his first two seasons for the team.

Pittsburgh is to have said to have shown some interest in Odighizuwa, having met with Mike Tomlin. He wouldn’t be a traditional fit in the Steelers’ scheme, but he could definitely be a situational pass rusher on sub packages to give Tuitt and Heyward a breather and be a good compliment to Alualu while making sure Henry Mondeaux doesn’t see the field. This may be a stretch, as the team has more pressing needs and were successful in bringing Alualu back, but should he be there sometime on Day Three where value presents itself, this could be a pick the team looks into making to bolster its depth in the trenches.