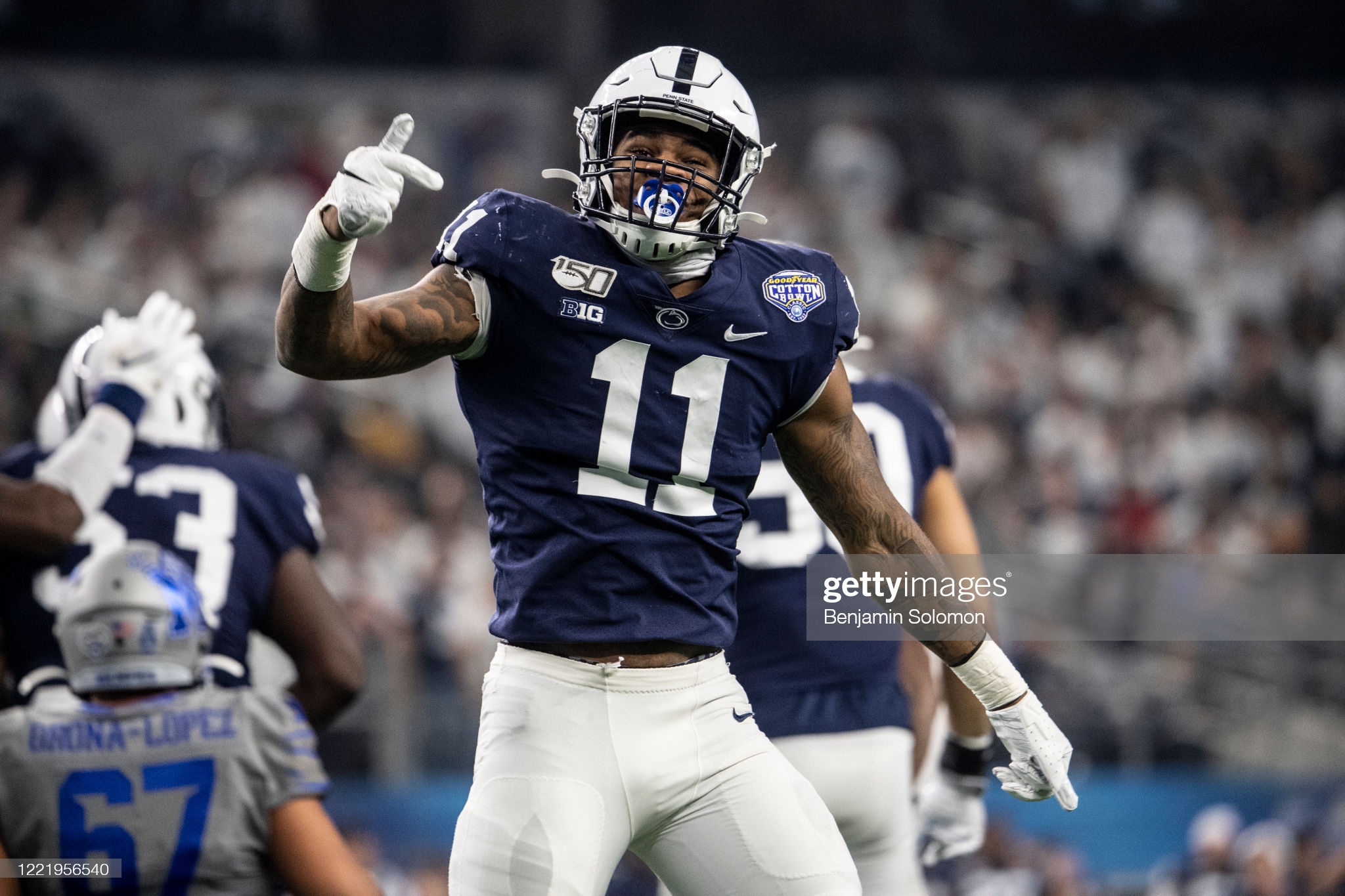 -Great looking prospect in terms of size and length for an off-ball linebacker
-Well-built frame with long arms and solid muscle definition for his length
-Great athlete in terms of speed (4.39 40) and burst from the snap of the football (34” vert)
-Showcased some versatility by primarily playing as an off-ball linebacker for Penn St while lining up occasionally on the edge to rush the passer and split out in the nickel in spread situations
-Has the ability to play sideline-to-sideline at the 2nd level and play chase with good angles of pursuit
-Wreaks havoc near the LOS and has shown to be a disruptive force in the backfield with his TFL and sacks production as a full-time starter
-Effective blitzer up the middle and will relentlessly pursue the QB
-Able to take on blocks well for a 2nd-level defender and will beat backs and TEs with regularly
-Opportunistic playmaker who looks for the strip and has great success at forcing the turnover
-Comes downhill with authority, landing big hits on ball carriers
-Shoots his hips on contact and is an explosive hitter, playing the role of a hammer rather than nail
-Can work through trash well near the LOS when coming downhill
-Does a great job of keeping his shoulders square to the LOS when going through his reads and working down the line
-Can work through contact when in pursuit by playing with good leverage and burst through blockers
-Effective at playing the middle of the field in zone coverage and breaking on the ball when thrown or coming in pursuit

-Tends to read the QB often when sent on the blitz which can delay his pursuit
-Can struggle getting off blocks if initial stack-and-shed move fails
-Often wins on twists and with sheer speed through a gap rather than winning with a pass rush repertoire
-Not natural playing the ball in the air as a coverage defender with shaky hands
-Doesn’t have the quick twitch in pass coverage to react to breaking route by receivers, leading to more separation than desired

-Junior prospect from Harrisburg, Pennsylvania
-Consensus top-10 prospect in the recruiting class of 2017 as the #1 off-ball linebacker prospect
-Also played basketball in high school
-Was a DE prospect out of high school but transitioned to an off-ball backer role in college
-Only started one game as a true freshman, but still lead the team with 83 tackles (47 solo), four TFLs, 1.5 sacks, and a pair of forced fumbles
-Played in all 13 games with 12 starts as a sophomore, filling up the stat sheet to the tune of 109 total tackles (52 solo), 14 TFLs, five sacks, five pass deflections, four forced fumbles, and a fumble recovery
-Announced on Aug. 6, 2020, that he was forgoing his remaining eligibility at Penn State to focus on training for the 2021 NFL Draft
-Freshman All-American in 2018, honorable-mention All-Big Ten in 2018, Consensus All-American in 2019, Butkus-Fitzgerald Linebacker of the Year in the Big Ten in 2019, All-Big Ten first team in 2019
-Was accused in 2018 for hazing and harassing a former teammate
-Case was filed in October 2020 in U.S. Middle District Court, but Parsons was not listed as a defendant
-Admitted his mistake at his Pro Day, citing that he was young and made a mistake and has since moved o

As one of the top recruits in the nation, Micah Parsons had the pick of the litter when deciding where to play in college. He decided to stay in-state and attend State College in Pennsylvania. The decision proved to be a good one, as the combination of the coaching and strength and conditioning staff for the Nittnay Lions capitalized on the talent to make Parsons a top-end player in the nation in only two seasons. He saw ample playing time as a true freshman, only starting 1 game, but still lead the team in tackles. Parsons really broke out as a sophomore, getting his tackle numbers in the triple digits while racking up plenty of sacks and force fumbles. When Parsons is allowed to run free unblocked from sideline-to-sideline at the second level, there may not be a better option. He has tremendous range in pursuit with the length and burst to cover a large amount of ground quickly. He talks greats angles of pursuit to the ball and doesn’t waste any time getting from point-A to point-B. On this play against Michigan, Parsons bites on the fake handoff to the runner up the middle, but realizes the QB kept the ball, turning toward the sideline and hitting the jets in pursuit of #2 Shae Patterson, chasing him down and limiting to a minimal gain on the play.

He is extremely dynamic as a downhill thumper, wreaking havoc in the backfield as a run defender and also as a blitzer from up the middle and on the edge. On this play against Memphis in the Cotton Bowl, Parsons fires downhill even before the ball is snapped, shooting through the gap reading the handoff but plays the WR reverse perfectly, running to his shoulder and throwing him to the turf like a rag doll for a big loss.

He understands body positioning and can work down the line with his shoulders square and avoid trash in front of him to maintain pursuit. An example here against Ohio St. where parsons has his eyes in the backfield reading the option play where #1 Justin Fields keeps the ball and tries to run to the outside. However, Parsons is ready, chasing down the QB on the run after playing square to the LOS, taking a great angle of pursuit to the ball and knocking Fields out of bounds for a loss.

Parsons was able to line up on the edge as well as in the box for the Penn St. defense. Not only was he an effective pass rusher on the outside, but he also was a solid run defender when rolled up on the line. Here against Minnesota, Parsons sneaks inside on TE #42 Ko Kieft and makes a play on the back in the backfield. I happened to play against Kieft a lot in high school, and his size and strength was something our team often had troubles handling. Despite adding 30lb since then, he is no match for Parsons and his strength and movement skills.

Being a former defensive end in high school, Parsons has a good feel of rushing the passer. When he is in the box and is sent on the blitz, he is no match for backs who have to pick him up in pass protection. Here on this play against Memphis, Parsons comes on the twist with the outside linebacker, getting a free path to the QB where he closes ground quickly, securing the sack and goes for the punch on the football, knocking it free into the hands of his teammate which he returns to the house.

He has great snap anticipation against both the run and pass and can sneak through small gaps extremely well given his size. Here in the same game, Parsons times the snap perfectly, getting into the backfield before anyone can realize it, making the passer bail out to the right. Parsons runs him down, takes him to the turf, and again knocks out the ball in the process.

In pass coverage, Parsons holds his own manning down the middle of the field when dropping into the zone. He occasionally gets a good break on the ball with his awareness, but doesn’t have the natural hand-eye coordination to come down with the INT. Here against Michigan St., Parson does a good job dropping into the flat from the edge after reading pass, getting his hands up in the passing lane to knock down the ball intended for the TE. He fails to corral the ball for the turnover, but he still gets the deflection nonetheless.

He isn’t the most fluid when in man coverage due to his newness to the position, as he primarily played as a defensive end as a prep athlete.  That can be seen here as Parsons tries to move in a backpedal, moving upright and labored as he tries to drop into coverage, giving a large cushion to the receiver split out to the right in zone coverage. He is late to open up and make a play on the ball in the air, but luckily the pass was off-target and ended up being an incompletion.

Parsons also can struggle at times getting off of blocks when speed and initial move fails when running to the football. He will beat backs and TEs with regularity but may get engulfed at times vs stronger offensive linemen when he doesn’t get a free release. Here is a quick example against Michigan St. where Parson is in position against the run, but is indecisive on filling the A-gap, jumping outside and allowing th guard to get on him and move him back from the ball carrier.

Overall, Parsons may not be the most polished in pass coverage or consistently be in the right position when trying to get off of blocks against the run, but his ability as a run defender, a pass rusher, and a size/speed athletic specimen negate those concerns as one of the most talented defensive players in this draft class. He has room to grow in coverage with more experience, having only played the position for two full seasons in Happy Valley and has already showed good instincts when asked to play in zone. His upside as an athletic playmaker as a pass rusher and ability to run sideline-to-sideline as a 2nd-level enforcer are invaluable to NFL defenses as seen by with the Buccaneers duo did in the Super Bowl. In terms of player comparisons, Jaylon Smith of the Cowboys is a favorable comparison as a long, uber-athletic run-and-chase linebacker that excels when asked to rush the passer but can also struggle when asked to run with receivers and tight ends in man coverage.

Parsons should expect to come in Day 1 as a MIKE or SAM backer and earn starters snaps relatively early, and eventually push to be up there in terms of league leaders in tackles sooner rather than later. The Steelers were at his Pro Day with both Tomlin and Colbert in attendance, praising his athleticism and had conversations with him while there. With the recent loss of Vince Williams, the prospect of pairing Parsons at the BUCK with Devin Bush at the MACK in the middle would be extremely tantalizing for a dynamic duo for years to come. While it may be unlikely for Parsons to be there when Pittsburgh makes their selection at #24, his previous off-field concerns and decision to opt out of 2020 could potentially cause a slide. Pittsburgh would have to do their research to be fine with the person, but should he be on the board, it would be extremely difficult to pass on a player of his caliber.