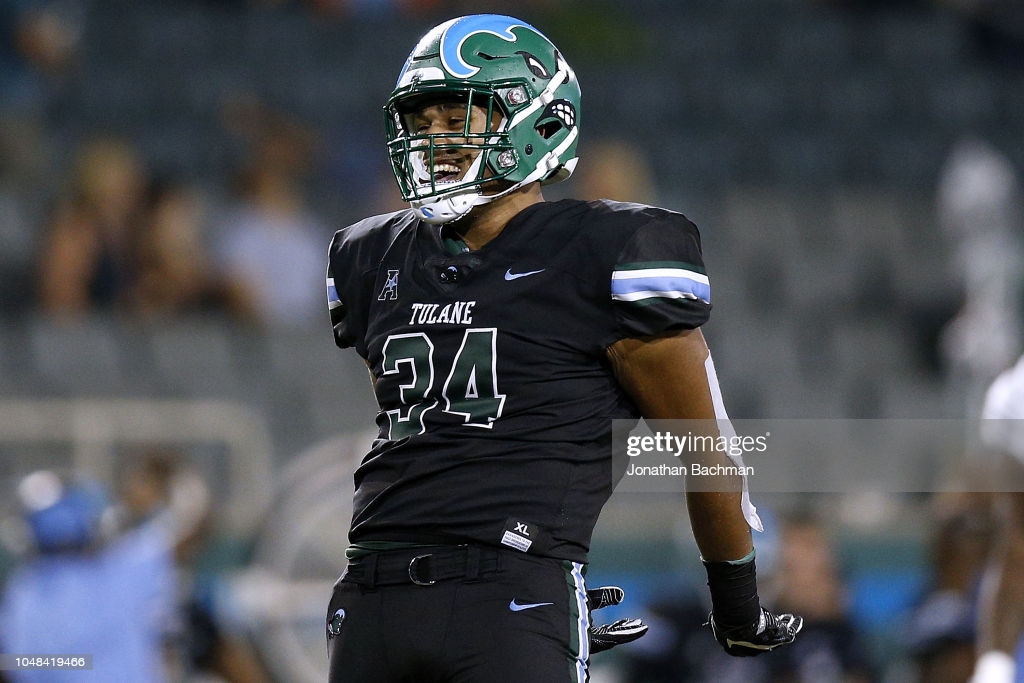 Tulane had a couple of solid bookends on their defense this year with Cam Sample and Patrick Johnson. While Sample may fit better in an even front defense Johnson has the size of an outside linebacker. He played on both sides of the defense primarily in a two point stance.

Against the pass, he has good quickness at the snap especially in his first two steps and does a solid job of mixes up his pass rushes.  He’ll use chops, rips, stabs and spins as he goes up the outside or countering to inside.  He has good success on his moves to the inside especially with rips and spins and with stabs. He has solid agility as the looper on stunts and has good mental processing on screens.  He was used in Zone and some Man coverage on running backs.  In Zone his drops were primarily in the curl/flat zone and he was solid reading the QB and moving with him. The Man coverage reps were primarily in the short area but he did turn and run with RB’s on some wheel routes.

At Houston, from the right side he will loop inside but reads the OL and RB to identify the screen and put himself in place to make a play.

Vs SMU, from the right side he will use a spin move to the inside to force the QB out of the pocket and then good COD to chase him down for the sack.

At Tulsa, from the right edge he’ll start up field and uses a heavy punch with his left hand to knock the left tackle off balance to get the pressure.

At Tulsa, from the right side here is a short drop into coverage. He reads the QBs eyes and shuffles with him and does a solid job to get in on the play.

Against the run, on runs his way he has good hand placement, pad level and solid play strength to set the edge to force runs inside. He shows good aggressiveness on pulling lineman getting low to take out their legs and clog the backfield. From the backside he shows solid lateral agility to slide from the backside to close cutback lanes and good pursuit on runs away from him to chase down behind the line of scrimmage. He showed enough snap quickness to duck into gaps to clog lanes when playing a one gap scheme. When he gets the opportunity he packs a punch when he tackles.

Vs SMU from the right side he we show his chase from the backside and puts a big hit on the running back.

Vs Memphis, he’s on the left edge and will chase down the line of scrimmage through traffic to make the tackle.

Vs Memphis, he’s on the left edge in goal line defense the uses good pad level, hand placement and strength to stand up the TE and clog the running lane.

Vs Memphis, he will set the edge on the right side versus the TE to stuff the run coming his way.

His hand placement when rushing the passer is inconsistent and leads to some easy reps for the tackles that can get their hands on him. He needs to improve on knocking the hands of the blocker away.  Marginal bend around the edge to flatten to the quarterback and his third step in his rush up field seems to decelerate a bit. Needs to improve getting off of blocks more quickly as there were plenty of reps he didn’t get off of TE blocks. Mental processing is adequate reading the mesh point and he’ll lose sight of the ball and chase the fake. His pursuit downfield is adequate not chasing at full speed often.

Vs SMU, on the right edge he has a nice base and is solid getting off the block to make the tackle. This is against a TE and you’d want him to get off the block sooner.

Overall, Johnson has good snap quickness, a good punch, some experience in coverage and has success as a pass rusher especially in inside moves.  He can set the edge, chase from the backside and has good hit power in his tackles.  Areas to improve include his use of hands when rushing the passer, his timing and efficiency when shedding blocks and mental processing when reading the mesh point.

Johnson is a developmental prospect.  There is potential in his pass rush to become more effective and he has a good understanding of what he needs to do against the run.  I think he can be the OLB4 and special teamer in year one that with improvement can move up the depth chart.