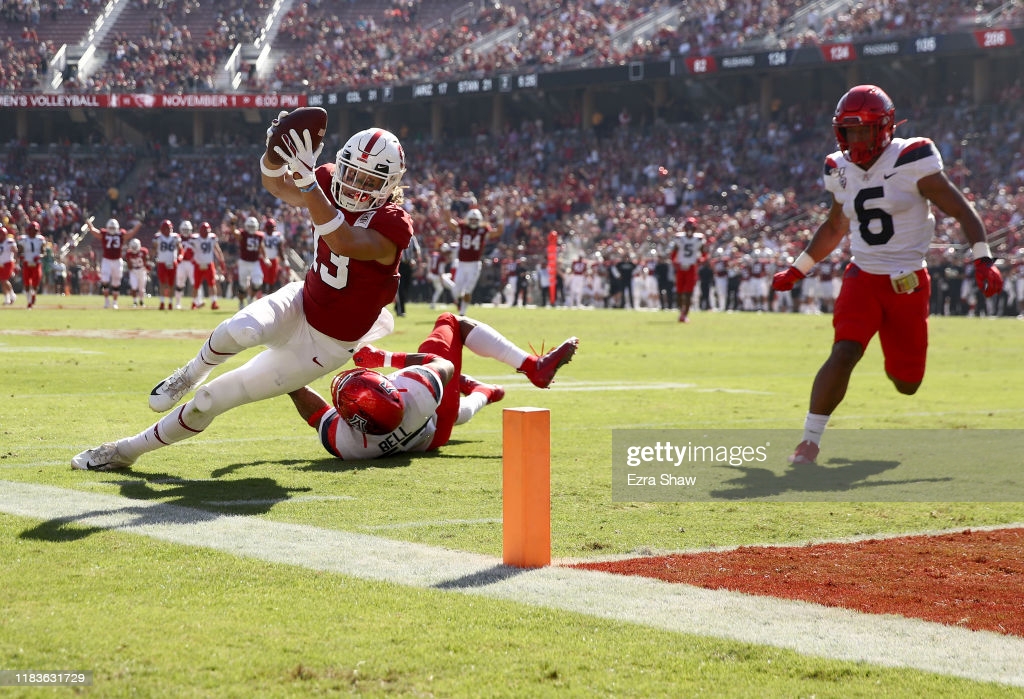 -Fast, physical receiver that works well vertically
-Good overall athlete for the position that projects as a crafty route runner
-Size and speed appears unmatched in the draft class at WR
-Twitched up receiver with lighting quick get-off
-Good ball skills for the position and is exceptional tracking the ball in the air
-Can line up as X, Z or slot receiver
-Powerful runner after the catch

-Struggled to consistently catch the football; battled concentration issues
-Does not create a ton of separation on routes despite blazing speed
-Needs to refine overall route tree and hone in on craft in that area
-Lacks overall experience and started just four career games
-Route tree really only consists of vertical routes
-Testing numbers and tape don’t quite match up right now

If a team is in the market in the 2021 NFL Draft for a raw, physical receiver that could serve as a very good developmental piece over the next few years, Stanford junior Simi Fehoko is that guy this spring.

Though Fehoko started just four games at Stanford in three seasons, he was a consistent vertical threat for the Cardinal, thriving on contested catches and creating some big plays after the catch.

Fehoko struggles to separate against defensive backs, but he thrives in contested-catch situations.

Here against Washington in 2020, Fehoko does well to get vertical quickly off the line against the Huskies’ corner. He has adequate functional strength and won’t be bumped off his routes or his timing.

One thing I really like about Fehoko in contested catch situations is his ability to use his hands and clear just enough room to make a play. Here is his breakout game against UCLA, Fehoko consistently made plays in tight.

On this fade route in overtime, Fehoko was able to get a clean release and use his hands to create just enough separation, flashing hands late in tight to make the play.

When not working deep, Fehoko thrives on crossing routes where he can use space and angles to his advantage. Once he has the football in his hands, he won’t provide much wiggle in space, but he will lower his shoulder and dish out punishment.

Against UCLA, Fehoko does a good job working open on the crossing route, catching the ball in stride and lowering the boom on the Bruin corner near the pylon.

Though I do believe Fehoko needs to hone in on his technique as a route runner, he flashed some suddenness in 2020.

On the road against Oregon in 2020, Fehoko flashed impressive suddenness in short areas, shifting from outside back inside, blowing past the Ducks’ corner for the explosive play downfield.

Fehoko does have impressive long speed, but he really struggles to create that separation most burners do.

However, Fehoko is great in contested-catch situations and does a great job tracking the football in the air.

This route at Oregon State showcased everything Fehoko is and can do as a vertical threat.

He does a fantastic job tracking this football and making a play through two defenders for the score, flashing strong hands late in the play.

While he has impressive testing numbers, the limited experience and tape doesn’t quite match up in pads. He has all the tools develop into a solid X or Z at the next level, but he is going to have to land with the right team that can afford to be patient with him for at least two years as he develops a route tree and fully learns the position.

Despite the limited experience, production and route tree, this is a guy worth taking a shot on in the fifth round. It’s hard to find those type of testing numbers with that size and length on Day 3.