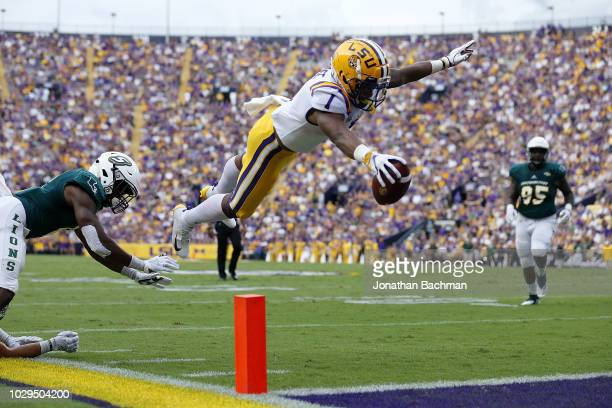 – Average length but possesses a well-built frame
– Played mainly on the boundary for the Tigers on both sides of the formation, lining up occasionally in the slot
– Has above average speed (4.38 40), but is extremely explosive as an athlete for the position (41” vert, 132” broad)
– Builds up to top speed quickly off the line and when he sees open grass
– Leaping ability is on full display in contested catch situations when he attacks the ball at its highest point
– Jump ball specialist in the red zone with the size, strength and explosiveness to bully defenders at the catch point
– Able to play through contact downfield and and hand fight with corners to gain leverage
– Shows good body control when in the air, showing his ability to adjust to the pass, and is confident in his ability to come down with the catch
– Extremely strong hands that suck the ball right in once it arrives
– Able to come down with the back-shoulder fade and have the awareness to stay in-bounds along the sideline
– Has the speed and strength to be a threat after the catch to pick up extra yardage
– Thickly-built frame makes it difficult to bring him down in the open field or press him at the LOS
– Dangerous when utilized in the slot and allowed to run in-between zones of linebackers and safeties over the middle
– Able to burst ahead at the last second in contested situations to gain position on the ball in the air
– Mainly wins with physicality at the catch point
– Able to take quick jab steps at defenders when running his route in order to get them going one way so he can separate
– Can adjust on broken plays and find the open spot in coverage to give his QB a target
– Has only average speed and may struggle to separate from higher quality press man corners at the next level

– Greatly benefited from LSU’s passing scheme to give him advantageous match-ups with route concepts that got him easy separation (rub routes, wheels/slot fades, etc)
– Several of his big splash plays came on busted coverages where he was running wide open
– Benefitted on timing routes in the offense rather than creating separation on his own
– Routes seem slow and unrefined for a player of his caliber
– Doesn’t create large amounts of separation with his route running
– Can struggle with length and physicality in terms of hand fighting to get off press coverage
– Has some focus drops that show up more than you’d like to see

– Junior prospect from Harvey, Louisiana
– Was a track athlete in high school, winning the state long jump his junior year
– Saw action in 13 games as a true freshman, including seven starts, recording 23 receptions for 313 yards and three scores
– Completely exploded his sophomore season, racking up 1,780 yards and tallying 20 TDs on 84 catches
– Decided to opt out of the 2020 season and train for the NFL Draft
– Biletnikoff Award Winner in 2019, 2019 first team All-American, 2019 All-SEC first team
– Currently enrolled in LSU’s Project Graduation degree program in hopes of finishing his degree

Ja’Marr Chase only needed two seasons at LSU to become a household name and a favorite to become possibly the first wide receiver drafted in 2021. He completely exploded his sophomore season, winning honors as the top receiver in college football and breaking nearly every receiving record in LSU history. The junior bypassed his third season for safety reasons and declared for the Draft.

Chase doesn’t wow you in terms of size or straight-line speed, but he is an athlete with the explosiveness and burst to be dangerous in the air or when accelerating in the open field. Here against Vanderbilt, Chase lines up on the right side in the slot and gets the free release off of the line against zone coverage. He catches the ball in the middle of the field and shakes off the diving tackler, working to the sideline and gradually pulling away from the defender in pursuit as he runs up the sideline for the score.

He is a physical playmaker with the strength to win contested catches routinely with his ability to play through contact. Here against Alabama and #7 Trevon Diggs, Chase works up the sideline, hand fighting with Diggs to get position on the ball and turning back to the pass just behind him, watching Diggs whiff and fall as Chase reels in the grab for the touchdown.

He also shows of his strength when hand fighting downfield for separation or when running after the catch, battling to pick up extra yardage. On this play against Ole Miss, Chase catches the ball over the middle with the defender draped over him trying to contest the pass, and then shakes out of the diving tackle attempt, accelerating upfield and later cutting back to the sideline as he takes it all the way for the long catch and run TD.

A former state long jump champ in high school, Chase has incredible leaping ability, being able to elevate high in the air in the red zone or along the sideline to attack the ball at its highest point. On this play against the Commodores, Chase runs up the sideline and gets high up in the air, catches the ball over the defender’s head, bringing it into the breadbasket for the big gain.

Chase also has vice grips for hands, snatching the ball out of the air or coming down with the catch when hit. Here against Texas, Chase gets the outside release on the go route, getting a step on the corner, but comes back to the ball that is slightly underthrown, leaping up and snagging the ball at the highpoint over top of the defender for the catch.

Chase was utilized both inside and outside for the Tigers, and while he ran routes in all quadrants of the field, he did most of his damage when used as a deep threat. Here on this play against the Bulldogs, Chase lines up in the slot and gets inside leverage on the vertical route. Chase goes up and snags the ball and its apex with the defender contesting, holding onto the ball for the score.

While Chase has his strengths as an athlete, his top speed is only average as he relies more on burst to create separation. Chase also didn’t seem to show great qualities as a route runner, appearing to be rather lackadaisical in his cuts and dropping in and out of his breaks. On this rep vs. the Crimson Tide, you see Chase lined up against #2 Patrick Surtain. While Chase had his way with Trevon Diggs in the game, Surtain, the better press man corner, kept Chase in-check when tasked to cover him.

For most of their reps facing each other, Chase was unable to get off of the press coverage and separate with crisp routes at the break point from higher-caliber defenders. Diggs was drafted in the third round this past year and often got burned for the Cowboys, suggesting he isn’t the same high-caliber cover man that Surtain is projected to be. Between facing more skilled press man corners that won’t get bullied at the next level and also needing route refinement, Chase may have a tougher time getting open and winning downfield shots against better competition.

He definitely benefited some being a product of the LSU system which created advantageous positions for him to win easy matchups via rub routes, slot fades, and plays where he saw busted coverage. Take for example this busted coverage against Florida, where #22 Clyde Edwards-Helaire runs the rub/pick route in between the two Gator defenders, freeing up Chase for the easy pitch-and-catch TD up the sideline. This is not a knock on Chase’s ability, rather recognizing plenty of his long splash plays came from the system rather than him actually working to get open.

While Chase ran an impressive time at his Pro Day, I’m not so sure we can believe a lot of the times that are coming out for this year’s draft prospect. Chase has decent speed, but he doesn’t appear to be a 4.3 guy on tape. He normally has to win on combative catches, as he won’t be running away from a lot of defenders. On this play against Mississippi State, Chase tries to get the outside release on #3 Cam Dantzler, but is unable to stack him and gets boxed out by the defender when the ball arrives, Dantzler nearly making the INT. Dantzler tested in the 4.6 range at the Combine last year, and Chase struggled to separate from him all game when they matched up with one another.

Overall, Chase has an impressive resume for only two seasons, and has the physical tools to be a gladiator over the middle and in the red zone at the next level. The system he played in amplified production, and the lack of refinement as a route runner does give reason for concern, though, about how well he will adjust to life in the NFL.

Chase needs to go to a team with a veteran presence in the locker room and develop the tricks of the trade whilst still being a physical presence for an offense that will use him vertically and near the red zone. His best bet is to have a long career in the league as a consistent chain mover and contested catch savant. He will be a solid starter for a lot of teams and be a very productive pro, but I have doubts that he will continue to dominate the position at the next level compared to what he did in college.

After much research and comparing player tape and measurables, I found Chase’s closest comp to be Justin Blackmon. I am not here saying that Chase is going to be the bust Blackmon was. However, when we look at Blackmon coming out as this dominate force at the college level, a physical presence with nearly identical size, athleticism, and play style, and also the fact that Blackmon was drafted #4 overall and Chase figures to be a top 10 lock as well, the similarities between the two are eerie, to put it lightly.

I ask you to go watch some of Blackmon coming out of Oklahoma State and in his first season with the Jaguars, and tell me you don’t see a resemblance in play.

DISCLAIMER: I am not suggesting that Ja’Marr Chase is in play for the Pittsburgh Steelers at #24. He should be long off of the board by that time, and the need doesn’t match up at the time given the receivers on the roster. I merely want to point out his strengths and weaknesses as a football player and acknowledge that he is set up to be a good pro in the league. However, with strong speculation that Joe Burrow and Chase could reunite in Cincinnati come the time the Bengals pick at #5 overall on April 29, yinz will have the scouting report on Chase and what to expect from the possible division rival over the next few years.