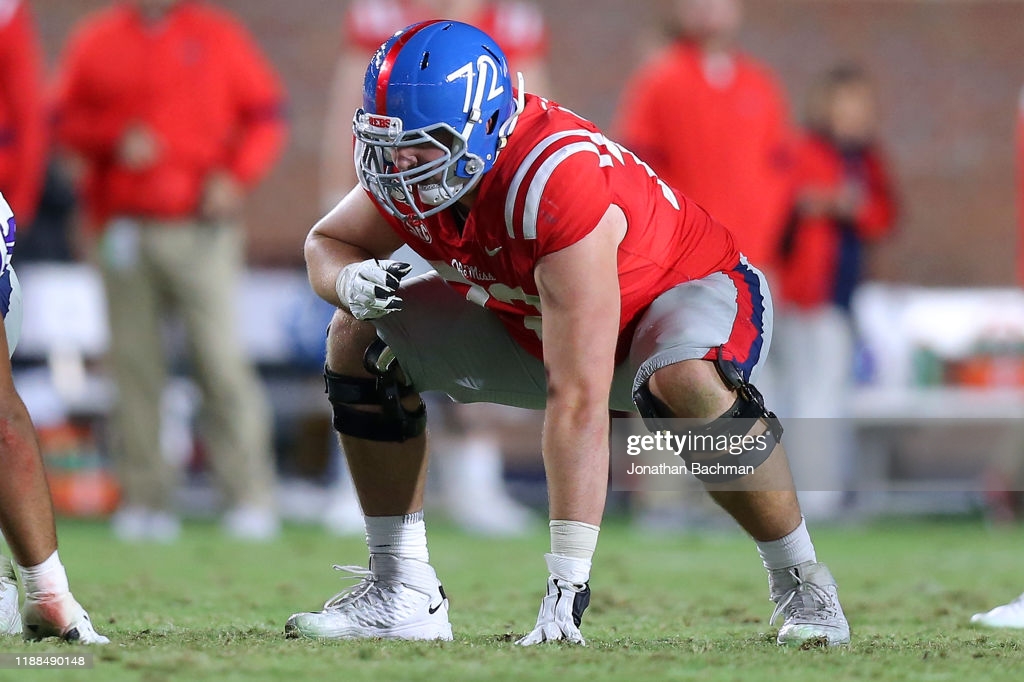 – Lacks lateral speed to handle athletic edge rushers
– Plays with too high of a base, allowing defenders to get underneath pads
– Overextends when his hands trigger slow to block his man
– Struggles with re-positioning hands against defenders with longer reach
– Falls off of blocks when trying to reach defenders
– Needs to bring better pop with hands at point of attack

One of the more experienced, versatile lineman in this 2021 class is Ole Miss Right Tackle and Guard, Royce Newman. He is unique because he has played over 800 snaps at both guard and tackle, meaning if a team is in a pinch and needs someone to be a spot starter at tackle, Newman is your guy.

Newman shows athleticism on his tape with how smoothly he makes backside scoop blocks. Against Florida, Newman is able to get underneath the interior defensive lineman and wall him off from making the play on the backside. Nice display of footwork as well.

Against Auburn, Newman does a nice job positioning his body to root out the edge defender and create a nice crease in between him and the guard. One of his best base blocking reps on film, engages, drives his feet, keeps a solid base and finishes the block.

Active hands and quick footwork help Newman stay in front of his man and be ready for counter moves. Against Vanderbilt, Newman keeps a solid base, keeps his hands inside of the frame and mirrors what his defender is doing. A clean pass rep that allows the play to develop further.

Using his athleticism and getting to the second level consistently to cut off linebackers shows why his game may translate better as a guard in the NFL. Newman beats Alabama linebacker Dylan Moses to the spot and keeps him from making the play. Really athletic showcase of his skills.

There are concerns with how he struggles with quick, twitchy athletes in the passing game. On the play below against Florida, Newman lunges and his feet are outside of his frame, allowing for the defender to use an inside spin move to get to the quarterback. Has to be better with staying square and being patient and powerful with his initial punch.

Again, Newman overextends at the point of attack and nearly stumbles for lack of patience and lack of length on the perimeter. Would like to see him clean up his hand placement as well.

The Illinois native excels on down blocks and washing his man out of the play. During this play below in his game against Arkansas, Newman does a great job getting into the defenders pads and taking him for a ride. He finished the play with a pancake, kept his hands in frame and drove through his man to the ground.

Royce Newman is not a day one starter in the NFL. He needs to clean up the issues with the lower half of his body being stiff, inconsistencies with hand placement and making an initial pop with his hands. Although he played 2020 as a tackle, the size profile and measurables make him a better prospect as a guard. Ultimately, Newman could be a depth piece for a Steelers offensive line who will be re-tooled this season.

Games Watched: vs. Florida,  vs. Alabama, vs. Auburn, at Vandy, at Arkansas