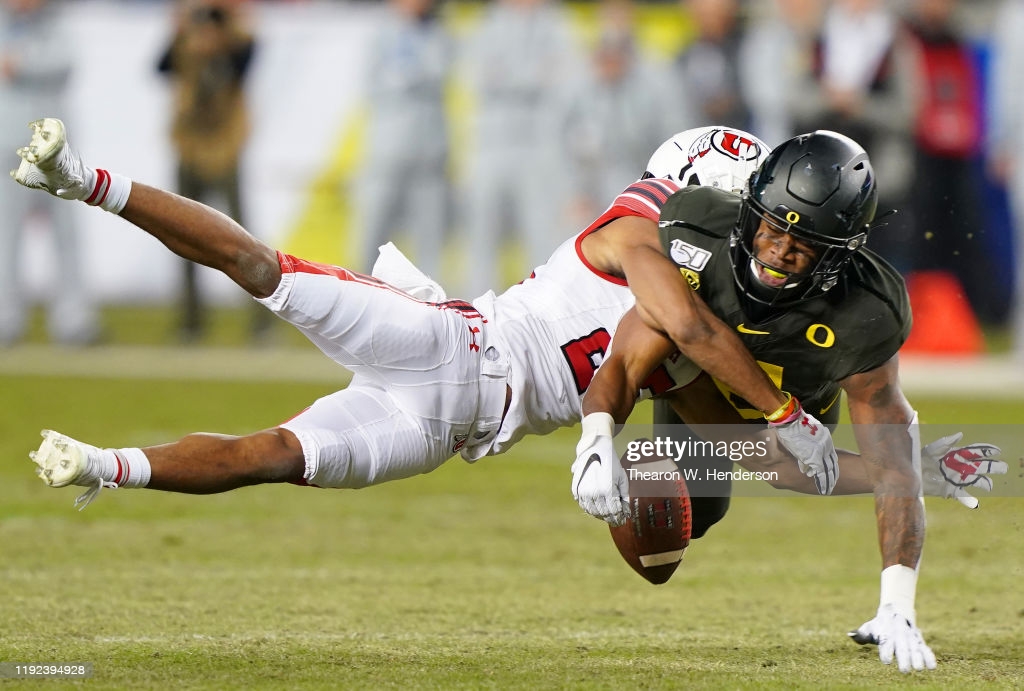 From now until the 2021 NFL Draft takes place, we hope to showcase as many prospects as possible, and examine both their strengths and weaknesses. Most of these profiles will feature individuals that the Pittsburgh Steelers are likely to have an interest in, while a few others will be top-ranked players. If there is a player you would like us to analyze, let us know in the comments below.

Thus far in the 2021 NFL Draft process, I have spent a majority of my efforts profiling this year’s deep cornerback class.  Nonetheless, while studying film on Oregon’s Thomas Graham Jr. back in February, I couldn’t help but notice the impact of his teammate, a versatile defensive back with experience at safety as well as both slot and boundary cornerback: Jevon Holland.  Holland’s playmaking ability speaks for itself, with nine combined interceptions in his two seasons of collegiate play. But his relentless pursuit of the football and tackling ability make him a top-level slot prospect as he transitions to the NFL.

In studying Holland’s film, his natural playmaking ability and ball skills at the catch point jump off the tape immediately, as evidenced by his gaudy interception numbers.  In the first clip, from the 2019 season opener against Auburn, Holland, aligned in off coverage over the slot, displays great patience off the snap, waiting for the receiver to declare vertically before closing to the near hip, turning into the receiver, and attacking the underthrown pass at its apex to secure a timely interception.  On the next rep against Stanford, Holland, tasked with a seam-curl-flat(scf) assignment in a Cover 3 zone, deploys a beautifully executed speed turn to stay in phase with the receiver before undercutting the route, and once again attacking the ball at its apex for an athletic pick.

While the ball skills are evident, Holland’s ability to consistently stay patient in off coverage allows him to routinely compete on intermediate and shallow route concepts in man coverage.  Aligned to the boundary against California, Holland opts to play catch technique at a six-yard depth, giving no ground off the snap before disrupting the receiver’s timing and path with a smooth two-hand jam at the top of the route, and staying in phase to deflect a pass which would wind up in the hands of his teammate.

Despite his natural ball hawking skills and physicality, Holland’s consistent effort and elite awareness allow him to disrupt plays at all levels of the field.  In the 2019 Pac-12 championship game against Utah, Holland, aligned in catch man coverage over the slot, blankets his defender across the middle of the field, keeping his eyes peeled to search for work elsewhere.  With his receiver taking him right into the throwing window on the crossing routes, Holland sacrifices his body, diving and arriving to play through the receiver’s hands at the catch point, preventing a crucial first down in the process.

Though few slot prospects enter the NFL ready to contribute as box defenders, Holland is a clear exception, serving as an aggressive and effective tackler when able to stay clean.  Against Auburn, serving as the overhang defender to a tight wing set, Holland shuffles to follow the H-back before closing space rapidly and shooting low to corral the back before he could pass the line of scrimmage.  Later in the season, against the California Golden Bears, aligned as the overhang defender to a nub tight end set, Holland inserts off the edge untouched, flattening down the line to halt the back after a miniscule gain.

Although it’s well known that Coach Tomlin has strong reservations against using defensive players as return men, Holland’s open field ability, helping him finish Top 10 in both net punt return yards and average per return in 2019, is certainly nothing to scoff at.  In the season opener against Auburn, Holland gashed the Tigers with returns of 21 and 29 yards, along with the 81-yarder pictured below, showing his dynamic open field ability that could help most teams in the weekly hidden yardage battle.

While Holland stands alongside Elijah Molden among the best open field tacklers at the slot position, similarly to his counterpart, he can struggle to get off blocks once engaged, particularly against larger framed players in the box.  Serving as the overhang defender to a tight wing set against Auburn, Holland flows laterally before being caught off guard by a crack block from the wide receiver, allowing himself to be sealed off to the inside, and creating a sizable crease for the back to exploit for an explosive run.

Although his struggles in pass coverage are largely fixable issues, Holland will get caught flat-footed in his transitions at times, an area which he will need to become more consistent to disguise his lack of top-end hip mobility.  In the teams 2019 opener against Auburn, arguably Holland’s best career game, he gets caught playing with high pad level and flat feet against the post corner route, allowing just enough vertical separation for Bo Nix to exploit the coverage for an explosive completion.

Overall, Holland enters the 2021 Draft standing alongside Washington’s Elijah Molden as one of the elite slot prospects in this year’s class.  While his skill set would be maximized in a scheme which relies heavily on man coverage and involves their Nickel players as blitzers, such as what we see in Pittsburgh, his versatility to play every position in the secondary makes him a solid fit for any scheme.  Any team that drafts Holland is getting an elite playmaker in their secondary, and moreover, one that is more than willing to come up and make his presence felt in the box, regardless of where he lines up.

While Holland’s block shedding ability could certainly stand to improve, I tend to believe that his primary issues lie with inconsistent technique rather than a lack of functional strength, suggesting that improvements in hand usage could largely correct the flaws.  Moreover, similar to Mike Hilton, Holland does a great job of navigating through blockers in space without engaging, making his current issues with block shedding less concerning at the Nickel position.  Although tough to gauge due to lack of knowledge of his NFL position, Holland’s game reminds me of a cross between Eddie Jackson and Kevin King, with the ability to play at deep safety, or covering slots in man coverage, with equally good playmaking and ball skills in both roles, along with the toughness to disrupt opposing offenses as a box defender.

Regardless of where he lands in the draft, Jevon Holland has all of the physical tools and cognitive ability to serve in and add a coveted combination of turnover creation and physicality to a team’s defensive backfield.  With Cam Sutton slated to assume duties as a starting boundary cornerback, Holland could immediately become the team’s starting Nickel cornerback, helping assist with the loss of Hilton, and providing necessary versatility on the back end in sub-package sets.  If Holland is available on day two, it would be a welcome surprise to see him end up in the black and gold, where he could help stabilize a secondary managing the losses of Hilton and Steven Nelson, two stalwarts of the secondary’s recent ascension to elite level production.