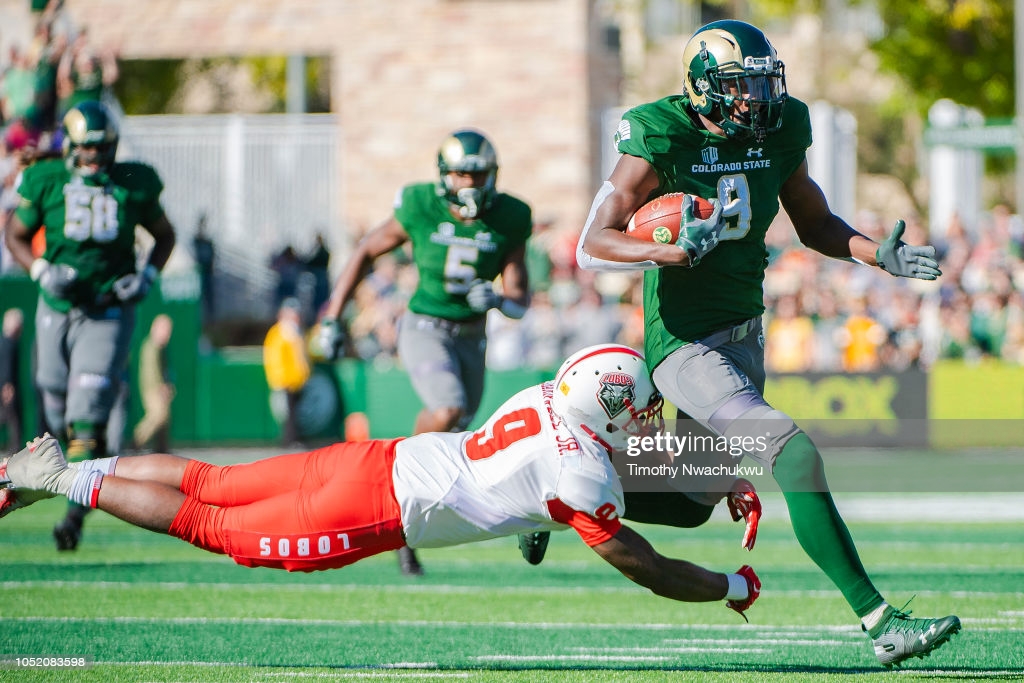 -Extremely long frame with the height that is physically imposing to smaller corners
-Good arm length (33 3/8”) that aids his ability to win jump balls in coverage
-Has a good catch radius to haul in passes outside of his frame
-Has experience playing on the boundary as well as in the slot
-Great red zone threat due to his sheer size and ability to body up defenders
-Ideal jump ball receiver in the middle of the field or in the end zone when the QB needs get rid of it
-Can go overtop the defensive back’s head and take the ball over his helmet for the catch
-Able to create YAC with his physical running style, attempting to run through tacklers and give the occasional stiff arm
-Has good body control for his size along the sideline and as a runner when taking on contact
-Does a good job of shielding the defender from the ball with his body along the sideline

-Below-average speed (4.67 40) and mediocre explosiveness (33.5” vert) for the receiver position
-Has some speed in the open field, but isn’t going to beat anyone straight-up in a footrace
-Has an extremely thin frame and would do well to add more size for contested catch situations
-Saw a lot of free releases and may struggle getting of the jam vs stronger press corners
-Not an incredibly smooth route runner, as he will round off his routes or rely on length for separation
-Had several injuries in college, raising questions about overall durability

-Senior Prospect from Mission Hills, California
-Played in all 13 games, recording 15 catches for 265 yards and two touchdowns as a rotational receiver his freshman season
-Played in 10 games and started three as a sophomore, hauling in 32 receptions for 405 yards and four scores
-Broke out his junior season with 77 catches for 1,119 yards and eight touchdowns in 10 games started
-Missed two games as a sophomore due to a knee injury and several games in his last season due to a concussion/shoulder
-Team captain as a junior, first-team All-Mountain West selection in 2019

Warren Jackson is a long, lanky receiver prospect from California who was recognized as a three-star prospect by many scouting agencies. He ended up going to Colorado State, and played mainly a reserve role until his Junior season where he broke out in terms of receptions, yards, and TDs. Jackson has elite length for the position and knows how to use it to his advantage in jump ball situations. He is the ideal contested catch target, having the incredible catch radius and surprising body control to come down with the 50/50 balls the QB throws up to give him a chance to make a play. You see his length be a big benefit here against Colorado where Jackson runs the corner route to the sideline in the end zone and goes up and hauls in the TB grab with his long arms over the shoulder.

He has fairly good spatial awareness in terms of coming down with the ball inbounds along the sideline and making contested catches with defenders draped over him. A good example of both comes from this play against Fresno State, where Jackson runs the out-and-up vertical pattern against off-man coverage and gets behind the corner along the sideline and brings in the tough grab with the defender’s hand in the breadbasket, trying to knock the ball out while the safety is coming over to try and lodge the ball out with the hit from the side. Jackson manages to hold onto the ball and an make the explosive downfield play.

Jackson isn’t a speed demon or a terribly explosive athlete in terms of burst or leaping ability, but he’s no slouch as a runner after the catch, with decent vision paired with a physical running style that will try to go through contact. Here on this play, Jackson lines up on the left side and catches the simple comeback route, hitting the defensive back with the stiff arm as he accelerates upfield for the catch and run.

Jackson uses his body like a basketball player in the post, shielding off defensive backs in the red zone and being a great option for the back-shoulder fade. You see that here against Wyoming, where Jackson gets one-on-one coverage on the outside and gets the jump ball in the back of the end zone, turning with pretty good body control in the air to come down with the ball for the score.

Jackson does lack ideal long speed to stack corners and separate when trying to take the top off a defense. He also isn’t a polished route runner, rounding off plenty of his routes and taking time to get in and out of his breaks due to his size and foot speed.  Here against Colorado, Jackson lines up on the right side of the formation and swipes the corner’s hand away in coverage, yet he fails to stack the corner as he tries to get a step on him at the top of the vertical pattern, allowing the defender to stay in-phase with him the entire rep, which later results in a contested ball that would be underthrown and intercepted by the defense.

While Jackson is a physical presence, he is pretty frail of frame and would benefit from adding some mass to him to better withstand contested catch situations and be more of an imposing target to cover. Here against Colorado, Jackson is in position to make the catch on the sideline, but fails to complete the grab through contact by the defender, resulting in the ball being popped up in the air and another defender coming in to get the interception. This would be a difficult play to make, but this is an example where Jackson’s thin, frail frame can fail him at times.

Jackson also saw a bunch of free releases in college and got away with several push-offs, which he won’t be able to get away with in the NFL. Here against Fresno St, Jackson runs an end zone fade to the back corner and clearly gets away with a push off as he hauls in the TD grab.

Overall, there is much to like from Jackson’s tape in terms of a jump ball, red zone specialist who can play in multiple spots for an offense. However, his limited route running, along with his average athleticism and thin frame, make him more of a projection at this point rather than a day one starter. He wasn’t as physically dominant as he could’ve been in the Mountain West, and he should look to improve his overall game in order to potentially earn a full-time role at the next level. He can come in and contribute as a red zone threat right away, but will need time before he can be trusted to be an every-down contributor in the league. A good comparison for a HWS perspective is Brandon Coleman, who played a majority of his career with the Saints as a red zone, big slot option that lacked ideal athleticism, but served a particular role in the passing game as an instant mismatch as far as height and size are concerned.

Should Pittsburgh be interested in adding Jackson later in the draft to add another physical presence to their receiver room to pair with Chase Claypool, and give Ben another big target to throw to in the red zone, Jackson could definitely fit that role. He has shown some versatility playing both inside and outside, meaning he could be moved around in the formation if needed. However, given his lack of route running prowess and unlikelihood of contributing on special teams, the chances of the Steelers taking the chance on Jackson later in the draft are ironically “slim”. Still, he should play a role for whatever team drafts him as a jump ball threat and receiver who can win combative catch situations.