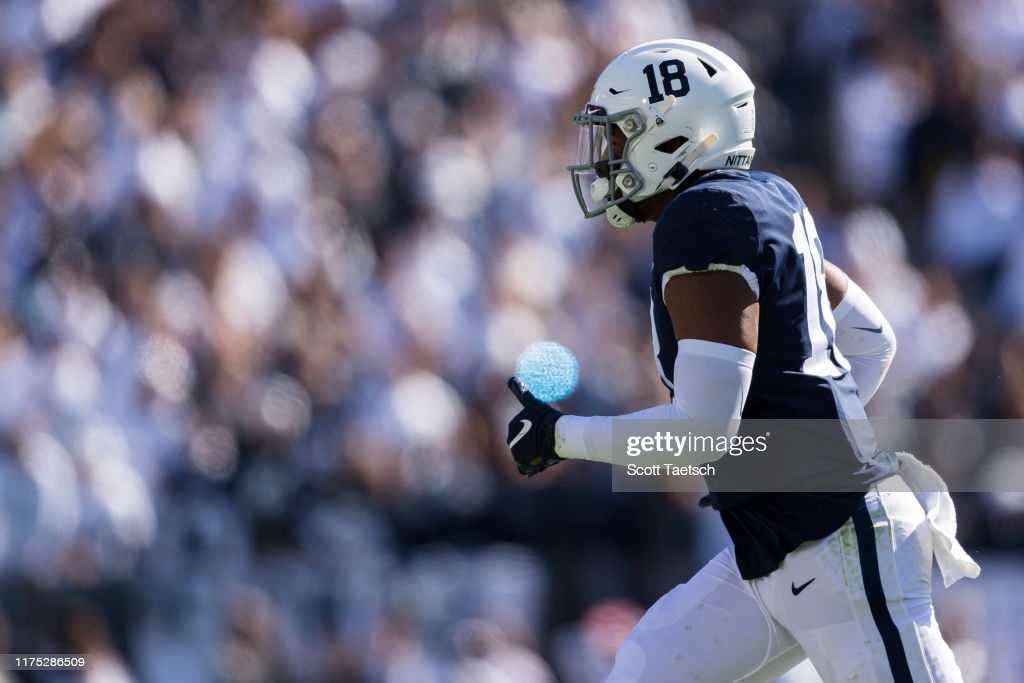 -Has good play speed (4.55 40) and explosiveness off of the line (39” vert) for the position
-Has good arm length to get hands-on the blocker and deflect passes at the LOS
-Will explode out of his stance on passing downs, putting immediate pressure on tackles trying to block him
-Plays with high effort and the motor to pursue the QB with ferocity on his pass rush
-Can be a nuisance to offensive linemen with his consistency in providing pressure on his rush
-Uses his hands well to get leverage on blockers and knock down hands on his pass rush
-Plays with a fair amount of bend around the edge when rushing the passer
-Has out-produced fellow EDGE defenders Yetur Gross-Matos and Jason Oweh in consecutive seasons
-Experienced playing on special teams and can be a good guy to have on kick coverage and the field goal block unit

-Redshirt Senior prospect from Philadelphia, PA.
-Helped lead his high school to a state title as a senior racking up over 60 sacks in four seasons as a prep athlete
-Ran track at Imhotep Charter, competing in the 400 and 4×100 relay, winning the Philadelphia public league title in 2015
-Redshirted first season on campus
-Appeared in 12 games as a freshman, recording 17 total tackles (eight solo), six TFLs, and 3.5 sacks along with two forced fumbles
-Appeared in 13 games as a sophomore, notching 23 total tackles (15 solo), seven TFLs, five sacks, two pass breakups, and a forced fumble
-Appeared and started in 13 games his junior season, racking up 40 total tackles (13 solo), eight TFLs, 6.5 sacks, a pass breakup, and a fumble recovery
-Started all nine games and elected a team captain as a senior, recording 31 total stops (eight solo), 7.5 TFLs, five sacks, a pass breakup, and a forced fumble
-First Team All-Big Ten in 2020, Senior Bowl invitee

Shaka Toney hasn’t carried the same draft hype as his teammates have coming out of Penn State, bout one could argue that Toney has been more productive than the other Nittnay Lion edge rushers over the past couple years. Toney is an explosive defender on the edge that treats the position like a sprinter lining up in the blocks waiting to explode into the backfield. There are examples of this all over Toney’s tape, lining up in the Wide-9 technique outside of the tackle and coming off the ball hard and fast. A great example here where he times the snap perfectly against Purdue and is in the backfield before the tackle is out of his stance, chasing down the QB from behind for the sack.

Toney takes great angles of pursuit to the football and can win with a variety of moves as a pass rusher. Here he gets a quick get off against Northwestern and hits the LT with the long arm, opening up his outside shoulder and riding him right into the QB, taking his outside hand and going for the strip sack fumble with a teammate recovers near midfield.

Toney’s pursuit of the football is relentless as a pass rusher, having his motor always running hot. Even when he is blocked, he will show great effort to at least impact the pass. Here against Iowa this season, He gets off the ball and gets into #77 Alaric Jackson of Iowa, running the arc and ripping his arm through, causing Jackson to get caught holding him. It doesn’t matter, however, as Toney keeps fighting and gets to #7 Spencer Petras to knock the ball out.

Toney’s mindset doesn’t change even when facing the best competition. Here a year earlier, he gets the better of #74 Tristan Wirfs with the speed rush off the edge where Wirfs tries to cut him, but Toney keeps his feet and finishes his rush for the QB takedown.  I got to work with both Wirfs and Jackson at Iowa in 2019, and the running joke was that no one could get around Wirfs. Even after a great rookie campaign in the league, Wirfs wasn’t able to get the best of Toney’s speed rush on this rep.

Toney plays with a fair amount of bend around the edge and all does a great job ripping through the block with his inside hand as showcased here against Indiana where he gets the edge on the LT and takes a great angle to the passer.

Toney’s speed off of the edge can be a viable asset when being used in the stunt and twist game with the defensive tackle or when asked to rush inside. Tackles will have to respect his outside rush, occasionally oversetting and allowing Toney inside to cross their face and impact the passer, which he does on this rep against Purdue on the RT for the big sack.

I love Toney’s motor and how he pursues the passer with effort, but also how he will use his hands to win his rush when the initial move doesn’t work. Take for example this rep against James Hudson of Cincinnati where he tries to win outside, but Hudson seals him off. Toney then hits Hudson’s shoulder with his left hand to turn him rips through Hudson’s arm with his right hand, getting inside of him pretty fluidly.

As a run defender, Toney is at his best when he is allowed to shoot games inside with speed or get a quick start off the snap and shoot his hands into blockers. Here against the Hawkeyes, Toney is able to get skinny and sneak by #71 Mark Kallenberger for the tackle in the backfield.

However, this will be Toney’s Achilles Heel, as his lack of size and functional strength tend to be a big concern when facing bigger stronger blockers. He can struggle to fight off blocks as a pass rusher when tackles get a good pass set on him, and he can get completely dominated in the run game against both offensive linemen and even tight ends. This shows up a lot on film, but Ohio State took advantage of this a lot as shown on this example where he gets blown off the ball by the TE against the run, losing his gap and allowing the back to pick up first down yardage.

If he lines up on the inside, Toney is at risk of being walled down due to a lack of sand in the pants to hold up on down blocks. Here in the same game on the play action pass, Toney tries to go inside and gets crushed by the TE on the outside, planting him into the turf.

Overall, there is a lot to like about Toney’s game when it comes to his pass rush and his effort on nearly every play. The team that takes him is going to great a high-character guy that has had respectable production every season for Penn State despite being undersized for the position he plays. He will be a core special teamer from the get-go and at the worst can come in and be a #3 or #4 on a team’s depth chart as a situational pass rusher that will bring the heat on the edge. He has lined up mainly as a Wide-9 technique, but he should be able to rush from a stand-up position as well given his athletic profile. His lack of size and mass may limit his role going forward with bigger, stronger, and more athletic offensive linemen at the next level, hence why he will need to add more mass if he wants to sniff a full-time role on the edge. However, this may cause Toney to lose speed and explosiveness off the edge, so accepting his role as a reserve situational pass rusher and a special teamer may be the best decision for the guy’s long-term career.

Pittsburgh was at Toney’s Pro Day, and should the team not pull the trigger on the likes of Jason Oweh or Micah Parsons on Day One, Toney could be their consolation prize on Day Three in terms of adding a Nittany Lion defender. They need edge help with the loss of Dupree and have no real depth to speak of. His run defense may be suspect, but with Tomlin and Colbert in attendance to watch him workout, there is a chance his in consideration later in the draft to fill that need for the team.