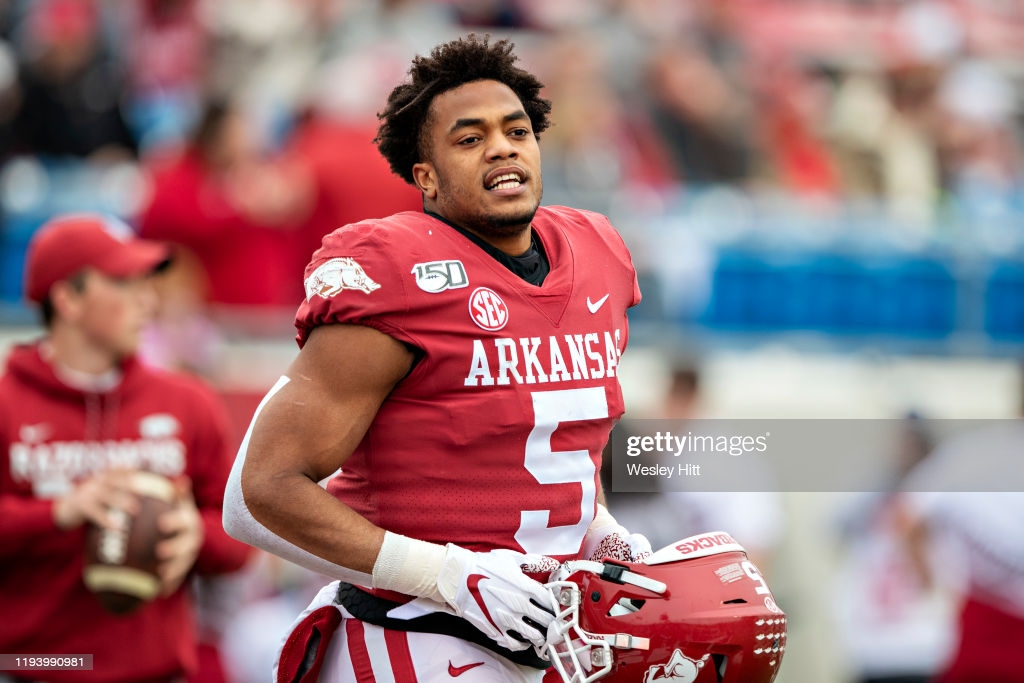 -Vision is a bit below average right now; wants to stay on schedule and go where run is designed for, leading to some missed holes
-Needs a bit of a runway to hit home run; not a sudden athlete by any means
-Though willing, does not have the lower half strength to hold up in pass protection
-Doesn’t have much elusiveness to his game; struggles to make defenders miss in space
-Despite having good hands, struggles with concentration drops

-Played in 31 games at Arkansas over four years
-Rushed 389 times for 2,273 yards and 13 touchdowns for the Razorbacks
-Added 52 catches for 358 yards at Arkansas
-Finished his Arkansas career averaging 5.81 yards per rush, sixth-highest in school history
-His nine career 100+ yard rushing performances are tied for eighth-most in program history
-Former Netflix Last Chance U star at Independence (Kansas) Community College
-Clocked a 4.58 40-yard dash at Arkansas Pro Day, and recorded a 31.5-inch vertical jump

In today’s digital age of streaming, Arkansas’ Rakeem Boyd was a household name through social media and the internet prior to landing with the Razorbacks, thanks to his star turn on the popular Netflix Last Chance U show.

While at Independence (Kansas) Community College, Boyd turned into one of the top JUCO running back’s and chose the Razorbacks over Colorado, landing in the SEC where he quickly developed into a feature back, leading the Razorbacks in rushing in each of the last two seasons.

A speed back with good contact balance and upper body strength, Boyd projects as a solid No. 2 at the next level that could hold down a three-down role in the NFL.

Though he needs a runway to reach top speed, Boyd has legitimate home run speed and can run away from defenders in a hurry, destroying any sort of angle they may have on him.

Here against Colorado State in 2019, watch the way Boyd smokes the angle the two Rams safeties have on him in the middle of the field, leading to the 59-yard score. He’s a long strider that chews up a ton of yardage on each step.

Boyd has a rocked up upper body and does a great job running through arm tackles. He’s slippery in that way, and adds some serious power at the end of runs, especially when defenders try to go high against him.

I love the way he finishes this 12-yard run against Texas A&M in 2019. He slips two arm tackles and then plows through two Aggie defensive backs to move the chains.

One year later, this is probably my favorite run I saw from Boyd through two seasons.

He absorbs the hard, high hit from the Florida defender and bounces right off of it. I like the contact balance to maintain his base, allowing him to churn towards the first down marker, moving the chains.

Quietly, Boyd has good feet for the position.

He does a great job shuffling to work to the outside here on this touchdown run against the Gators. Once he sees a lane inside though, he’s able to plant and burst through the gap for the score.

Boyd isn’t twitched up and won’t blow people away with his agility, but he has good burst when he’s rolling downhill.

Here against Texas A&M in 2020, Boyd is able to get skinny and squeeze through the hole without losing speed. He runs through an arm tackle and is then able to carry a defender into the end zone for the score.

Overall, Boyd is down the charts in this RB class, but he projects as a solid, durable No. 2 running back who can hold down a three-down role in the NFL in limited action. I love his long speed and his power overall, but he needs to work on some agility drills to add some wiggle to his game.

He’s definitely worth taking a shot on late on Day 3.