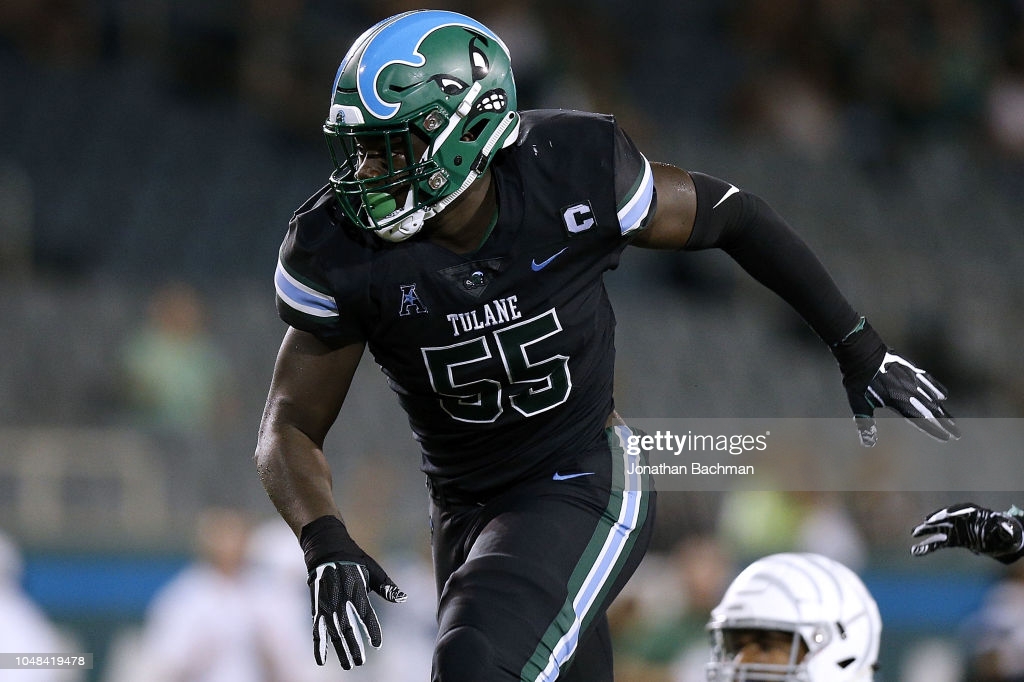 – Violent hand usage to disengage/shed blocks in run game
– Explosive first step off the ball allows him to get underneath OL
– Relentless motor, near or around football on most plays
– Alignment versatility, lined up at all defensive line positions in college
– Stout build allows him to anchor against zone base blocks, down blocks
– Flashed athleticism off edge to re-direct, work laterally to affect on backside of plays
– Fundamentally sound, shows patience in hand placement on deep drop back passes
– Showcases ability to consistently block second level defenders out of box
– Three-year starter who showed power and dominance down at Senior Bowl

– Lacks lower body flexibility to turn corner on pass rushes
– Lack of length leads to struggles shedding blocks against tackles with longer, equally-powerful frame
– High motor but pursuit speed is average, doesn’t always make tackles in open field
– Stiff hips as edge defender limits ability to drop back in coverage as an OLB
– Needs to further develop pass rush moves, limited with pass rush plan
– Can add weight to his frame, especially if he sees time as a DE in a 3-4 scheme

Tulane’s Cameron Sample has seen a lot of buzz around his name, stemming from his performance down at the Senior Bowl a few months ago. Sample’s stout frame, combined with his explosiveness and power, jump off the screen when you turn his tape on. He’s a player who was overlooked as a high school recruit, but has certainly turned the heads of scouts and NFL GM’s.

Sample’s relentless motor is on full display in this first play against UCF. The UCF quarterback, Dillion Gabriel, is known for his dual threat ability, and Sample does a nice job keeping contain, not allowing him to get outside of the pocket and closing in for the sack. Pure effort on this play, along with solid coverage downfield.

Against Army, Sample showcases his heavy hands, upper body strength and stout frame. At the point of attack, Sample showcases excellent leverage, sheds the block after getting into the lineman’s chest and clogs up the running lane by throwing the lineman. Absolutely dominant showcase of his power.

Against Memphis in 2020, Sample took over the game late, recording pressures and near-sacks on back-to-back plays. In this particular play, Sample explodes off the line, uses a long arm bull rush, and walks the tackle back into the quarterback. His display of strength nearly causes a fumble.

Sample shows pass rush upside with his explosive first step and quick hand usage, but the ability to run the arc fluidly is just not there for him. Against UCF, Sample does a nice job hand-swatting the tackle away, and tries to turn the corner, but is not able to bend it enough to get the sack. He shows his motor to nearly catch the quarterback from behind, but just can’t make the play in the backfield.

As explosive as Sample is, he struggles shedding blocks against tackles who have a length advantage against him. In his matchup in 2019 against Memphis, Sample gets beat at the point of attack and struggles countering the block on the outside zone concept.

Not only does Sample use his strength and power to disrupt the run game, he also uses his knowledge of team tendencies. In the first clip,  Sample blows up the guard and forces the running back to bounce right into his teammates. The second play,  he does a nice job getting underneath the pulling guard and makes a play in the backfield near the goal line. High-IQ football player with a ton of upside.

Cameron Sample is not someone that will start from day one in the NFL. He has the tools, motor and power to be a contributor on a rotational basis, but his size makes him a tough projection.

In the Steelers’ defense he would ideally be one of the defensive ends in their 3-4 base. He has the ability to clog running lanes and could situationally rush the quarterback off the edge. He’s a Day 3 selection who can provide depth and be a rotational piece.