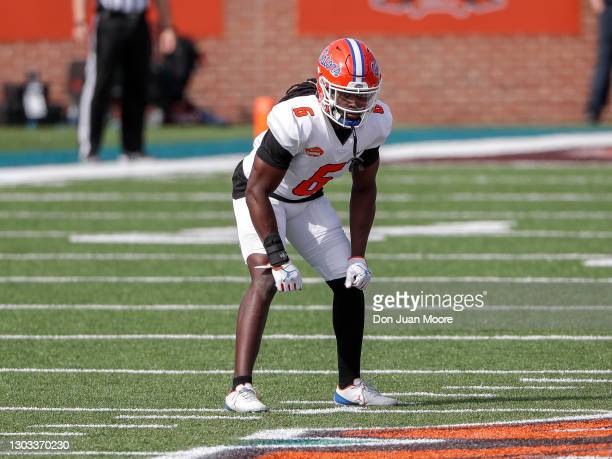 The Steelers will be looking to add depth at many positions in this draft and that includes safety.  Behind the starters there is room to add some athletes to back up the starters and play on special teams.  Shawn Davis is a physical safety who has experience playing deep, near the line of scrimmage and in the slot.

Against the pass, when playing deep Davis has played in a variety of coverages. When playing as the single high safety he maintains plenty of depth to stay deeper than the deepest receiver. In a split safety look he usually aligned to the field side and had good range and speed to run with receivers.  When in the slot, he played in off Man coverage and was able to match the physicality when matched up with tight ends. He has good change of direction and acceleration especially when coming downhill. He displays good aggressiveness versus screens and has the acceleration to make an impact as a blitzer. He is a solid open field tackler when he breaks down and wraps up. His ball skills are good when in range and will go after the ball and can make the interception.

Vs Georgia, Davis (31) comes from a two deep look he shows off his range and makes a play on the ball along the sideline.

Vs South Carolina, Davis (6) is lined up in the slot way off of the WR and will make a nice play on the fade route.

Vs Georgia, he is playing deep as the single high safety and makes the interception on a YOLO ball and shows good return skills.

Against the run, he likes to be part of the action no matter where his is lined up on the field. He has good acceleration, works through traffic well and flows to the ball.  He will attack from the deep safety; fill lanes inside when closer to the line of scrimmage and act as the force defender on the edge. He hits with physicality and will work in between the big bodies inside and shows awareness on the backs side to read the mesh.

Vs Georgia, he is the safety on the right and shows his willingness to play the run. He makes the stop inside the tackles.

Vs Georgia, he will come downhill, squares up the runner and makes the quick stop.

Vs Kentucky, he is in the box and reads the run, works through the traffic and makes the play near the line of scrimmage.

He doesn’t have the range to play as the single high safety consistently. He needs to improve on diagnosing of route combinations to put him in better position to make a play on the ball. In Man coverage he plays too far off of WR’s to make an impact on the pass. There were games where they took him out in passing situations near the end zone. The interceptions I saw were on overthrows. His angles to the outside are shallow. He doesn’t aim for the outside hip and will lunge rather than driving through the runner.  He will slip off the legs of runners.  He bows his route against the run when playing deep often running under the umpire to have to then turn to angle outside or back deep again. He will make bad choices chasing a run fake or jumping the wrong routes.

Vs Georgia, he is the safety on the right and he and the linebacker react to the running back. Realizing his mistake he turns to run deep and doesn’t see the receiver run behind him getting wide open down the left sideline.

At Texas A&M, he is lined up deep and will jump the run fake giving him no chance to help out on the deep route.

Vs Kentucky, he comes from deep on this running play and he lunges at the back hip and slips off of the tackle.

Overall, Davis is a good athlete that plays with good physicality.  He can play as the deep safety or near the line of scrimmage, has good ball skills, COD, acceleration and is solid tackler especially when supporting the run.  Areas to improve include diagnosing of route combinations, angles and routes to the outside and across the field versus the run and tackling technique.

I like Davis’ athleticism and his willingness to support the run. I wouldn’t use him as a single high safety but he has enough range and ball skills to help from other coverages.  He’s an asset against the run and has the potential to be an effective blitzer. His best fit would be playing deep in a split safety scheme along with playing in the box in a Zone heavy coverage were he can see the QB and use his COD and speed to react. For the Steelers, he could be the #3 safety backing up the starters and be a core special teamer.