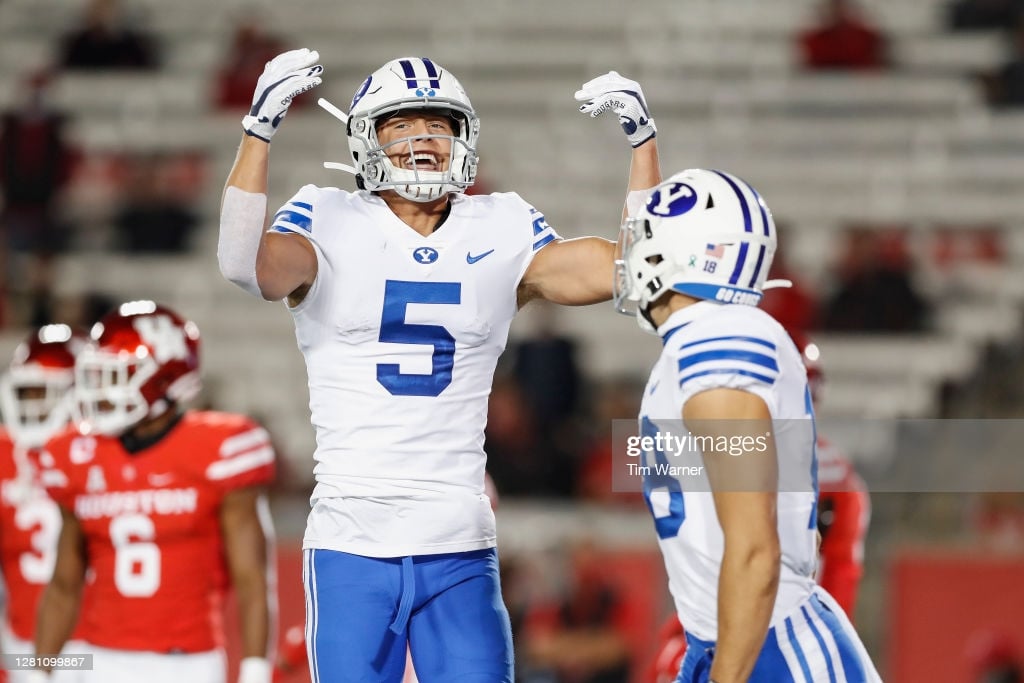 -Underrated athlete with good burst in and out of his cuts
-High-end route runner with refined route tree
-Plays well through contact and displays strong hands at the catch point
-Tracks the football well in the air
-Adept at extending routes when play breaks down and finding soft spots to win
-Good overall football IQ; smart, smart player

-Small, slight frame for boundary receiver
-Has the build of a slot receiver and may need to move inside in the NFL
-Needs to add mass and strength to compete at the next level
-Won’t scare teams vertically in the NFL despite consistently winning there in the college
-Runs hard after the catch but doesn’t create much in terms of YAC
-Not overly sudden or explosive for the position

-Played in 35 career games for Cougars
-Finished three-year career with 101 catches for 1,542 yards and 11 touchdowns
-Returned 12 career punts and two career kicks in college, bringing some special teams experience to the table
-Broke out as a starter in 2020 with potential Top 3 pick Zach Wilson at QB. Hauled in 70 passes for 1,188 yards and 8 touchdowns in 2020
-Recorded a 4.54 40-yard dash time at BYU’s Pro Day, measured in with 29.5-inch arms, clocked a 6.85 3-cone, and recorded a 31-inch vertical jump

Brigham Young QB Zach Wilson stole the show in college football in 2020, lighting the country on fire with some impressive displays.

Wilson, who will likely go in the Top 3 picks at the end of the month in the 2021 NFL Draft, had to throw someone the football, and the guy who benefited from that the most was junior receiver Dax Milne.

Though he’s not the best athlete and won’t blow people away with speed and agility, he found a way to win consistently for BYU, mainly vertically.

Against Houston in 2020, Milne showed he can win vertically and through contact, taking the first play from scrimmage to the house. He shows strong hands at the catch point, snatching the football out of the air through contact, winning in the air.

As a route runner, Milne is pretty darn technical. He hits his spots, wins with burst into and out of his cuts, and creates ample separation.

Against Boise State in 2020, Milne does a great job selling the out route before turning the route upfield on the out and up, winning through contact at the end of the route for the big gain.

He wastes very little movement in his routes.

Here against Houston, Milne shows a subtle shake inside before bouncing back outside and getting vertical into the back corner of the end zone, making the catch with the corner draped all over him.

Milne’s body control is quite impressive on tape too. He’s rarely knocked off-balance, and always has his hips and feet underneath him.

He does a great job using his body control to get around on this underthrown ball against Houston, tapping two feet inbounds for the impressive catch down the field.

He’s not going to beat you with speed at the next level, but he’s a crafty, technical route runner and hits his marks.

This double move against Troy was a thing of beauty last season. He sells the slant so well, causing the corner to bite inside, allowing him to cut back up the field for the wide open catch and score.

The one thing I truly loved about Milne’s game was his ability to work open on broken plays, consistently finding the soft spot in the defense to show his number to his QB to try and make a play.

This is from 2019 on the road at Boise State, but I’m a big fan of the way Milne worked through contact to get back inside in the red zone, leading to the score.

Overall, his testing numbers were relatively poor for the position, and his measurables leave much to be desired. But he profiles as a technical slot receiver, similar to one Hunter Renfrow in Las Vegas.

He’s super small and doesn’t have a ton of speed, but he just knows how to get open. That said, I wouldn’t use a valuable pick on him.

He should be around late on Day 3, and could profile as a back-of-the-room-receiver with some special teams prowess.