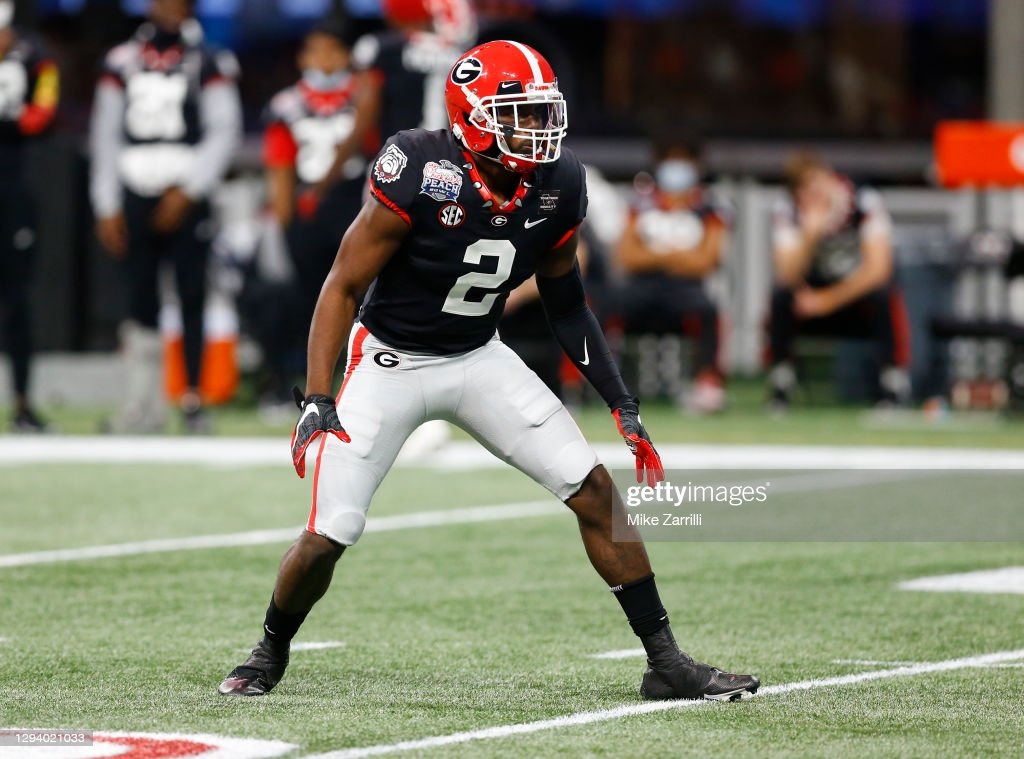 A three-year starter for a powerhouse program, Richard LeCounte has a lot of experience, and it shows on film.  He played primarily as a deep safety and has a knack for being around the ball and creating turnovers, with eight interceptions and six forced fumbles.

Against the pass in Georgia’s defense, he was tasked to play deep, and was used in multiple coverages and was a strong communicator to get teammates in the correct positions. He aligned to both the field and boundary sides, and has solid range from a single-high look.  He has a good understanding of route combinations, and is effective at reading the quarterback to flow to the ball. The interceptions I saw were generally on overthrows, but it shows his ability to diagnose and be in the right area when the play happens. He displayed good acceleration to blitz from the slot or from 15 yards off the ball. When hitting a receiver trying to catch the ball, he aimed for the ball, allowing for pass breakups. Versus screens, he showed good reactions, speed to the ball, and good timing to break down for the tackle.

At Arkansas, LeCounte (2) makes a nice read on this slant and puts a shoulder on the ball to break up the pass.

At Arkansas, his flow to the ball allows him to make the interception on this overthrow, and he adds a nice return.

At Arkansas, he is creeping up to the line at the far hash, and plays this swing pass/lateral well to make the quick tackle.

At Kentucky, he is aligned inside the far hash and reads the QB to come across the formation to undercut the slant route to break up the pass.

Against the run, he displayed good mental processing to read the play, and good pursuit to the ball. He accelerated quickly coming downhill, and took solid angles to the outside. He was willing to come up on the outside and take on blocks to force plays inside. LeCounte was a willing participant, but was too far from the play generally to make a consistent impact.

Versus Baylor, he shows his willingness in the running game, taking a wide angle to forcefully take on the blocker and not only clog the lane, but force the play inside of him to his teammates.

At Alabama, he takes a good angle to the ball, not overcommitting in any direction, and makes the stop on the runner.

At Kentucky, he again comes downhill to make a play on the ball, and despite tackling around the head, he makes the stop.

He is not suited to play Man coverage in the slot versus receivers.  His initial reaction is to immediately grab the receiver to slow their routes. LeCounte’s tackling technique generally has him aiming high above the waist, and it may be as a result of when he aims low, he slips off of the runner’s legs. His opportunities to make a play on the ball were limited due to how deep he was asked to play. He has a thin frame and lacks physicality as a tackler.

At Arkansas, he is in the slot and tries to jump the inside angle of the receiver, and gets caught giving up the long score.

At Alabama, he is in Man coverage on the tight slot, and as the receiver breaks, he grabs on with both hands.

Overall, LeCounte comes from a good program with a lot of experience.  He is a good communicator, strong at diagnosing plays, has solid range and a knack for creating turnovers. LeCounte is not a candidate to play Man coverage: He’s very grabby within the routes, aims too high as a tackler, and must improve his tackling technique.

LeCounte would fit in a defense that allows him to play deep, capable of playing as the single-high safety but better as a split safety where he can read and react to plays in front of him.  For Pittsburgh, he could be a backup at free safety and a special teams player, but he has little experience doing that in college.