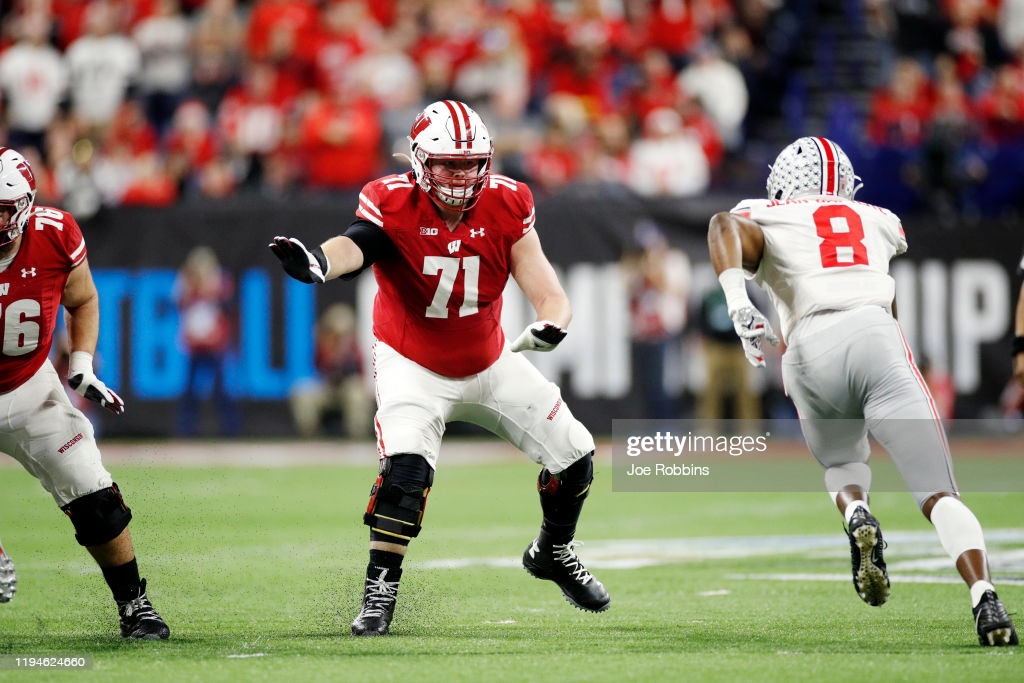 -Plays with good power in the run game when asked to come downhill
-Has good foot drive when he makes contact with a defender, and carries the mass with the strength to move people off their spot
-Can create nice seals in the run game and wash defenders down out of the play on down blocks
-Will angle his shoulders well to turn defenders away from the ball and allow the back to run right off of his backside
-Does a good job staying on his run fits throughout the play
-Has the demeanor you like to see in a run blocker
-Is capable of working up to the second level of the defense

-Athleticism is average to below average in terms of explosiveness and lateral quickness
-Doesn’t have freaky length and reach you’d love to see from a starting NFL-caliber tackle prospect
-Doesn’t have the quickest feet in pass protection
-Vertical sets and kick step can be slow, allowing edge rushers to get the corner on him
-Can get anxious at times on his quickset, lunging forward to try and get hands-on with the defender, causing him to lose his base or whiff on his initial punch
-Isn’t the most natural hip bender, and overall mobility can be a concern
-Defenders will cross his face due to lack of reach and foot speed to recover on inside rushes
-Ends up on the ground far more than you would like to see
-Traits and limited upside suggest a move to guard at the next level could be in the works

-Redshirt Senior prospect from Green Bay, Wis.
-Father, Thomas Van Lanen, swept Wisconsin Division 2 state titles in discus and shot put in 1994
-Took after his father throwing shot put and discus in high school, sweeping discus and shot-put titles at 2015 Wisconsin Division 1 state meet as a junior, and finished state runner-up in both discus and shot put as a sophomore
-Redshirted first year on campus in 2016
-Played in all 14 games as a freshman, mostly as a reserve
-Played in all 13 games with one start as a sophomore at LT
-Started all 13 games at LT his junior campaign
-Played and started in all seven games his senior season at LT
-Rated as nation’s highest-graded offensive tackle for 2018 season by Pro Football Focus (90.4)

When watching Cole Van Lanen from Wisconsin, you can pick out the stereotypes in his game right away. He is your typical Badgers offensive lineman that excels in the run game, playing with technique and a physical demeanor where he wants to dominate the man across from him. Whether it be blocking the base defensive end on the outside, coming across the line to pick up a blitzer coming through the hole, or by climbing to the second level to get a linebacker, Van Lanen plays the power run game like you want an offensive lineman to.

Here is a great example against Michigan St., where Van Lanen is asked to pick up the interior defensive tackle and manages to get down the line quickly, replacing inside to allow the guard to go get the backer while Van Lanen turns his shoulders to seal off the defender, creating a gaping hole for #23 Jonathan Taylor to run through for the big gain.

His movement skills in the run game show up when he is asked to pull from the tackle spot, as well. Van Lanen is an effective kick out blocker as evidenced on this rep against Ohio St. where he pulls from left to right, leading up the hole to pick up #5 Baron Browning for the nice pickup.

Another example in the same game against #2 Chase Young where Van Lanen shows his tenacity to get into Young’s chest and get him out of the play just enough to spring Taylor for the long run on the left side. Sure, he doesn’t dominate Young on this rep, but knowing the physical specimen Young is, this is a great executed block by Van Lanen.

Van Lanen isn’t the most fleet of foot when it comes to pass protection, however. He tends to be labored in his steps and will rely mainly on his quickset to get hands-on a defender rather than trying to vertical set. He does play with urgency, though, and will give his best effort to be in position to seal the edge. Here his feet are slow once in his pass set, but he jumps out of his stance, knowing full well the player who is across from him, and does his job keeping the QB clean.

This being said, effort will not absolve Van Lanen’s sins in pass protection. He is a mediocre athlete at best, and with average arm length and hand size, he can have a tough time getting a good initial punch on his target and holding his block for a sustained period of time. Take, for example, this rep against Young where Van Lanen whiffs completely as Young turns the corner right around him on the edge, impacting the passer as he throws the ball.

Van Lanen has a bad problem of lunging forward, both in the run game and in pass protection, trying to get into a defender as quick as possible to avoid getting beat with speed. This causes Van Lanen to whiff on a lot of blocks and give up his base, losing his anchor and balance. Here is a clear example against Iowa where Van Lanen lunges forward to try and get #94 A.J. Epenesa who is turning the corner. Epenesa swats his hands aside, causing him to completely miss the block. The defender gets home to the QB, causing the strip-sack fumble.

Another clear example against the Spartans where Van Lanen lunges forward on the run play, but #48 Kenny Willekes crosses his faces and swims inside him to get in on the tackle for no gain.

Another example where Van Lanen whiffs on the block by lunging forward, allowing the defender to get to the QB and force the ball to come out early.

Van Lanen can struggle with defenders coming inside of him and not having the footwork or the hand strength to seal them off and pick them up from crashing the pocket. Here against Young, Van Lanen does well sealing the outside rush, but loses his base, standing up and allowing Young to counter inside, crossing his face and finishing at the QB for the sack.

Overall, Van Lanen matches the prototypical Wisconsin offensive tackle that has good skills and push in the run game, but lacks that athleticism and quick feet to be a consistent pass protector at the next level. He shouldn’t be confused with the likes of Ryan Ramczyk or Rob Havenstein, but more along the lines of a guy like Michael Dieter, who himself had to kick inside to have a semblance of a career in the NFL. Van Lanen could possibly be left at tackle going to the pros, but given the struggles he currently has and the level of competition he will see, his best move would probably be to kick inside and play in a phonebooth, where he can accentuate his strengths as a run blocker and minimize his weaknesses in pass protection and setting vertically against speed.

Regardless, Van Lanen is a player you want to mainly work in a gap/power scheme where he can use his strengths as a run blocker to his advantage. The name Ike Boettger comes to mind as a fair pro comparison, being a tackle at Iowa but since being moved to guard for the Buffalo Bills, seeing a fair amount of starts for them over the past few seasons.

As far as the Steelers are concerned, they probably should pass on a guy like Van Lanen until later in the draft if the tackle need hasn’t been filled. Even then, it would probably be wise to take a more athletic player at the position who may need some refinement, but has a higher overall ceiling than what Van Lanen possesses.