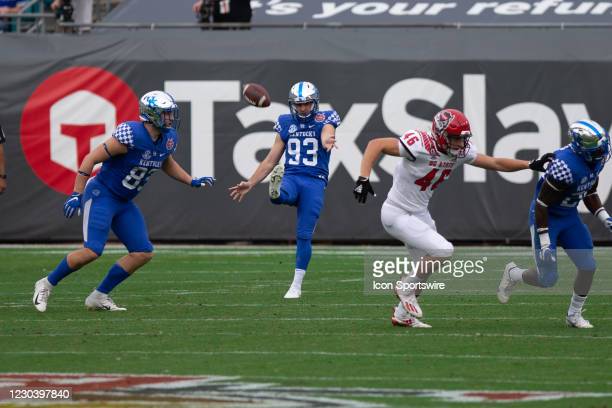 – Good starting experience
– Fantastic production
– Elite directional/coffin corner punter, puts backspin on ball so it dies as it lands, rarely resulted in touchbacks, fantastic Inside 20 rate
– Despite rugby style, never had a punt blocked
– Adequate leg strength
– Strong athlete for the position, handles pressure and rush well, and enough speed to be a running threat for fakes
– Experience as a holder
– Looked comfortable and competent with traditional/spiral punts when asked to execute them
– Good character/personality, named team captain
– Performed well in rainy/bad weather games, has experience in those situations (Louisville 2019)

– Hand size is on the small side (8 3/4″), has shown some issues catching the ball cleanly and consistently
– Largely a rugby-style punter, will need to transition to NFL punting
– Rugby style allowed him to have incredibly long snap to punt times and take several steps to punt, luxuries he won’t have in the pro game
– Will need to consistently show hangtime on traditional/spiral punts, rugby style kicks were often low lines designed to bounce and not be caught/returned, which helped his average and net
– Team used shield punt formation to slow down rushes, often didn’t face much pressure when he punted
– Snap to punt times were on the higher/longer side even on traditional punts
– Limited or no experience handling kickoffs
– Numbers did drop in 2020 compared to 2019, though that was more of a regression to mean than actual struggles
– Unlikely to be an asset throwing the ball for any fakes
– Old for a prospect, though matters less for the position

– 34 career games for the Wildcats
– Career: 151 punts, 46.0 yard average
– Zero blocked punts
– 27 years old, turns 28 on April 11th
– Right-footed punter
– 2019 Ray Guy Award Winner (best punter) and Consensus All-American
– 2019 stats: 48.1 yard average (#1 in NCAA, T-5th in a single season since 2000)
– 46.0 yard average is fourth all-time (since 2000)
– One career rush for 26 yards, unintentional fake against Missouri (ran the ball on 4th and 1 because there was no rush)
– Had change in STs Coordinators for 2020, didn’t have dedicated STs coach but several coaches who contributed to different areas (Jon Sumrall was his specific punting coach)
– Previous ST Coach was Dean Hood, who was Jordan Berry’s coach at Eastern Kentucky when the Steelers drafted him
– Participated in 2020 Senior Bowl for National Team
– Played for Fremantle in the Australian Football League
– Born in Perth, Australia
– Studied sports psychology in school
– Friends with Steelers’ punter Jordan Berry; the two helped recruit Berry’s younger brother Wilson to replace Duffy at Kentucky

For the first time in Steelers Depot history, we’re breaking down some punters pre-draft. And with good reason. There is a chance the Steelers use a Day 3 pick on the position. Jordan Berry had a career high average in 2020 but the team wasn’t afraid to cut him either, even if it may have partially been a financial decision.

Duffy is arguably the top-rated punter in the class, though those rankings don’t always play out on draft day. Still, STs Coordinator Danny Smith attended his Pro Day. So let’s dive into Duffy.

From the tape I watched, his best trait by far is his ability to pin teams deep. He does a great job with directional and coffin corner punting. His touchback rate was extremely low, just 4.8% for his career. For comparisons’ sake, here’s Berry’s average since 2016.

Berry posted better numbers in ’16 and ’17, but his TB rate has gone up each of the last three. Duffy also had a 45.9% Inside 20 rate, besting Berry’s career average of 40%. Some of that is dependent on field position and coverage but watch the tape and Duffy has a knack for getting the ball to die when it bounces inside the five or ten.

He’s also been cool, calm, and collected in high-pressure moments. When teams did get aggressive and attack his rugby style of punting, which required anywhere from 2.02 to 2.90 seconds from snap to punt in the ones I observed, Duffy was able to navigate the attack and focus on getting the ball away. The best example comes here. This is his Aussie Rules background coming into play. Don’t ask him to throw but he can run a little bit.

Crucially, he handled the important role of being the Wildcats’ holder in 2020. Some punters in college don’t hold. Because rosters are so large, you can have multiple punters/specialists and functionally have a designated holder. Such was the case for the first two seasons of Duffy’s time at Kentucky. Grant McKinnis held that role before deciding to transfer to Missouri for the 2020 season; he wanted to be a starting punter and had no chance of usurping Duffy. So, Duffy became the holder. I’m not one to accurately judge how good of a holder Duffy is, but the fact that he has at least one year of experience is important, because almost all punters in the NFL have to hold.

In terms of negatives, the biggest one is the fact he’s a rugby-style punter and didn’t punt in a “pro setup,” as funny as that is to say about punter. The stuff he did in college won’t work in the pro game. Here, he takes a nine-step punt before booting this one away. Do that in the NFL and you’ll be crushed, looking up at the sky, the ball bouncing somewhere behind you.

It’s a much different and wider split punt formation to than the pro game. What you see here is night and day from what the NFL will ask of him.

To be fair, and Duffy pointed it out talking to media after his Pro Day, several NFL punters transitioned from rugby to the traditional/spiral punting. And Duffy has experience as a traditional punter, he did a little of it in Kentucky. It appears more of that came in 2018-2019 than 2020 after STs coach Dean Hood took a head coaching job at Murray State. But it was used in situations where teams had aggressive rushes to block. After that near-block versus N.C. State, Kentucky switched to a traditional punt the next time.

And Duffy punted that way at the Senior Bowl. Though I was timing snap to punt and not catch to punt, which involves a whole operation (long snapper and punter), Duffy’s snap to punt times even in traditional styles were on the high end: on average, 1.92 seconds snap to punt; it’s hard to find a consensus NFL number, but most teams want it in the 1.8-1.85 range. Again, part of that is operation and dependent on the long snapper’s ability. But I would like to see Duffy speed things up a bit. At the Senior Bowl, two of his three punts were at or above two seconds from snap to punt.

Of the punts I logged (the sample size isn’t huge, I admit), here were his overall numbers.

Pretty average to below-average numbers. That does need to consider the rugby style of punting, which takes much longer to punt and are low-liners, decreasing hangtime. But that makes Duffy a bit of projection, something risky for any player. How well will he do as a traditional punter?

Duffy could be enticing to a Steelers’ team that generally prefers directional punting over someone who has a booming leg. But I wonder if he’ll be as effective with some of the backspin and Inside 20 punting with the more traditional style. There’s a risk there that’s hard to evaluate with such limited information. I’d sign him as a UDFA, but I’d feel a little uncomfortable about using a draft pick on a guy like that.

Should he come to Pittsburgh though, it’d be a great story. I’m not sure where the friendship began, aside from them being Aussies, but he has a good relationship with the Steelers’ Berry. Duffy talked about how much Berry has helped him through this process. As I noted above, they helped recruit Berry’s younger brother to Kentucky to replace Duffy. That would be a fun battle to watch play out in training camp. And if he’s a UDFA and has his pick where he could go, I wonder if he’d be up for that kind of challenge.