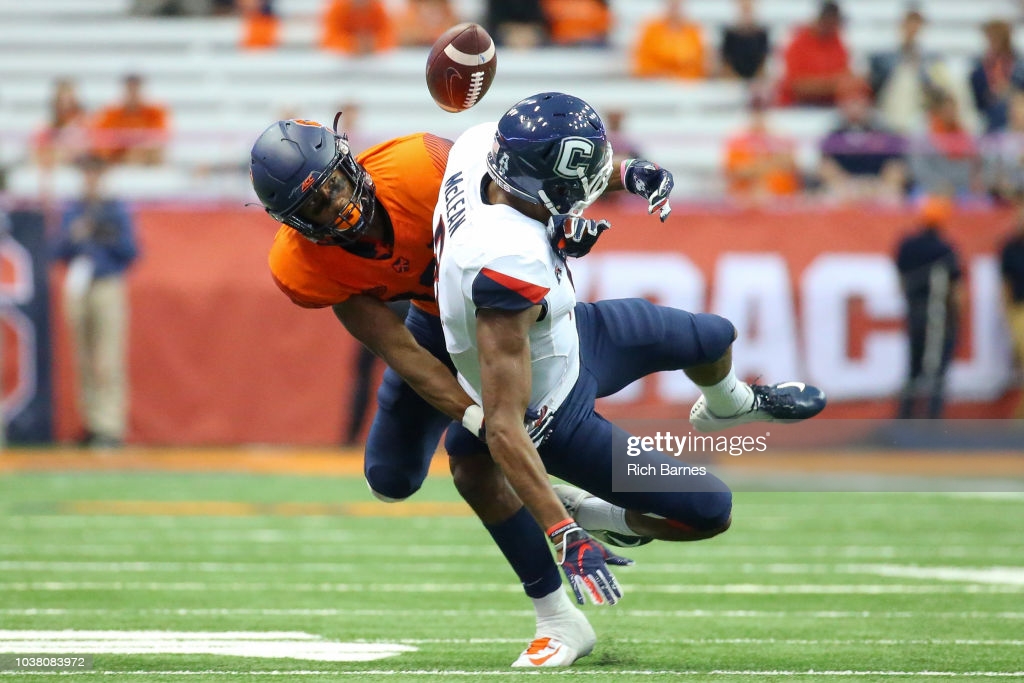 Similar to fellow safety prospect (and potential Pittsburgh Steelers draft target) Trevon Moehrig , Andre Cisco is going to be drafted in the 2021 NFL Draft due to his playmaking ability, range, ball skills, and versatility in different zone schemes. Cisco has a nose for the football. However, Cisco will most likely be selected later than Moehrig (and some other safeties) due to the ACL injury he suffered in 2020, as well as the inconsistencies he has put on tape throughout his collegiate career. With Cisco’s tape, there’s a lot to like, but also some areas that require extensive improvement (like most prospects).

In terms of improvements, Cisco can work on further developing his mental processing in order to ensure he isn’t late to his assignment on a given play. This should help the consistency of his reaction skills so that he’ll give up fewer big plays both through the air and on the ground. Cisco displays patience to read plays, which helps him stay disciplined to avoid overshooting a fake, but this patience can also leave him a step slow to react. This has caused him to be beaten over the top or take a bad angle in run defense at times. Substantial film study is definitely something that will aid Cisco in that regard. He has the athletic gifts and has shown instances of elite instincts/recognition (IQ), so if he’s able to put it all together and work on the fine details, he could provide great value depending on where he ends up being taken in the 2021 NFL Draft.

The ball hawk flashes are there, but Andre Cisco needs to achieve consistency.

In this first clip from one of his 2020 games vs. UNC, Andre Cisco displays his range on the back end.  Cisco is patrolling center field as the single-high safety. He locks down the post by reading the quarterback’s eyes in his backpedal, before opening up and darting over to the boundary side throw.  He out-jumps the receiver at the catch point and demonstrates confident hands to pluck the ball out of the air, then he looks to make something happen on the return. This play encapsulates Cisco’s potential as a rangy, ball-hawking safety.

In this clip from Syracuse’s 2019 game against Louisville, Andre Cisco again displays his playmaking ability. His aggressiveness and instincts are on full display here as he jumps the short pass for an interception. Cisco is at his best when working top-down, towards the line of scrimmage, so that he can survey the whole field and let his eyes take him to the football.

Here, he doesn’t let the run fake fool him as he sees the receiver (Tutu Atwell) running across the formation, and this takes him right to the floated pass that he’s able to dive for, coming away with an interception.

In this clip from the Orange’s 2019 matchup with Wake Forest, Andre Cisco fires down to wrap up the QB keeper just past the line of scrimmage. He sees the run, quickly reacts, then breaks down into position while keeping his feet moving to burst and latch onto the QB’s thigh. He’s then able to wrangle him down to the grass. A great tackle from Cisco here.

In this clip from the same 2019 game vs. Wake Forest, Andre Cisco shoots down from the middle of the field post-snap and gets his hand on the short, fourth down pass. There appears to have been some miscommunication between the QB and receiver, but Cisco positions himself excellently to make a play on the throw even if the receiver had the chance to make a catch. He understood the situation based on down and distance, and immediately came up to make a play.

This clip is from Andre Cisco’s second 2020 game vs. Pittsburgh. He communicates with his teammate pre-snap, sticks with the receiver despite the motion, and appears to also glance at the QB’s eyes/movement to the right which takes him over to the flat. He’s able to quickly cover ground and range over to take the receiver down just past the line of scrimmage in the red zone.

This clip from Syracuse’s 2019 game vs. Boston College illustrates Andre Cisco being a playmaker yet again. This time, he creates a turnover via a forced fumble. Post-snap, Cisco positions himself to guard the tight end/H-back that moved laterally across the line of scrimmage. The other tight end that leaked out after faking to block is wide open and receives the pass. Cisco then quickly chases him down and punches at the ball from his blind spot, dislodging it for his teammate to grab and return upfield.

This clip from Syracuse’s 2019 battle with Wake Forest defines Andre Cisco’s tendency/ability to lay hits on receivers when they’re running in-breaking routes. While this tendency to lower his shoulder and go for the big hit does oftentimes deal damage to opposing receivers (and likely makes them think about his presence when running across the middle of the field, intermediate or deep), I think Cisco will have to focus on wrapping up in the NFL in order to become a consistent tackler. As seen in the clip, the receiver is able to absorb the blow and stay on his feet. You can’t give extra yards off of missed tackles in the NFL, as those yards might end up costing your team points. Football is a game of inches.

This clip from his 2019 game vs. Boston College shows Cisco trying to hit with his shoulder instead of wrapping the ball carrier up. Again, Cisco will have to work on the fundamentals of his tackling in order to achieve consistency.  He can also work on taking better pursuit angles to put himself in position rather than putting himself at a disadvantage, then diving or trying to hit with his shoulder. These two issues compound at times.  Hopefully (and likely) with NFL coaching, they can be resolved. These types of reps with improper technique do often pop up on Cisco’s tape.

In this clip specifically, Cisco dives with his right shoulder and the running back easily runs right through him, allowing the RB to gain some extra yards at the end of the run. Not a great attempt.

In this clip from the 2019 game against Louisville, Cisco is beaten deep on a post route from speedy slot receiver Tutu Atwell. Atwell almost lulls him to sleep off the line before bursting past him inside and towards the goalpost.  Cisco’s aggressiveness or eyes/processing leaves him victim of the big play occasionally.

On this play specifically, it looks like he has eyes on Atwell the whole way through, but he slightly bites towards the outside and isn’t able to flip his hips in time to stick with him to the inside. With Atwell’s speed, Cisco doesn’t have the chance to catch up.

Andre Cisco has a ton of potential at the pro level. However like most prospects, he also comes with flaws. The main concern with Cisco is inconsistency. He is a playmaker, but he has also shown a tendency to give up the big play in his collegiate career. On top of that, he’s recovering from a torn ACL which cut his 2020 season short.  Franchises will definitely be thorough when combing through and reviewing his medical information. Andre Cisco doesn’t provide the consistency that a top safety prospect such as Trevon Moehrig does, but he does offer a similar ball hawk mentality and ability that isn’t found in every safety prospect. The franchise that drafts Cisco will do so because of this ball hawk range, in the hopes that they can shape him into a well-rounded safety. If that team can coach up Cisco’s weaknesses, he would return a massive amount of value, as he likely won’t be one of the first safeties selected in the 2021 NFL Draft. He should find a home in a zone-heavy scheme come the end of April, into the start of May.