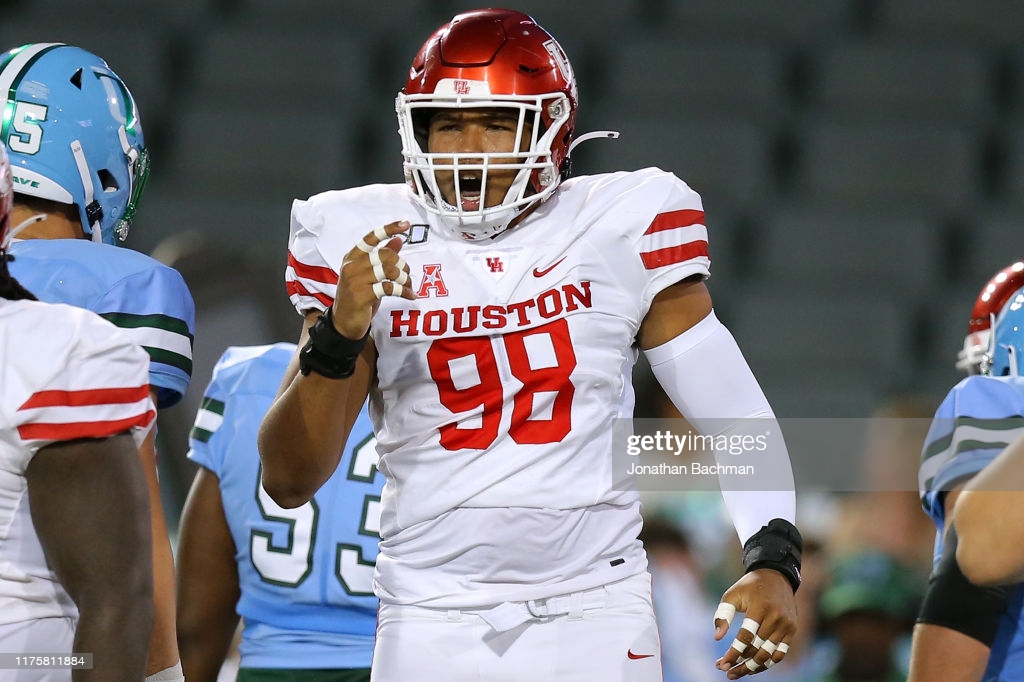 -Played both with his hand in the dirt and in a 2-pt. stance on the edge
-Played all over the defensive line, lining up from outside of the tackle to outside shade of the center
-Freakish size and length for an edge prospect
-Fantastic arm length (35”) and wingspan (84”) for going against blockers and keeping them off of his frame as well as contesting passing lanes
-Has good play speed and a fair amount of explosiveness off the snap for the mass he carries
-Plays with a good amount of bend and balance for his size and length around the edge
-Gets that lean around the arc of the pocket, getting low enough to get the angle around the tackle
-Has a strong bull rush with the size and power to knock blockers back
-Can be too big and powerful for blockers to recover from if he gets a step on them or crosses their face
-Can make quick adjustments in short area changes of direction to tackle ball carriers in space
-Has plenty of room to grow and be a more productive pro than he was as a college player

-Hand placement can be improved when stacking and shedding against the run to get off blocks
-Needs to better refine his pass rush technique and use his hands better on his pass rushes in order to be more consistent as an edge rusher
-Doesn’t have a go-to counter move in his pass rush repertoire and will get neutralized if initial rush fails
-Needs to develop a pass rush plan to win more of his reps against quality offensive linemen
-Likes to leave his feet too often when he can just go through the ball carrier
-Will stand upright on his rushers at times exposing his chest or get too narrow, allowing blockers to knock him off his spot
-Pad level when engaged with blockers can be improved as he gets too high and narrow
-Needs to play with better gap integrity in terms of keeping outside contain against the run
-Raw player that probably will need some time to grow into himself more and adjust to the speed of the game

-Senior prospect from Houston, TX
-Missed majority of his senior season in HS due to a knee injury
-Also played basketball for Westside HS
-Played in 11 games as a reserve in 2017, tallying 14 tackles, two for loss, with one sack, one interception
-Started first 11 games of the season as a sophomore before a season-ending foot injury, totaling 42 total stops (21 solo), 3.5 TFLs, no sacks, and four pass breakups
-Started all 12 games as a junior, recording 33 total tackles (20 solo), 7.5 TFLs, 3.5 sacks, and four pass deflections
-Played in only 5 games in his senior season due to the pandemic, but still racked up 25 total stops (17 solo), 10.5 TFLs, five sacks, and a forced fumble
-Team captain in 2020, 2020 American Athletic Conference Second Team

Payton Turner from Houston is a senior prospect that has been a three-year starter for the Cougars but is still pretty raw as far as EDGE prospects go, with a bunch of room to grow. He is a physical specimen possessing the height, length, and power to be a disruptive force all over the defensive line. Whether it be lined up on the edge or kicked inside on sub packages to rush over the guard or center, Turner wins with a lot of power in his game. Take for example this rep vs BYU where he lines up inside and rushes over the RG, driving him back to collapse the pocket and putting the large man on his back into the turf.

Despite being a large human being, Turner is pretty nimble on his feet and has a great deal of bend and closing speed when rushing the passer or chasing down ball carriers. He can win on the edge or shoot inside, crossing the blocker’s face and winning against half a man. This rep shows that perfectly as Turner uses the arm over/inside swim move vs BYU’s #67 Brady Christensen as he overextends, besting him inside and taking down QB Zach Wilson for a sack.

He has good speed on the edge and can get the corner with his burst and bend around the arc. Here against Tulane, Turner rips through around the LT as he gets the corner right into the QB where he uses his arm length to reach out and take him down.

This play against UCF is even more impressive as Turner shows amazing get off on the snap of the football for a 270 lbs. defender, getting the outside shoulder of the RT as he turns the corner and lands the big hit on the QB, knocking the ball out which his teammate returns for the scoop and score.

Turner’s change of direction ability for his size is also pretty impressive, to say the least. Here against BYU, Zach Wilson hits the quick pitch to the back, but Turner recognizes the play and quickly pivots to pursue, opening up in a dead sprint to chase down the ball carrier and limit him to a modest gain on the play.

However, as we see here on this play and in other occasions on Turner’s film, he loves to leave his feet and rely on his length to bring down ball carriers. Now this will work some of the time, but he really needs to do a better job driving his feet on contact instead. If he doesn’t, he’ll whiff on tackles like he does here. Turner gets back up and makes the play which is a testament to his effort, but he would be better off completing the form tackle in the first place.

Another key technical thing that Turner needs to work on is being gap sound against the run. He will occasionally get too antsy and try to crash inside, losing outside contain and giving up big plays on the outside like he does here vs UCF, leaving the outside gap completely unaccounted for, which results in a large gain on the ground.

Being 6’5″, Turner naturally is pretty long and needs to play with better pad level and avoid standing too high on his rush or narrowing his base to be easily pushed off of his spot. He does that just here on this rep, being a little sloppy on his rush standing straight up and allowing the RT to get a nice punch on his inside shoulder, knocking him backward and keeping Turner from impacting the pass.

Finally, Tuner needs to improve his hand usage and work on developing a counter move should his go-to pass rush move fail. He tends to panic when his initial rush fails if he doesn’t start with a bull rush, and will have his rush die out for lack of confidence that he can shed the block. That appears to be the case here, as Turner tries to hit the push/pull but the tackle expects it, and anchors in well with good hip bend. Turner then tries to jump up to affect the passing lane before the ball is even thrown, and eventually breaks off to the side away from where the QB is going.

Overall, there is a lot of refinement that needs to go into Turner’s game to become a more well-rounded presence on the edge for an NFL defense. However, his size, length, and athleticism are tantalizing for a player that should be able to play as a base 4-3 defensive end and also a 3-4 outside linebacker given his burst off the ball and ability to bend around the corner. His size, long arms, and athletic traits are eerily similar to that of Preston Smith, who is also a physical freak with similar size to Turner.

Turner has said that he has been in contact with members of the Steelers coaching staff, and the need for depth at outside linebacker is there after the loss of Bud Dupree in free agency. Should the team prioritize adding a player like Turner in the middle rounds, he would be able to sit and develop behind Watt and Highsmith as he develops into their third pass rusher on the edge, with the athletic ceiling to be a force in the league. Should the value of Turner match up with the Steelers’ need of an edge defender on their draft board, there is a chance he could be the pick somewhere on Day 2 or early Day 3 of the draft.