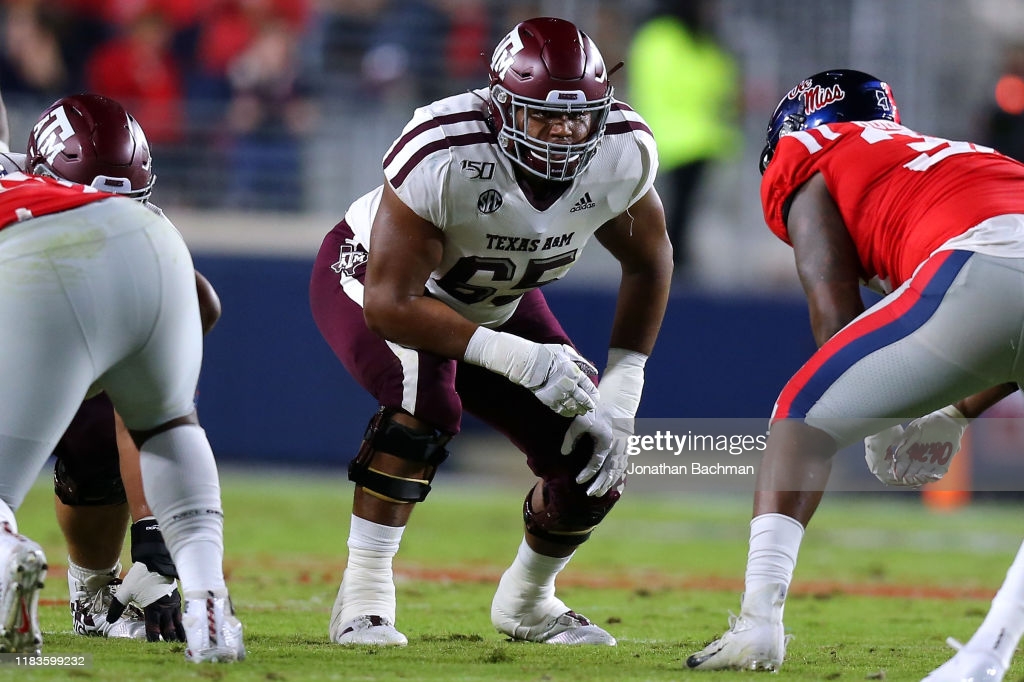 – Good athlete who plays with massive wingspan
– Quick, active hands at point of attack
– Flexible lower half allows ability to smoothly make blocks at first and second levels, handle bendy pass rushers
– In run game, plays with outstanding base and displays strength to control defenders
– Handles stunts and twists well, passes them off cleanly and efficiently
– Started 36 consecutive games to end his career, no injury or red flags

– Does not consistently pack his punch when making initial contact
– Anchor is pass protection needs work, often pushed into quarterback’s lap
– Issues with maintaining clean footwork, leading to Moore being off-balance
– Needs to be more forceful and deliberate after making initial contact so his opponent does not roll off of him
– Double team/combo blocks are hit or miss, does not always get great push off line of scrimmage

Texas A&M Left Tackle Dan Moore Jr. is one of the Senior Bowl participants who quietly put together a solid week against top level competition. Looking at Moore’s frame, his wingspan allows him to keep defenders at bay trying to bull rush him, making him a valuable depth piece to draft on Day 3.

William Bradley King tries to lift the outside hand to separate… UH UH. Moore has him in a vice grip. pic.twitter.com/24Z1i5YWjD

While he doesn’t always put defenders on the ground, Moore does a nice job firing off the ball, getting his hands inside of the defensive tackle, shifting his weight to his frontside leg and burying his man. Moore needs to consistently finish plays like this at the next level.

Moore has some athleticism in the open field to make kick out and lead blocks. On these two counter run plays, he makes key blocks while staying balanced to help spring some big runs. Against Alabama, he leads up and creates a heavy collision with the safety. Against LSU, the block isn’t perfect, but he kicks out the linebacker and creates a seam for the running back to explode through.

Active hands and flexibility in his lower half are two things that stand out in this two-clip gif. In the section of the gif against Florida, Moore is able to recover after his man counters his initial punch with a spin move, keeping his feet active as well as his hands to hold up in pass protection. In the second part of the gif, Moore replaces his hands after being too wide on the initial punch, sits in his anchor and stonewalls the edge rusher. Impressive reps from the three-year starter.

However, Moore struggles against long-armed bull rushes, especially when his defender has more length. Here against LSU, Moore is overpowered after engaging his hands too late and allowing his man to get his hands inside. He has to develop a better anchor so he isn’t being blown back in pass protection.

Sustaining blocks after initial contact and being more deliberate with initial punch power are big knocks on his game. Against Alabama, Moore is able to stop the defender for a moment, but his feet die and give the defender a path inside towards the quarterback. Half of the rep was on track, but he has to sustain his blocks better in all areas.

Dan Moore Jr. has an intriguing skillset and body type that should allow him to be viewed as a rotational piece on an NFL roster. The above average athleticism, the ability to mirror speed pass rushers and plenty of game experience will have Moore’s name called at some point on Day 3 of the draft.

In terms of his fit for the Steelers, Moore could be an addition to their depth on the offensive line, which has seen its fair share of injuries. Although he only played tackle in college, Moore could be a candidate that has the ability to slide inside and play guard as well.

Games Watched: at Alabama, vs. LSU, vs. Florida, vs. Vanderbilt